Review: HOSTAGE, A Youthful, Nostalgic Take On Growing Up Slovak 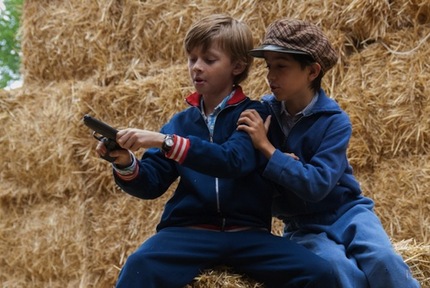 Recent Czech cinema has been gaining a reputation when it comes to revisiting history. Hefty award festooned mini-series-cum feature film The Burning Bush directed by renowned filmmaker Agnieszka Holland and Andrea Sedláčková´s sports drama Fair Play shaped moral heroes against an oppressive communist backdrop, elevating them on a pedestal to times not yet forsaken. As that goes Czech filmmakers don´t always paint life under dictatorship in such grey colours as Jiří Vejdělek proved in his maudlin yearning for adolescence in Tender Waves. Slovak director (and actor) Juraj Nvota adds his two cents with Hostage, which nods towards Vejdělek´s venture.
Nvota has already laid a critical eye on communist times in two films: his thriller The Confidant (set in 68´ Czechoslovakia), and the domestic drama Music, based on Peter Pišťanek´s short story. As the collaboration on Music bore abundant fruits in the form of awards and critical acclaim, the paths of Nvota and Pišťanek have unsurprisingly crossed again. Slovak producer Marian Urban found a story by the writer he deemed filmable, and they both started to pen the script while Pišťanek (who has a cameo in the film as a local butcher) managed to simultaneously write a book of the same name and story (with the subtitle Locomotives in the Rin) sideways. All three writers poured their own childhood memories into the story to render a life and world under a communist regime seen through the lens of a kid.
Due to the adapted perspective, the geopolitical setting is pushed on the fringe and our little protagonist Peter Achberger (Richard Labuda) is more preoccupied by friends, love and high jinks that naturally pertain to his age. The naive and pristine outlook on the life political-wise of a child weeds out labor of demonizing the regime or Communist party as the habit goes and leaves space to engage in more pleasant experiences which the writers fully embrace. This sly move enables them to place the insidious nature of previous regime in the background of their story.

For the majority of the running time, the film strongly resembles a trip down memory lane, overcrowded by tiny reminiscences on growing up. The writers have anchored a relatively loose storyline in the framework of Peter´s pursuit to reunite with his parents. As the political climate changed, Peter´s parents came to the conclusion that a considerably better life would be achieved through a getaway to nearby Austria. While the sneaking out of the country suddenly swarmed by green uniformed soldiers addressing everybody by the comrade title remains unexplained throughout the film, we find the little protagonist in the hands of his caring grandparents (the title refers to Peter´s family situation as he becomes a hostage in the country away from his parents).
Peter develops strong bonds with his grandfather (Milan Lasica) who doesn't treat him as a little kid not only because he is brighter than his peers. For that reason, he likes to hang around him while he works in parochial pub he owns, meeting place for locals and Communist soldiers in a relatively calm atmosphere. He is spared unnecessary bitter interactions between civilians and the extended hand of prevailing regime. Repetitive returns to the pub serves merely as constant remainder on the presence of soldiers as the protagonist rarely encounters them outside of his local.

The dispersed storyline consists of a series of Peter´s adventures equalling to chapters to which might be attributed catchy titles, describing the actual plot such as : How Peter found a pistol; How Peter saved a simpleton from his class; How Peter defended honour of his platonic love; How Peter was caught outside the border by a patrol and brought before a commander for alleged treason. The chosen structure and the content only pumps more nostalgia for childhood as style and mood was adapted accordingly. Despite revolving around children the film speaks directly to mostly adult viewers who share similar memories and escapades and coming-of-age in Communist Czechoslovakia.
Peter ogles a film reel his parents sent him from Vienna speaks for itself and it doesn´t need a second thought to decipher family is the keyword of the day. Besides, the nostalgia inundating viewers wields positive side effects of bringing a sober dose of sentimentality into the mix. Washing up memories on summers spent at grandparents may only accelerate the whole process.
Hostage boasts a wide array of notorious faces in Slovak and Czech stardom. Milan Lasica,  a Slovak seasoned and beloved actor (humorist, director and writer among others) was reasonably and accurately cast in the role of the wise grandfather. Lasica´s performance speaks for itself and it´s not hard to understand while Peter found his missing father figure in perceptive and witty grandpa.

The experienced and established Czech actress Libuše Šafránková staring opposite Lasica as his spouse has less screen time, and thus, plays a second fiddle. She frequently speaks Hungarian to pass secret messages to her husband, while her grandson is around and is the source of inside jokes ("He needs to learn Hungarian to become proper Slovak").

Childhood escapades are relived in the shoes of eleven year old Richard Labuda kicking off the third generation of actors. Little Richard had acquired some experience in TV serials and his talent sticks out compared to his peers taking on supporting roles.

Czech actor Ondřej Vetchý enjoys high demand for his on screen services. He already worked with Nvota in The Confidant, and slips into commie uniform as major Bašta, the highest ranking officer keeping an eye on the village.

Locals live relatively calm lives unharassed by stationed troops. Writers eschewed portraying those close to the ruling party as predators forcing everybody to collaborate with regime as certain like-themed films happened to do (with an exception for a revelation in the final act) and rather leaned towards communism with a human face at least in the provincial corner of Czechoslovakia cut from Western world where the story takes place. And Vetchý bears the human face at several occasions as his character proves he is not mindless minion of the regime. Szidi Tobias appears in a wonderful role of Peter´s class master and theatre hot shot Róbert Roth (of Miracle) as evermore drunken commie-hating blue collar worker.
Hostage itself yields somewhat ambiguous qualities. As a sort of bilingualism revolving around child characters, it addresses the adult audience about growing up in times in which the story is set. For a tragedy, it´s not enough tragic, nothwhistanding an unmotivated child death, yet it lacks more to be considered a comedy, despite its overall uplifting tone. As a sort-of biography there is too much fabrication. Although, the producers went for dramedy/tragicomedy pigeonhole.

Every aspect of the film has its own place in its own chemistry which often triggers a sudden rush of wistfulness, and on occasional a string of deep sobs, as it so happened during the press screening. The precisely calculated mix of ingredients and tender coating turn the film into instant crowd-pleaser.

Hostage is in general release in Slovakia and Czech Republic.

Do you feel this content is inappropriate or infringes upon your rights? Click here to report it, or see our DMCA policy.
Czech RepublicHostageJuraj NvotaMilan LasicaRukojemníkSlovakia