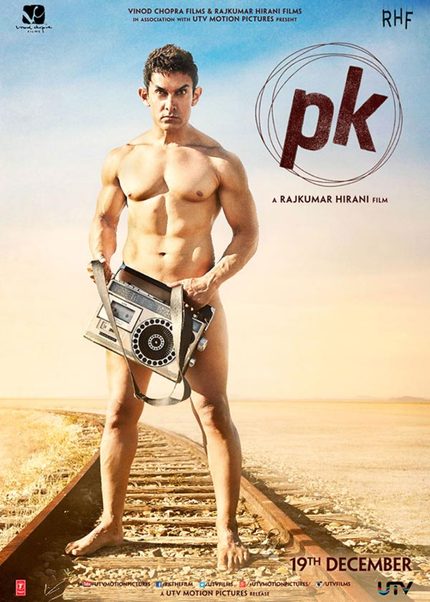 It's been five years since Bollywood blockbuster specialist Rajkumar Hirani destroyed box office records and made international waves with 3 Idiots. That film, with the help of an endearing lead performance from 40 something Aamir Khan as a college student, ended up making over $60 million dollars worldwide and playing in places that Bollywood had never been. Before that, Hirani wrote and directed the nearly as successful Munnabhai franchise, also huge critical hits that made mountains of money. So, suffice it to say, expectations for his latest film, PK, have been high.

Aamir Khan returns to the screen for his annual Christmas holiday film (2013 was Dhoom 3, 2012 was Talaash) as an alien who lands on Earth in the middle of dusty Rajasthan, naked as a jaybird and unable to communicate. In his first action as an ambassador to this planet, he runs at top speed, bare-assed naked, toward an appropriately unnerved nomad, who ends up stealing his only means of returning to his home planet, a large round sparkling necklace that PK, as Aamir comes to be named later, wears around his neck like a medallion. Alone in the middle of the Rajasthan desert, armed with nothing but the old radio he's managed to snatch from his attacker, PK wanders in search of his remote for the rest of the film.

From there the film jumps forward six months to Bruges, Belgium, where the plucky Indian university student Jaggu (played by the always reliable Anushka Sharma), has fallen in love with a Pakistani boy after they meet-cute in front of a poetry reading. Their love is not to be, however, as fate intervenes and their differences end up pushing them apart when Jaggu's parents consult their guru, referred to only as "His Holiness" in the subtitles, and the guru condemns the relationship to failure based upon the inherent evilness and deceit of Muslims. Crushed and determined to move on, Jaggu moves back home where she becomes a cub reporter looking for a big break.

In steps PK, a kaleidoscope of clashing colors and iconography, who catches Jaggu's eye when he hops aboard her train and begins handing out missing persons flyers with the faces of different Hindu deities. Determined that there is a story in PK, Jaggu persues him and winds up locked up with him in a jail cell as he spills the beans on his life thus far.

This is just the set up for the film, perhaps the first 40 minutes or so. From there on out, it's a non-stop ride through PK's adventures as an alien on earth searching for his way back home. Learning the language, learning where to find clothes (on his planet, nobody bothers), learning how to find food and shelter, learning everything he thinks he needs to know to survive. This story, which plays out in a long flashback that forms the backbone for most of the very funny running gags in the film, is probably a good barometer for whether or not PK is for you.

Rajkumar Hirani and Aamir Khan are an exceptionally potent team. Hirani leans a lot on old Bollywood styling to tell his story, with bombastic musical cues and fantasy transposition galore. This could actually be the kind of thing that gives PK a push beyond the usual Bollywood fare, though, as it's actually done well. PK is the kind of film that westerners are looking for when they want Bollywood. It is bright and colorful, it's music may not be burning up the charts, but it is properly placed and does it's job moving the plot along, Aamir Khan's permanently wide eyed performance is just over the top enough, but not so much as to make him unhinged, and most of all, it's just a whole lot of fun.

While the first half of the film is stridently dedicated to bulding an emotional attachment to our characters, it also very smartly sets up the main conflict that meets us after the interval. In his search of his lost remote, PK has made his way to the temple where he hears that God answers the prayers and requests of those who believe, he thinks that certainly a person with this kind of power could get back his remote control. PK tries one god after another to no avail. His childlike innocence allows him to ask the questions that adults indoctrinated into religion just never consider. After turns as a Hindu, Muslim, Jain, Sikh, Christian, and others, he decides that his best bet is to just try them all at once, and he does, only to learn that this religion into which earthlings put so much stock, is a futile and disappointing thing in practice.

So begins the second half of the film. Jaggu has found PK (which, by the way is HIndi for "tipsy", a nicknamed earned through Khan's repeated silliness and ignorance of human nature), and has decided, with his help, to take on the villains of organized religion who take from the poor in exchange for unfulfillable promises. This is no small feat in India. While Hinduism is the majority religion, there are sizable sects of pretty much all major religions in the country. So large and powerful these sects, that even the threat of offending anyone's "religious senitments" leads to frequent boycotts, official apologies, occasional violence, and tons of hot air. PK proceeds to poke holes in the practice of religion and not the actual tenets of faith, all the while gaining media appreciation for his unfettered ability to do so without fear of devine reprisal.

Similar ground was trod a couple of years ago in Umesh Shukla's exceptional Oh My God, where a shopkeeper whose business was destroyed by an "act of god" attempts to sue the man upstairs for restitution, but that film, while entertaining, was far more biting than PK. Hirani has no interest in infuriating anyone, only entertaining them by pointing out the hypocrisy that they live every day. PK's indomitable spirit pierces the bullshit that surrounds His Holiness by repeatedly poking holes in his verbal effluence that seeks only to make himself wealthy and his followers subservient.

Subtle, PK is not, but who wants subtlety in their comic spectacle? Aamir Khan has a reputation as a perfectionist, the kind of man who demands excellence at all times, and PK is just that, excellent. This is quite possibly the finest mainstream Bollywood film I've seen this year. It never reaches beyond its grasp, it never gets too preachy without first applying a bit of lubricant, but at the same time, it takes me on a journey where I can believe that a crazy bug-eyed, elf-eared alien believes that in the goodness of man, when men themselves, do not.

Attempting to explain all of the things that PK does well would just mean spoiling the fun, however, as I exited the theater last night, I found myself struggling to find a category in which it faltered, rather than where it succeeded. That has become a more rare thing. These days, when even the team of Farah Khan and Shah Rukh Khan can't make me laugh consistently, PK is a blessing. Even the tonal shifts from comedy to melodramatic love story work because they feel earned, and that is so rarely the case anymore. If you're looking for something a little bit outside the box and want a bit more than two hours worth of solid belly laughs, PK is definitely a solid choice. If you aren't more than a little familiar with India, a few things might go over your head, but the jokes that are universal make the whole thing worthwhile.