Raven Banner Wants To Rumble With Cthulhu! Tags In For PORTAL TO HELL Feature! 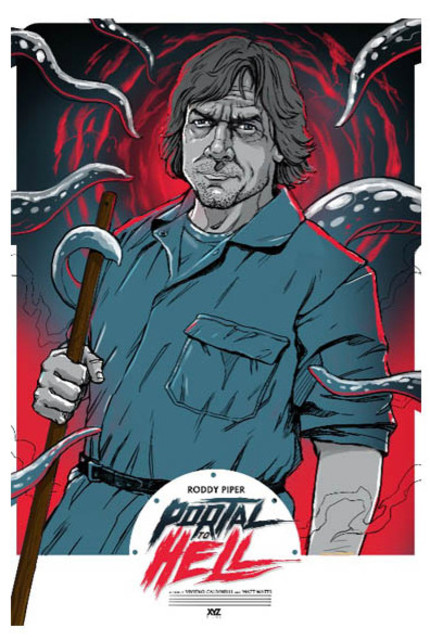 Well. That escalated quickly. This Canadian genre short film project just got a huge boost today. The fine lads at Raven Banner Entertainment have become so smitten with the Portal To Hell Indiegogo campaign that they have come on board to help with the feature film version. Raven Banner will handle Canadian and International sales while XYZ Films will handle U.S. sales.
The feature film will take a much larger view of the short film's unique world and follow the ragtag group's battle against Cthulhu on his home turf of R'lyeh.

"It's crazy and amazing. We're still in the middle of our Indiegogo campaign to raise money for the short film, and now we're gaining major interest for the feature version," says executive producer Andrew Rosen. "This boost in confidence will give our proof-of-concept short even more value when putting the feature package together. We're ecstatic to have great companies like XYZ Films and Raven Banner behind PORTAL TO HELL!"

"We've been like a bunch of kids in the playground, with our hands up wanting to join the game!" states Raven Banner's Managing Partner Michael Paszt. "What excited us most about the Indiegogo campaign was the team the producers assembled - particularly director Vivieno Caldinelli, writer Matt Watts, and special effects wizard Steve Kostanski. That, combined with their genuine passion for genre films, was the tipping point for us to want to be a part of Portal to Hell."

"Raven Banner have been great friends of XYZ for years now and we're huge fans of the hard work they've done to champion quality genre film in Canada and around the world," says executive producer Todd Brown of XYZ Films. "Yes, it's a horrible pun to refer to this as a tag-team but we couldn't imagine a better partner to have in our corner for PORTAL TO HELL. We're very excited to work with Raven Banner to bring the film to the world."

Both the short film's director Vivieno Caldinelli and writer Matt Watts will handle the feature film. Producers are Lori Fischburg and Ryan Reaney, Executive Producers are Andrew Rosen and Anthony Leo of Aircraft Pictures, Todd Brown of XYZ Films, Caldinelli, and Watts. Raven Banner will also join the feature film as Executive Producers.
If you haven't at least visited the Portal to Hell Indiegogo campaign site, you should. And if you have some money and your choice is to spend it on a Christmas present for grandparent who has everything, or, give yourself a Christmas treat of some campaign perks, the choice should be obvious.
(You've seen ScreenAnarchy Founder and Editor Todd Brown's name show up more than once in this and all article's related to the Portal to Hell project. He is partner at XYZ Films and a producer on this project. I'm writing this news up because I want in on this bandwagon and told Todd not to get in my way)
Tweet Post Submit

More about Portal To Hell