Third I 2014 Review: TITLI Watches The Ugly Caterpillar Emerge From Its Cocoon 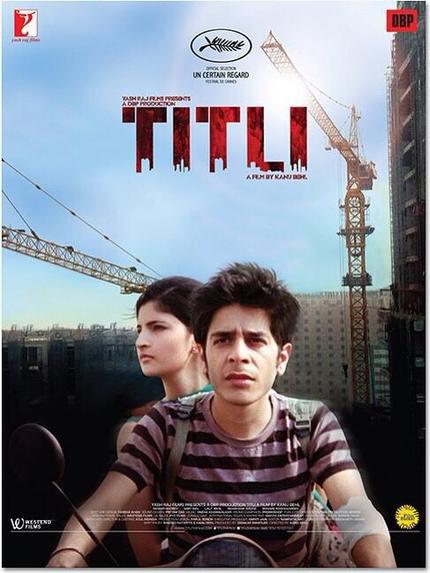 Titli. In Hindi it means butterfly. A feminine sounding word, Titli is also the name of the lead character in director Kanu Behl's debut feature film, and an appropriate name it is.
Titli is the story of a man struggling to make his way out from under the grit and grime that layers the backstreets of modern, corrupt Delhi. These scenes of people scraping the bottom of the barrel are nothing new in Hindi independent cinema, but Behl's treatment of the material is both heart-wrenching, and vividly relatable as everyone tries to make out the best way they can without leaving anything on the table.

Titli belongs to a family of crooks. His older brother, Vikram (played by veteran actor Ranvir Shorey), leads his younger brothers as they hustle, cheat, maim, steal, and even kill to earn their daily bread. Titli, played by a perpetually dour and put-upon looking Shashank Arora, has had enough of the bad life and wants to move on to something better, but there's no way out of the family except by force. Even when Titli asks his older brother for money to take courses at school to become a mechanic, his brother refuses, fearing that an actual job will weaken the family that steals together. Every time Titli inches closer to freedom, Vikram puts his foot down a little harder, crushing the young man's soul, once defeat at a time.

When Vikram's fortunes change from decent to doubtful upon his impending divorce from a wife who's just as sick of him as everyone else, he moves to ally himself with another family of unsavory means by marrying Titli off to Neelu, a pretty young thing played with vim and vigor by Shivani Raghuvanshi. Neelu is just as sick of her family as Titli is of his, however, Neelu knows what power she holds and she uses it to weild Titli like a sword against both her family and his as she carries on an illicit affair, using her new husband as a chauffeur and lookout.

Titli is all to happy to indulge Neelu's passions for another (married) man, as she wasn't his coice in the first place, but when things go wrong for Neelu as "the other woman", Titli and his wife find themselves in a heap of trouble with no clean way out. Titli conspires to doublecross everyone and break free for himself, but he's not the cheat that his family expects and the film ends up on a surprisingly upbeat note after nearly two hours of dour dalliances with pain and suffering.

Kanu Behl is the protege of one of mainstream Hindi film's most respected directors, Dibakar Banerjee, most recently of Shanghai and Bombay Talkies, and the two definitely share a love/hate relationship with the underbelly of Indian urban society. In Shanghai, Banerjee remakes Vassillis Vassilikos' Z in the image of a modern Indian developer's nightmare.
Kanu Behl's film is less concerned with the higher ups in the story, Titli takes place in the infinite and complicated transactions between the peons of corruption, the men on the street who scrape, rob, and kill to keep the fat cats happy. Titli, the character, seems to be the only one in the story who understands this dynamic and actively seeks to subvert it by taking himself out of the game, though he nearly ends up taking himself out altogether in the process.

The power in Titli comes from Shashank Arora's intrepid, but largely thankless performance as the titular character. While Arora's physical appearance in the film is that of a broken man, his spirit never quite gives up. When he's scouting for his brother's dastardly deeds, he plays along, but with a sense of deep despair and regret for each moment that he puts other in danger.
When he attempts to consummate his shill of a marriage and fails, it's only because he realizes all too late that there's no relationship to consummate. He realizes halfway through his attempt that he isn't trying to make love to his wife, he's sexually assaulting a stranger, and he recoils in disgust at his own actions. Each of these moments show a better Titli than he is allowed to be in his everyday world, and it isn't until he breaks all of his ties that he's able to become that man.
Yes. Titli is a bummer. It is a dark film with a low opinion of some of those people who populate Delhi's backstreets. However, it is ultimately a film about hope, and it's overwhelming sadness only makes the hope shine brighter. Kanu Behl has a bright future ahead of him, and I don't expect Titli to be his greatest film. I just hope I'm still around to see that one when it appears, because it will be something very special.