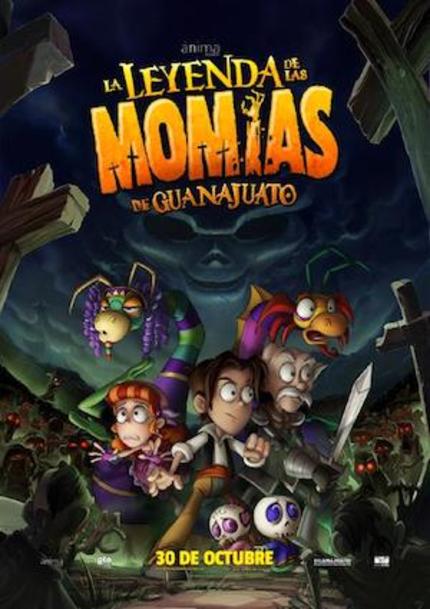 La Leyenda de las Momias (The Legend of the Mummies) is the third entry of a popular series of animated movies - for little kids - created by Mexico's Ánima Estudios.

The main concept behind these films is to showcase legends that are known in Mexico. As this third part reminds the audience, the Nahual served for the basis of the first movie and the Llorona legend for the second one. The series' protagonist is a boy who has defeated the evil with the help of his friends (a ghostly girl, a talking Alebrije, and a medieval old man). After being in Puebla and Xochimilco, for this new mission the team will travel to Guanajuato to meet the mummies.

Like the two previous films, La Leyenda de las Momias opened in Mexico during the Halloween and Day of the Dead season, and it's really more interesting as a product than as an actual movie. It's definitely rare that Mexican kids actually want to go to the cinema to watch a national animation, but this is the franchise that has achieved that (a third film is certainly just the consequence of economic success). It's also not very common to have nowadays at the multiplexes a flick that still uses traditional 2D animation. And the folks at Ánima Estudios have with this one an OK production in terms of animation; it's not the best, sure, but their real problem is in something even more essential: the writing.

Kicking off where the second movie ended, with one of the protagonist's friends lost in Guanajuato and the team trying to find her, La Leyenda de las Momias lacks enough coherence material to cover its entire group of characters. While the central narrative with the mummy problem is just as predictable as it is harmless, the rest of the movie is full of irrelevant moments that don't even make for a subplot.

On one hand, a new character is introduced; a girl whose miner father's disappearance might have something to do with the mummies coming back to life. She will become the protagonist's sidekick during this adventure, and maybe his future significant other, in what it is part of said harmless side of the movie. However, it feels as if the writers didn't really know what to do with the rest of the main characters, how to justify their constant presence.

This is when the film becomes random and very gratuitous; out of nowhere, the Alebrije meets another one of its kind, while the old man falls in love for a much younger girl. Besides those pretexts to make couples out of almost each individual character, there's the problem of the humor. I'm not sure why if the movie is set in 1810, the ghost girl makes jokes, for instance, about Facebook. Never mind the inaccuracy, it's simply not funny or relevant.

La Leyenda de las Momias offers little to older kids, not to mention to grown ups. A very tired reference to Gandalf's "you shall not pass" (from 2001's The Lord of the Rings: The Fellowship of the Ring) is the kind of material that a four-year-old might not get, and that's not enough to make us adults rejoice.

The film's lack of true identity is also quite disappointing. Why the Guanajuato mummies are so famous? Kids won't know about that theme after watching this. Hell, what's a mummy? That question is never fully answered, as the mummies in the movie become part zombie part ghost immediately. I'm not saying you shouldn't add some crazy French villain to wake up the mummies, but at least respect the concept of the series by exposing a Mexican legend. The third one is lazy even in that regard.

For little kids though there are several lessons to learn, as La Leyenda de las Momias features friendship, love not based on physical appearance, believing in yourself type of message, and it also tackles death. It's a basic message but good enough for a flick of this type, dealing with overcoming the passing of a beloved one and respecting the defunct.

But if we are going to talk about the movie's values, then I can't understand nor endorse that the new Alebrije is modeled after a stereotypical version of a marijuana user. With a hippie-like attitude, this colorful creature is obviously a reference to potheads, and the movie certainly suggests that (though drugs are never mentioned and children are likely not to understand anything of this).

In the end, a character like this one is one of many inexplicable choices, with no background, sense, or truly fun moments at all. In general, such a poorly written effort only suggests that the upcoming fourth film (a post-credits scene leaves the door open for a new - yet entirely familiar - adventure) is going to be another cash grab. We'll see.

Do you feel this content is inappropriate or infringes upon your rights? Click here to report it, or see our DMCA policy.
Anima EstudiosAnimationLa Leyenda de las MomiasMexican Cinema