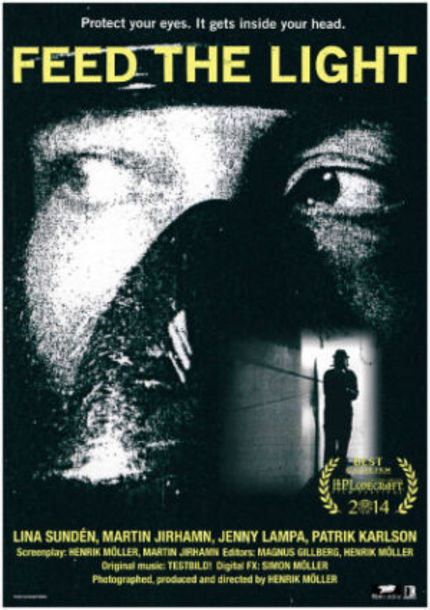 Never separate a mother from her child.

Sara is torn away from her daughter Jenny in the opening minutes of Feed the Light, a new film by Swedish director Henrik Möller that teeters between bad dreams and outright nightmares. Still furious, and learning that her ex-husband Jon has taken Jenny to an unmarked building, Sara gains access with her trusty knife -- and promptly finds herself in a job interview.

The building is a subterranean world of long hallways and tiny offices and cramped rooms. As a puzzled Sara (Lina Sunden) answers a few brief questions from a straitlaced businesswoman (Jenny Lampa), a naked man cowers under a blanket in the corner, whimpering like a dog for no apparent reason. When Sara is given the job (immediately), she is met by a menacing man who glares at her and speaks in non sequiturs and threats. She is barely "on the job" when she finds her ex-husband Jon (Patrick Karlson), who is referred to as "VHS," appears to have aged noticeably, and speaks of things that don't entirely make sense to Sara.

Oh, yes, and then there's the sparkling dust. It is explained to Sara that the dust can only be seen under the fluorescent lights that dot the hallways, and must be swept away, lest "vermin" be attracted to it. That is, apparently, the only duty that is assigned to Sara and her fellow "sweepers" as they toil in the underground of a very mysterious facility. Is it a factory? An office building? An educational or research or medical or government secrets-manufacturing facility? And what's the deal with the lights? Do they exert some kind of unearthly power over humans, or is something more sinister involved?

No matter. Sara is only there to find her young daughter, who periodically appears in brief visions to her. Chief janitor Martin (co-writer Martin Jirhamn) and Sara's ex Jon agree to help, and from there the movie becomes more claustrophobic and even more compelling.

The hypnotic movie follows dream logic, and very quickly I threw out most of my narrative preconceptions. Drawing inspiration from the work of H.P. Lovecraft, the story (in retrospect) is actually quite simple and plain. Although there are visual hints of David Lynch -- it's impossible to avoid comparisons with Eraserhead, since Feed the Light is also presented in striking black-and-white imagery that is occasionally fuzzy around the edges -- Möller is more interested in Sara as a very determined mother who will do anything to get her child back, no matter the nightmares she must endure.

Möller wields an impressive array of camera angles and shot selections, never quite exhausting the possibilities of the looming hallways, and a rather fantastic "creature" that is shadowy and indistinct and, frankly, quite creepy and unsettling. (And I write this as someone who was traumatized by the creature in Forbidden Planet.) Simon Möller's unsettling sound design and the pounding, rhythmic, intoxicating musical score by Testbild! contribute to the feelings of unease and tension that build throughout.

Feed the Light is the type of movie, nay, experience, that inspired the cliche, "It's not for everyone." Anyone who is open to a hypnotic, dreamy experience powered by a strong narrative drive, however, should seek it out.

(The film screened at Morbido Fest 2014 with Spanish subtitles. I wrote about that experience as part of a festival dispatch. Subsequently I saw the film again with English subtitles. It will screen again in Sweden on Wednesday, November 26.

More about Feed The Light