Cairo 2014 Review: JOY OF MAN'S DESIRING, The Poetry of Work 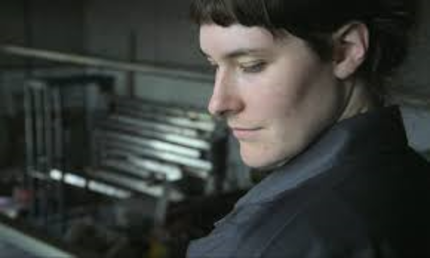 While many factory jobs have moved to countries like Mexico or China, Canada still has its fair share of manufacturing. Most of us probably don't think about where many of our goods come from, or the difficult and often repetitive work the creation of such goods entails. In his latest film, the docu-poem (has anyone coined that term yet? If not, I'm doing so now), Joy of Man's Desiring, Denis Côté paints a fascinating portrait of work in factories around Montreal.

The opening shot features a woman speaking to someone or something off-camera, about the work they are about to engage in and how it will bond them together. In fact, this becomes a central theme to the film, how the workers and the machines almost become one. The film is set up as a series of scenes that show machines and the people who run them. Côté moves between shots of various machines engaging in, well, whatever it is these machines do (I don't mean to sound like an idiot when I write that, but it is true that too many of us are ignorant of how our goods are made). He then focuses more on the workers, first at their machines and then in their leisure time, the stories they tell each other of their work and pain.

The camera is static for most of the scenes, and this gives the audience the opportunity to study the sight and sounds Côté is presenting. Unsurprisingly, there is a rhythm to the machines' mechanics that are almost musical; and I write 'almost' because I think it's hard to find true music in something so mechanical that it seems to strip the life out of its workers. If there is beauty in the movement and sound, it is one perhaps only an industrialist or capitalist could fully appreciate. But the static or slow-zoom shots (reminiscent of Jennifer Baichwal's Manufactured Landscapes) are toned to give the audience time for observation beyond the immediate, to contemplate how these instruments might be viewed by those who use them every day.

Many of these jobs are tedious, or so it appears. This is not to suggest that the workers are tedious. Côté shows workers who are skilled, efficient, funny, thoughtful, but also tired, and at times in great emotional pain. In the opening scene, the unnamed worker says to her machine, "Be polite, respectful, honest, or I'll destroy you." In a later scene, she describes to another worker how the machine has become an extension of herself, and not for the better. Another scene shows a worker telling a parable to his colleagues of how a labourer has to trick his boss into getting proper monetary compensation for his back-breaking labour.

This is not work out of love, but out of necessity, as a scene with one worker praying will show. It might be seen as noble by some, it might not always be hated even by workers, but it is need rather than joy that is seen, contrary to the title, which I'm guessing is deliberate. At 75 minutes, the film is perfectly timed, allowing the audience a poetic glimpse into a world that few know of, and a life that sustains much of western existence.

Do you feel this content is inappropriate or infringes upon your rights? Click here to report it, or see our DMCA policy.
Cairo 2014Denis CôtéJoy of Man's Desiring