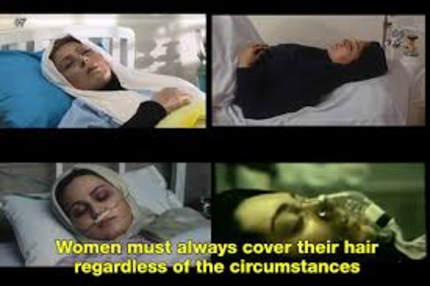 I'm sure many cinephiles are familiar with the Motion Picture Production Code, used by Hollywood in the mid-20th century to govern 'morality' in films. A self-imposed censorship, it banned any sexual acts beyond kissing, excessive violence, profanity, and many other acts that were considered immoral. While we can look on these now as not only being ludicrous, but hindering to a filmmaker's creativity, imagine if such restrictions were enforced by the government. You might have an udnerstanding of censorship restrictions on Iranian cinema. Iranian producer Jamsheed Akrami (who teaches in the US) explores this subject in A CInema of Discontent, a fascinating and educational look at how censorship rules have (mainly) hindered how filmmakers can express their ideas on screen.

The film includes interviews with Asghar Farhadi (A Separation), Jafar Panahi (Offside), and other filmmakers and actors, who talk about how they have had to work around the censorphip rules. It is pointed out that these rules are not written down; it is more of a 'known' code, but even as such, can often get confusing. For example, in Iranian society, a woman must wear a hijab in public, but when at home with family, she can remove it. However, in a film, these are not families in homes, but actors on a set; therefore, an actress must keep her hijab on at all times. Akrami shows a series of scenes from Iranian films where a woman is in bed or even blow-drying her hair while wearing a hijab, which of course is laughable considering how illogical and unrealistic that is. In another example, a man and a woman have come home out of the pouring rain. The man can use a towel to dry his hair, but the woman can only dry her face.

It is also forbidden for men and women to touch each other, even if the actors are playing husband and wife, or parent and child; because again, they are actors, not actually related. So kisses or hand-holding must be implied, either by showing the act about to happen and then cutting away, or keeping the action out of the frame. The exception to his, a horrible one, is violence; men can hit women, and of course women can hit men, though this rarely exceeds slapping.

While more often than not, these kinds of restrictions can be detrimental to a filmmaker, like the Production Code, it can also lead to creative invention. In a clip from one film, a woman tried to hug her father hello, but he keeps away from her, which leads to a story about their strained relationship. In another, in a film about a woman caring for her disabled son, she has to bathe him; but it is shown as silhouettes behind glass, so it seems an artistic choice rather than a way around the rules.

This, of course, is before even getting into criticism of the government or governing ideology, which is never tolerated. Even the lauded film A Separation had to abide by them, even when exploring the serious social problems of the rights of women and divorce. Many of the filmmakers interviewed are in self-imposed exile because they cannot create the films they want under these conditions.Bhaman Ghodabi (Turtles Can Fly describes being a filmmaker in Iran as 'torture', and most of those interviews describe more the frustration of working under imposing conditions; the few chances at creative exploration are simply not good enough.

Akrami interjects the interviews with lively graphics and animation to illustrate the points made, which add levity to an overall serious subject. We in countries without such censorship might laugh at some of the examples, but it is worth noting that many films, espcially ones from Hollywood, often censor themselves, often through lack of representation of women or people of colour, different sexual orientation, physical ability, etc. This is even without getting into political ideas or ideologies that might be seen as unfit for large-scale films, especially considering how important markets such as China are to many Hollywood studios.

Akrami has created a confident, slick and effective documentary, one that any cinephile with an interest in the creative control of filmmakers would take an interest in. While we might think that this could never happen in our country, it did for a time in the US, and there's nothing to say it might not happen again, especially considering how many filmmakers rely on government funding. Iran has a rich cinema tradition even considering the conditions under which it has had to work, and A Cinema of Discontent> opens up this industry and its difficulties to a wider audience.

A Cinema of Discontent

Do you feel this content is inappropriate or infringes upon your rights? Click here to report it, or see our DMCA policy.
Cairo 2014Jamsheed AkramiAsghar FarhadiBahman FarmanaraBahman GhobadiNoureddin KelkDocumentary