AFRIFF 2014 Review: OJUJU Is A Promising Effort From An Obvious Talent 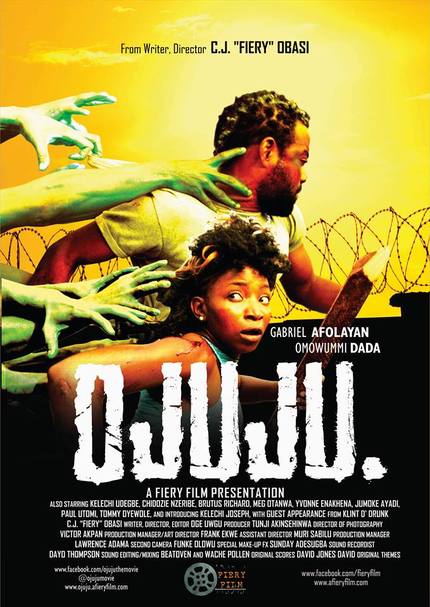 Winner of the Best Nigerian Film at the just completed Africa International Film Festival in Calabar - a prize it won over vastly higher budgeted major players from within the established Nigerian industry - CJ 'Fiery' Obasi's Ojuju is an intriguing exercise in tension and the transplantation of familiar genre tropes into an entirely unfamiliar environment. Though clearly limited by the miniscule resources at Obasi's disposal it nonetheless showcases the obvious raw talent of its creator while showcasing the flavor of the world's third most prolific film industry - an industry which is nonetheless almost entirely invisible to the rest of the world outside of sub-Saharan Africa - in terms easily approached and embraced by outside eyes.

The story begins with Fela (played by the charismatic Chidozie Nzeribe, who gave great villain in a few AFRIFF titles), a gravel-voiced neighborhood thug who controls the supply of weed in his local slum. Fela is doing what he does best - just shooting the shit and getting high - when approached by what he mistakenly takes for a very drunken local. He's very, very wrong. There's an infection in the local water supply and by the time Fela realizes the staggering walk is illness rather than alcohol the stumbling man is already on him, his teeth sunk into Fela's shoulder. And things begin to spread ...

Yes, Ojuju is - for all intents and purposes - a zombie film, one that follows all the basic tenets of the sub-genre albeit with budget constraints tight enough to limit the scope of gore, creature makeup and action and place a stronger emphasis on the characters and neighborhood. Which is absolutely fine, really, given that these elements all play to Obasi's strengths as a director.

What Ojuju lacks in scope and polish it makes up in authenticity and compelling characters. The rhythm of the neighborhood, with Obasi presenting multiple intersecting storylines and characters, rings absolutely true with the writer director easily managing the difficult trick of throwing in surprising and purely entertaining flourishes - young Kelechi Joseph steals every scene he's in as a foul mouthed neighborhood kid, for one - while also managing to keep things grounded. His characters are genuinely surprised by what's going on around them - a rarity in these films these days - and often slow to react because what they're seeing simply doesn't make sense to them. He establishes early that everyone is at risk at all times while also giving the audience a rooting interest in characters who they genuinely like.

Key on that front is leading man Gabriel Afolayan who delivers a refreshingly straightforward performance as Romero (yes, that's intentional), a local layabout trying to make good on his life and obligations now that his girlfriend is pregnant. Romero is a character in transition caught up in a neighborhood now also suddenly in a more violent transition with his newfound sense of responsibility put to a radical test, which gives his character arc a simple but believable resonance.

There is no question at all that Ojuju has its limitations. Created under harsh conditions with minimal resources and little to no infrastructure - the entire crew tallies just fifteen people, three of whom were responsible for makeup, with Obasi himself credited as writer, producer, director and editor - how could it not? But it also shows a clarity of vision and a broad base of skills that mark Obasi as a director to watch out for. Give the man some resources next time out and who knows what he may be capable of ...