Dustin Chang
Featured Critic; Brooklyn, New York (@floatingartist)
Tweet Post Submit
Johannes Bah Kuhnke, the hunky lead in Ruben Östlund's biting Swedish comedy Force Majeure, was in town to promote the film along with his director. I had a chance to chat briefly with the actor who plays a character carrying the burdens of all men.

ScreenAnarchy: I know you are mainly known as a stage actor. How did you get involved in this project?

Johannes Bah Kuhnke: Well, a casting agent called me and she wanted to set up a meeting with me and Ruben. So I went in and we started talking and I must've been the last one because we were talking for three hours. He finally looked at the watch and said, "Wow, we have to record something (for audition)". But then I knew I had this connection with him.

Have you seen any of Ruben's other films before you met him?

Yeah. When I saw it, what I liked about it is that there are so many different ways to see that film. Everyone has a different reaction to his films.

What did you think about FORCE MAJEURE when you first read the script?

I was trying to get at what it was about. We talked a lot about that. In a way I was hungry for playing something more complicated because despite of my age (42), I always get to play young lover types- uncomplicated, good looking. A man that women fall in love with. So I've been longing for this kind of role so much.

Nomally, in acting, you play a better version of yourself - more beautiful, smarter, sexier, more evil, something more attractive. This part was definitely the most unattractive side of yourself or in other people.

Are all Swedish men cowards?

[laughs] The film shows that every man in the world is a coward. If you saw the statistics in disasters, more man survive than women or children, not only because they are stronger, but they can be egoistic. There is the code of honor- 'Women and children first'. But as it turned out in Titanic, it was enforced under threats. There were guards with guns enforcing that.

Why would Tomas deny what happened?

I think that's where I don't agree with Tomas. You can act in such a way but if you face it, you are not weak. But I think it's also got to do with their relationship, their lack of communication.

When Ebba first breaks the silence is when she had a couple of glasses of wine in front of everyone. He then tries to save his ass and makes up lies that comes out of nowhere. He can't step back. He thinks that it will just pass. But it doesn't and he gets deeper into trouble.

You think there is a back story where things weren't going well with the couple even before they took the trip?

Some people who watched the film think they have a dysfunctional marriage but I think they are as normal as they can be. They are married for ten years. There are not many surprises left. You know they need to change the marriage bow - from "'Til the death do us part" to "Til you're bored to death do us part". 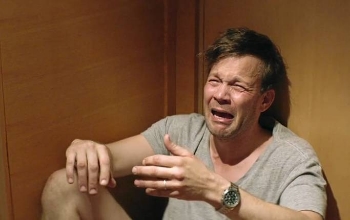 The scene where you break down and cry outside the hotel room and Ebba says, "you are not even really crying," and you start crying for real, like a baby, really interests me.

I think in the beginning he's trying to communicate with her. He just cry as a form of communication but it doesn't work. So the pressure is built up so much it just bursts out: that he was unfaithful and everything comes out. But I think that was kind of...catharsis for him. But he doesn't really take good care of the situation. It doesn't really lend very well to the situation. Because we have this idea of men crying in the movies: you usually see a stone faced man and a strand of tears rolling down on his cheeks and straight after that, there is some big decision that needs to be made. But we really want to make the scene really really over the top. I also found an inspirations on youtube- "worst man cry ever" and different daytime TV talkshows.

You did a great job!

I remember in theater school that there is a task when you do a scene in Macbeth where you wash the blood off your hands. You don't start out with freaking out and screaming, "Blood!" but you do it with "oh there is a blood on the tip of my finger, let me get rid of it, then "oh it's not coming off, let me wash it off," to "oh no it's all over my hand and I can't scrub it off!" You can find the right moments and right emotions and  build up until you can push very far to go over the top.

It struck me as a little boy crying.

Why wouldn't you cry like that now? What's the difference? Some social code?

It's this portraiture of male that is engrained in us by films and all.

Right. You don't want anybody see you crying. It's too vulnerable.

So, you are vacationing with your family and there is a catastrophe. What do you do?

Well, I'm not trained for those things so I don't know how I would react. But according to statistics, I would run. But I do hope that I could be strong enough to reveal my weaknesses. The problem with Tomas is that he can't live with the picture of him being like that.

It's one of those movies you take your date to see and make men very uncomfortable. I'm wondering what your wife thought about it and your performance.

Well...she despises Tomas. [laughs] That's funny because women despises male weakness and men gets aggressive on male weakness. There is no place for male weakness in our society, the structure that we built. There are some men who prefer weak women but I never met a woman who wants to be with weak men.

I think it's also the problem in this society to be happy all the time. You see face book and instagrams of all these happy smiling faces and perfect life. You want to be a role model for your children but then you stop being a human being. You are in fact, acting in real life to give the expression that you are feeling good.

So at the end, when she asks if he smokes and he says he does, I think it's a kind of happy ending because he lends himself to be more human, that he is not perfect.

Would you work with Ruben again?

Yeah, we've been talking about doing something.

Could you tell me a little bit about it?

We had one project before...it was based on an idea of a monk. There will be 12 actors playing monks, stark naked for three hours but it didn't really happen. There is another one that we've been talking about but I need to catch up with him to see where it is.

Do you feel this content is inappropriate or infringes upon your rights? Click here to report it, or see our DMCA policy.
force majeureinterviewjohannes bah kuhnkeruben ostlund