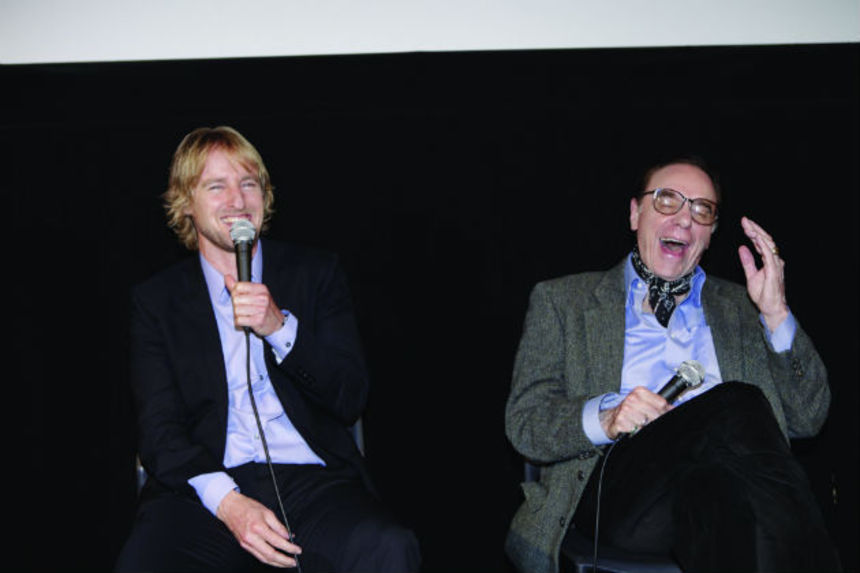 Peter Bogdanovich appeared on stage at the Tokyo International Film Festival last night to talk about his latest, She's Funny That Way.
The veteran director made his name with 1971's The Last Picture Show, though he'll always be Dr. Melfi's droll psychiatrist in The Sopranos to me. She's Funny That Way is a comedy drama starring Imogen Poots as an escort offered a large sum of money by a director, Owen Wilson, to give up her current way of life and follow her dreams of acting. Wilson, on his first visit to Japan, was also present to take questions from the obviously delighted audience.

Q. Where did you get the idea for this film? Was it based on some experience or is it from the imagination?

Peter Bogdanovich (PB): Well, I made a film in Singapore in 1978, a movie about an American in Singapore who wanted to be a pimp and wanted to open a whorehouse. We actually met several escorts, real escorts and we used some of them in the picture. A couple of them told me that they wanted to be back home, one of them wanted to return home to Bangkok and the other wanted to go back to somewhere else in Thailand and so I gave them money from the picture and told them to stop doing what they were doing and go home. The idea came from there, what would happen if a director gave a girl some money to stop being a prostitute and then he had to cast her in a play. That was the crazy idea, it started that way.

Owen Wilson (OW): It's great to be here this is my first time to Japan and Tokyo, what a great city.I just heard Peter talk about the genesis of the idea for the movie and even as you're saying it, it sounds so crazy. What would happen if a director were giving money to a girl to leave what she was doing and then to cast her in a play...
PB: With his wife

Q. In the beginning of the film Izzy (the prostitute character) was talking about the magic of the film, all movie fans can relate to this, to me all your films have this magic. How do you make that magic? Is it from direction or a technical point?

PB: I don't know. You just hope for the best. Obviously the main thing is to get great actors and Owen Wilson is about as good as it gets.
The whole cast was very, very good I liked everybody in the picture that's the main thing when you're directing, to work with the actors and get the best performance you can get out of them and they help you to be as good a director as you can be. It's a relationship, that has to work and in this case it worked very well. Particularly with... well with all the cast, but I'm a big fan of Owens and when he agreed to do the movie, then we had a movie.

Q. How was the atmosphere on the set, shooting with Mr. Bogdanovich?

OW: Well, first of all it was great to shoot in New York City, it seems like not many movies that are supposed to be set in New York City actually shoot there so to be doing a movie that took place in New York and actually be in New York and then to be working with Peter was just one of the great pleasures of my entire career. I think that I've known Peter for a long time, we met through my very good friend Wes Anderson and then Peter and I became friends. You never know how it's going to actually be to work with a friend but I feel that we emerged even stronger friends. That's one of the things people ask when you're making a movie, "Well, what's the movie? Who's doing it?" And I've never been more proud to answer that question than I was with this one because I really had an ace in the hole being able to say "I was being directed by Peter Bogdanovich".

Q. In the end we have a surprise appearance from a director, can you talk about that.

(Note: the following has been edited to avoid spoilers.)

PB: We thought we'd have somebody famous at the end and I said it had to either be a famous movie star like Leonardo DiCaprio or George Clooney or it had to be a famous director. Then the question was, how many directors are recognizable immediately? And the (director I chose) was about it. So, I know him, I've been friends with him a few years, so I called him up, told him about it and he said that's funny I'd like to be in a Bogdanovich picture so he came down and did it, it just took a couple of hours.
Q. Mr. Bogdanovich said he was very much looking forward to working with Owen but in the beginning Izzy's character says that you're such an ordinary looking guy, that she never expected you to be her prince charming and save her life, how do you feel about that?

PB: Well, that's just her way of speaking he's not meant to be some ordinary guy just some guy who wasn't Cary Grant. He was Owen Wilson.

OW: Well... uh... now that I think of it that is a good question!
Tweet Post Submit

More about She's Funny That Way