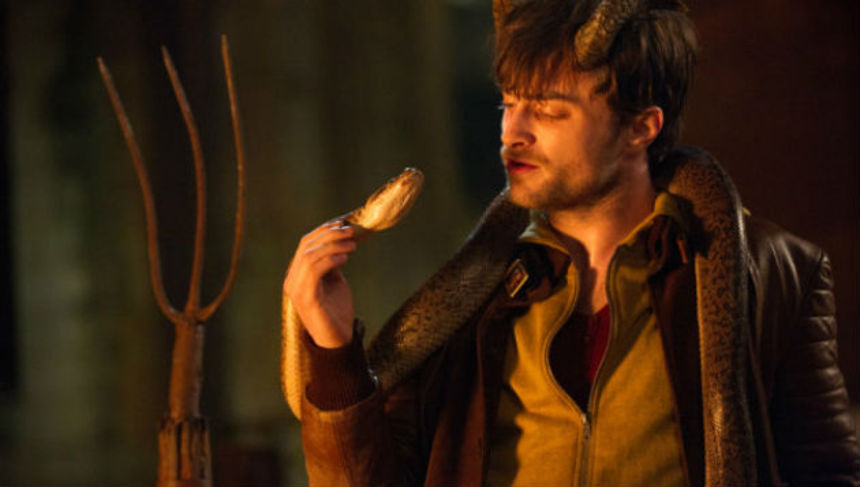 Two lovers, Iggy and Merrin, lay like Yin and Yang across a spread blanket in the leafy Washington State forest, their own little eden. They kiss while the camera looks on from heaven only to have it then quickly drill down into the ground to look up from Hell as we learn that, shortly after their playful kiss, Merrin is murdered and Iggy is kind of the chief suspect.

David Bowie's "Heroes" plays on a turntable before it is physically impeded to produce that ominously SLLLOOOOWW deep sound that only vinyl can produce. The town mourns the loss of Merrin, its Laura Palmer, the perfect girl struck down in her youth. This kind of crime brings out the worst kind of weirdness in small towns. It is impossible to miss the Twin Peaks-y vibe going on here; hell, Heather Graham is even serving coffee and pie at the local diner.

Iggy cannot convince anyone of his innocence, not his parents, not his future father in law, and least of all the salacious local news media, but all of this becomes a heck of a lot harder when he literally starts to sprout horns from his head. Is he becoming the devil the town is all projecting upon him with their accusatory stares?

I am all for jarring tonal shifts in films -- the Koreans do this kind of thing masterfully -- but the throwback towards 80s high concept fantasy and 21st century addiction on CGI and bloated run-times go together like oil-and-water. In spite of decent performances from the leads, there is something unflatteringly off about the storytelling and plethora of secondary characters.

Director Alexandre Aja, the storyteller, appears to have peaked with Haute Tension a decade ago when he kicked off the new wave of French horror. His American work is glossier, but more muddled. While Horns is a step up from Mirrors or Piranha 3D, it is still muddled. He can never seem to focus on what is important, that is, the love story between Iggy and Merrin. Cutting away for lengthy flashbacks, revenge story theatrics, and procedural sleuthing may work well in long form TV, but every element here feels sloppy, rushed, and undeveloped.

The film has a heyday with Iggy's horns, giving him a kind of super-power to bring out the worst kind of pettiness in people. The tone is over-the-top silly, more Joe Dante than Dante Alighieri: a woman comically gorges on donuts, inhibitions and propriety are thrown out the window, a doctor drops all levels of professionalism to screw his nurse, and the media have a literal scrum over a scoop. 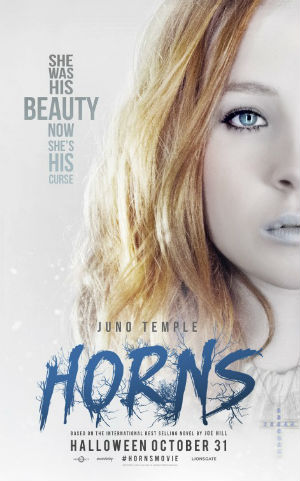 When this power prompts his family and friends to confess and misbehave, it becomes almost unbearably tragic. Separate scenes with Iggy's mom and dad, played by Kathleen Quinlan and James Remar, see both parents reject their son in a very raw manner. A scene involving Merrin's father, a tiny but pivotal part handled by the always reliable David Morse, plays out with the kind of dark poignancy -- "She was my favourite thing about you" -- of a Stephen King novel. This is perhaps no surprise considering Joe Hill is the Horror Master's son.

Radcliffe shines as the confused, lovesick protagonist who may or may not be losing his mind -- cue the too-familiar Pixies song -- but too often the film does not seem to want to be as serious as the material is being treated. Just when you can sink your teeth into some real drama, all is utterly dropped for computer-generated snakes and silly revenge plotting. Shift gears again to all sorts of cutesy sight gags: pitchforks, including Eve's Diner with an apple logo and a jazz bar that looks like Hell's favorite nightclub or something out of a Tex Avery cartoon. The most egregious sin is how it equates two homosexual policeman with evil, or even worse, cheap chuckles, for clumsily coming together.

I might be on board with all of this, even if things didn't culminate in another boring CGI smackdown finale, but the resolution is far too much concerned with the film's mishandled love triangle (featuring Max Minghella, horrible) and not concerned enough with, as the film puts it, making the Devil the hero. Juno Temple plays a corpse, or an ideal object, for much of the film and thus lacks agency or depth, further weakening the credibility of the love story.

The only thing that all the confused flailing about of Horns convinced me was that I should probably quietly settle into a comfy chair with the book.

Review originally published during the Toronto International Film Festival in September 2013. The film opens in select theaters in the U.S. on Friday, October 31. Visit U.S. distributor Radius-TWC for more information.