Don't Answer The Door For Mike Chester's TRICK OR TREATERS 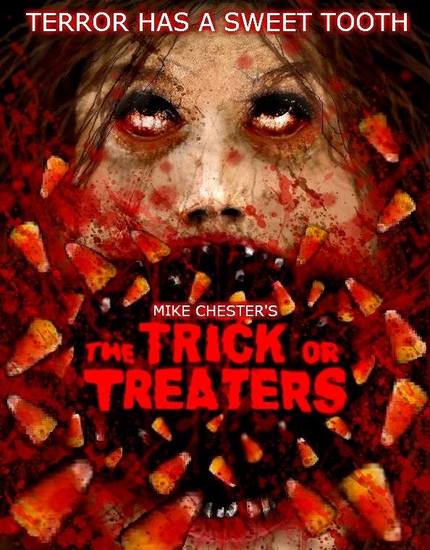 A major pet peeve of mine is the casting of actors in their late twenties or early thirties to play teenagers. Yes, it's been going on forever and I understand the mechanics of why it happens but it remains a point of irritation nonetheless. No such problem, however, with Mike Chester's The Trick Or Treaters.

A Halloween themed found footage horror film directed by Chester while still in high school himself the trailer for this one makes great use of that authenticity along with the fact that Chester seems to know his way around both the edit room and the SFX studio.

Every year strange events are captured on camera, some are unexplainable, while others are unbelievable. On the night of October 30, 2012, multiple people were attacked and murdered within their homes. The shocking events of that night were documented on two video cameras.

During a mellow pre-Halloween night of drinks, pranks and old horror films, Amy and Jake film a last minute schedule video for their school's annual Halloween fundraiser, but they are quickly interrupted by a strange group of trick or treaters, also equipped with a video camera. What Amy and Jake think is a prank by their friends, they ignore the strange interruption and continue with their night. As strange things continue to occur and escalate to an extreme level, the students quickly discover that they are dealing with dark individuals, and they don't want candy.

Experience the terrifying night in the perspectives of the victims and The Trick or Treaters.

Do you feel this content is inappropriate or infringes upon your rights? Click here to report it, or see our DMCA policy.
found footagehalloweenHorrorMike Chestertrailertrick or treatersVeronica Scott