Crowdfund This: THREE FINGERS, A Female Portrait Of War... After War 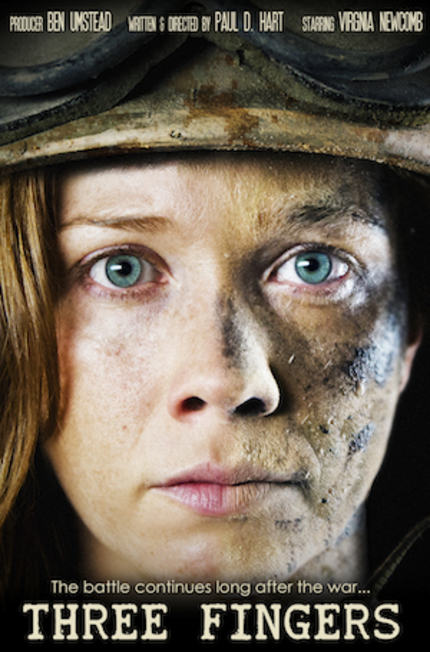 There are a lot of nifty looking crowdfunding projects that pass through the halls here at ScreenAnarchy. Plenty of those are worth your time, so why should Paul D. Hart's short film Three Fingers be of particular interest to you?

First up, its focus on veteran's affairs, women in the military, and post traumatic stress is timely and fascinating stuff. Meanwhile, the filmmakers' approach sounds compelling. For starters we've got that evocative poster image to your left, and an informative pitch video, embedded below, setting a sensitive, somber mood. But what's the story you say?

Set in the America South, Three Fingers follows Jessie, a female marine veteran of Afghanistan, as she navigates her disintegrating home life after her time in the war.

Director Hart and actor/producer Virginia Newcomb were kind enough to share a few words with us on their approach to the film.

"There is little dialogue in Three Fingers," says Hart,  "which challenges me to tell a visually intimate story -- to show the audience Jessie dealing with her psychological war-wounds almost as though they are standing in her shoes." Newcomb adds: "My fears have always been a marker for my creativity. Jessie's struggle resonates with a part of me that I'm afraid of. I think we all understand darkness and if we can embrace the darkness in ourselves we can bring light to others. It's why I do this."

Also of note are some of the intriguing talent Hart and Newcomb have on board. Musician Sarah Lipstate, aka Noveller, fresh off a tour with St. Vincent, will be bringing her atmospheric guitar stylings to the film as composer, while Ugo Derouard, sound designer for zombie rom-com Life After Beth, is set to weave a psychologically wrought soundscape. And then you have Ben Umstead, ScreenAnarchy's very own East Coast Editor, up to bat as producer. Pretty cool that.

Set to shoot in Nashville later this fall, the team is looking for production and post funds to the tune of $18,000, an achievable goal in the grand scheme of things. Most of the project's incentives are based around honoring vets and active service members, which is a swell approach, and emphasizes the team's commitment to further engaging in a larger dialog on mental illness and veterans affairs.

Check out that pitch video below, and click here to chip in on the film's Seed&Spark campaign.

Do you feel this content is inappropriate or infringes upon your rights? Click here to report it, or see our DMCA policy.
ben umsteadCrowdfund Thiscrowdfundingmarinesnovellerpaul d. hartPTSDsarah lipstateseed&sparkthree fingersveteransvirginia newcombwomen in the military

Sounds very interesting to me as a female Marine. I started and am now a moderator for a private/secret Facebook group of female Marines who are MST survivors. Most battle with PTSD from the MST and a few other service related traumatic incidents during the Vietnam era through the current War on Terror. The group is large, which makes me sad. However, there is a beautiful comradeship that has developed and everyone is supporting/providing resources to one another. I want to stress to the writer and the actress that female Marines are super tough, yet deep inside lives Daddy's little girl, the girl next door, the girl who played house and with Barbies, the girl who dreams of her knight in shining armor and even the girl who wants the house with a white picket fence. Society has molded us into these pink wearing girls. A very small percentage of us join the Marine Corps. The Corps brings out the best and worst parts of us. We fight and do our jobs during demanding, high-tempo schedules. Then, when our time is up, we return home and society and everyone who loves us wants us to be that girl we were before we joined. They want to put us back into a mold. Not gonna happen! I could go on, but if you want to know more, just contact me. Semper Fidelis!

Thank you kindly for the message! Please check out the film on Facebook and message us there: https://www.facebook.com/three...

Would love to hear more from you, and thank you for your dedication and service.