Watch This Pair Of Teasers For Miike Takashi's AS THE GODS WILL! 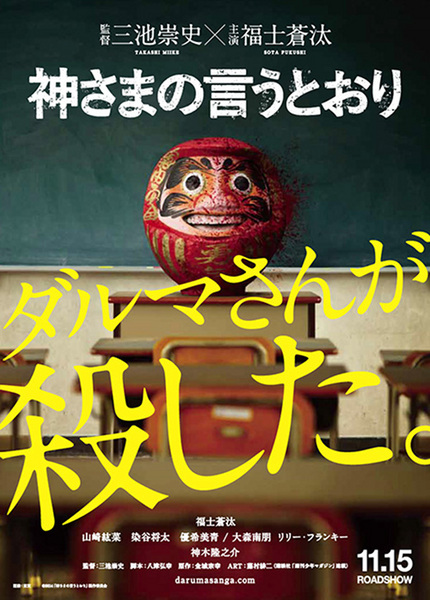 ScreenAnarchy is nothing if not a fan site for Japanese enfant terrible Miike Takashi.

Miike has broken open the world of international genre cinema more than anyone else in the last twenty years. From his origins as a director for hire on Japanese V-cinema gangster flicks in the early '90s to the present day, there may not be a single working director who has shown the kind of range as he has. While his 1999 breakthrough film, Audition, did make him a name to watch on the festival circuit, it was his later films like 2010's 13 Assassins remake that pushed him closer to the ever elusive mainstream conciousness.

In the last four years, the relentlessly productive Miike (94 credits as a director since 1991, and 11 since 13 Assassins), has managed to quell the concerns of superfans, like myself, who have worried that he may have gotten soft since his international recognition. Miike has answered this with directorial efforts that range all over the map from kid-friendly period pieces like Ninja Kids!, to high school hoodlum musicals like For Love's Sake, to hard-boiled crime drama/horror films like Lesson of Evil. It is from the mold of that last film that his latest, As The Gods Will appears to have sprung.

Miike seems eager to go back to his roots, as his recent films like Over Your Dead Body and Mole Song: Undercover Agent Reiji appear to confirm. As The God Will is another feature based on a popular manga that is described thusly on AsianWiki:

One day, a teacher's head explodes in class. Shun Takahata and his classmates are forced to play a game of death without knowing who, why or how.

Sounds good, and the pair of teasers we dug up look pretty damned good as well. With Miike in the mix, it's hard to go wrong. There is plenty to explore on the Internet if you want to know more about the manga, but I think these teasers speak for themselves. I'm excited (once again) for this one. What do you think?

As The Gods Will opens November 15th in Japan.

Do you feel this content is inappropriate or infringes upon your rights? Click here to report it, or see our DMCA policy.
as the gods willjapanmiike takashi