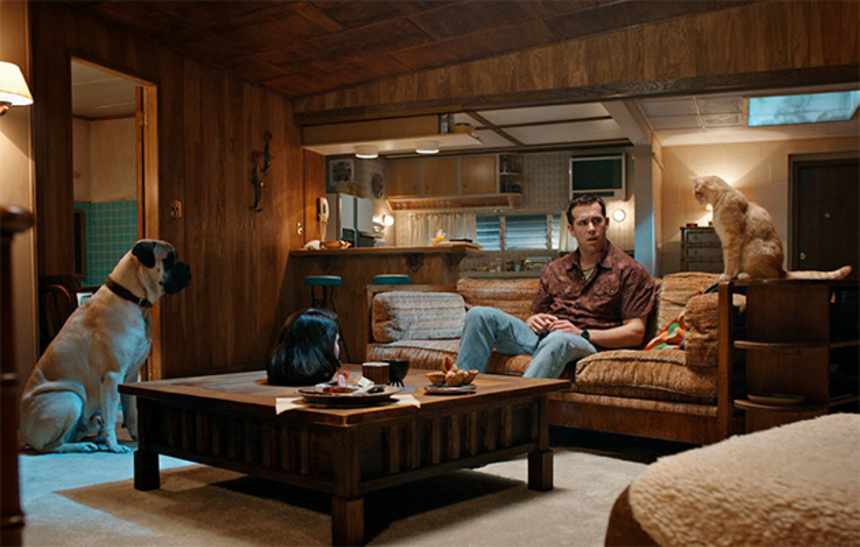 It's days after I saw it, and I still haven't decided if Marjane Satrapi's The Voices is sublime or shit. I think, frankly, that it's an unholy combination of both, a mess of a film that still has moments that beyond any credulity actually work.

Toeing a very fine line between comedy, horror, and melodrama, the film stars Ryan Reynolds as Jerry, a forklift operator in a small industrial town called Milton. It's clear pretty early on that Jerry's got some issues, and behind those shiny eyes and capped teeth there's a darkness brewing. Joined by a cast that includes Jacki Weaver, Gemma Arterton, and Anna Kendrick, the film plays like a soap opera directed by John Waters after he binged on too many Hitchcock films.

Again, I'm genuinely torn here - coming out of the theatre I though the whole thing was a hot wet mess, but for some reason it's growing on me. Maybe it's my own tendencies to look at my cat and imagine it speaking murderous vengeance in a Scottish accent, or maybe it's the Brady Bunch-like finale that's a hit on the head to not take things too seriously.

Whatever it is, Satrapi (best known for 2007's animated film Persepolis) has crafted a kind of live action cartoon, one that writhes in its kitchiness in a way that's sure to please many who worship dreck. Reynolds is perfectly plastic in his neo-Bates role, barely emoting at even the most ardent and harrowing moments.

The metaphor about seeing the best when the reality is blood and gore is hardly subtle, but the Betty Crocker delusion and small-town whitewashed Americana can certainly be grist for the mill of those who wish to ascribe this flick as a bleak take on the American dream, with a poisonous core shaped by delusion, religious fervour, and madness. Yet the film never succumbs to being dour, its heightened levity constantly undermining even the most sordid of events.

I can't completely let the film off the hook -- there are entire swaths where the shtick grinds to a halt, and silly action sequences are clumsily and tediously executed. Still, the film does well when it undercuts its own treacle, reminding us in subtle (and sometimes not-so-subtle) ways that the filmmakers know exactly the road they're taking us down, and that we should just sit back and enjoy the ride.

The Voices is a silly, schizoid film, but for some it may be profound, reveling in its collision of ideas and tone. I was too quick to dismiss it, and some may be too quick to praise, especially based on the pedigree of the director. Still, this is a weird and at times engaging little romp into the heart of darkness, a film that's sure to be miles different than anything else you're likely to tackle this year.

Do you feel this content is inappropriate or infringes upon your rights? Click here to report it, or see our DMCA policy.
Anna KendrickMarjane SatrapiRyan ReynoldsTIFF 2014

More about The Voices