Review: JIMI: ALL IS BY MY SIDE, A Momentously Audacious Musical Biopic 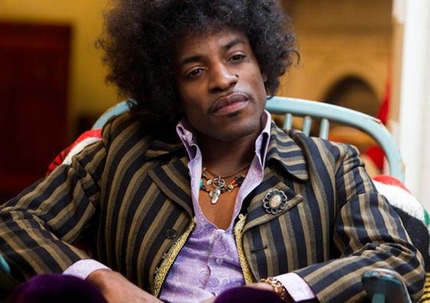 Making a movie about a musician is bound to be extremely difficult when you don't have the permission of the family's estate. Why has there never been a definitive Elvis biopic -- or Kurt Cobain either, for that matter? Because what would be the point if you couldn't secure the rights to any of the music needed to tell these musical superheroes' origin stories? John Ridley tackles these questions head on with his Jimi Hendrix biopic All Is By My Side, which doesn't feature a single lick of original Jimi arrangements. The answer: a resounding "it doesn't matter." Jimi: All Is By My Side is a captivating tale of one of rock 'n' roll's most enigmatic men, told with beautiful and audacious style.

Focusing on the year or so leading up to Jimi Hendrix's coming out party at the 1967 Monterey Pop Festival, Ridley tells the story of Jimi through Hendrix's interactions with those closest to him: his bandmates, his manager, and most importantly, his women. Andre Benjamin (Andre 3000 of OutKast) plays the guitar god and his resemblance is remarkable. The performance is anything but precious with the man's violent tendencies and devil-may-care attitude exhibited in all their warty glory. But, boy, could that guy play, and the movie is loaded with a carefully selected collection of covers and jams to exhibit his musical genius without running afoul of the copyright cops.

Imogen Poots plays Linda Keith, the British rock aficionado (most notably known as Keith Richards' girlfriend) who discovers Hendrix as a backup guitarist in a New York club. The chemistry between Linda and Jimi is electric and Poots may be up there as the easiest actresses with whom to fall head over heels in love. Linda introduces Jimi to the Animals bassist Chas Chandler (Andrew Buckley) who agrees to manage Hendrix's fledgling career and eventually convinces him to come to London to record an album.

Once in the UK, Jimi meets Kathy (Hayley Atwell), a groupie who takes immediately to the task of netting the American. Kathy's crass Cockney ways are in stark contrast to Linda's posh demeanor, which leads to obvious conflict between the two. Having girls fighting over him doesn't seem to bother Jimi at all, though his relationship with Kathy is strained by her often bad attitude. Eventually the takeaway from all the focus on interpersonal dynamics is a clear understanding of Hendrix's living-life-as-it-comes philosophy. Though the story stops well short of Hendrix's death, it's obvious this attitude plays into the way he died as much as the way he lived.

The real discovery of Jimi: All Is By My Side is the bold direction by John Ridley. Most famous as a screenwriter (he wrote 12 Years A Slave as well as Redtails), this is Ridley's first feature since his 1997 debut Cold Around the Heart. Here he employs extremely bold stylistic decisions, such as dropping out the audio during less important moments of dialog or cutting to archival montages to help set the place and time. Frankly, they all work beautifully and serve as a unique and impressive counterpoint to the heavy character work throughout.

Do you feel this content is inappropriate or infringes upon your rights? Click here to report it, or see our DMCA policy.
Andre BenjaminHayley AtwellImogen PootsJohn Ridley

More about All Is by My Side