Dustin Chang
Lead Critic; Brooklyn, New York (@floatingartist)
Tweet Post Submit
3D seems like it is here to stay, for now.
It was a gimmick to win back the audiences the film industry lost to the emergence of TV in the 50s, now it is revived as a last ditch effort to save the ailing industry, probably until TV starts broadcasting its contents in 3D (as we all know, it's only a matter of time that we'd be enjoying our football games and movies at home with silly glasses on). But can this new/old technology be elevated onto an art form, rather than being used exclusively to show us a mangled hunk of metal/asteroid as it hurtles toward us? If Werner Herzog's awe inspiring Cave of Forgotten Dreams and now Jean-Luc Godard's Goodbye to Language are any indications, the answer is yes. Yes it can.

Always on the forefront of visual experiment and testing the limits of cinema, 3D seems to be a logical next step for Jean-Luc Godard to sink his teeth into. After his test run with the technology in a short Three disasters (his contribution to an omnibus project, 3X3D), JLG, at 83, is fully committing to the 3D technology with Goodbye to Language.

The film starts with a quote, "Those lacking imagination take refuge in reality." With that, there is a slight narrative, concerning a couple (or two) as they bicker and contemplate murder. Women in the film are very much alike (a typical Godard heroine archetype- brunette with dark eyes) and tend to shed their clothes often. An outdoor book market becomes the flash point for the old and new. While browsing for books by Dostoevsky, Solzhenitsyn, people furiously text and exchange their mobile devices. The bookseller shouts from his chair, "Don't bother googling Solzhenitsyn!"

"One day everyone will need an interpreter for what he says." One of the characters utters in the film. Its biblical implication of the world in chaos aside, the film is packed to the brim with visuals. Divided in 2 parts or at least in that Godard's typical chapter headings - Nature and Metaphor, the film grimly/comically announces the death of language.

The most vivid character is perhaps a dog named Roxy (Godard's beloved mutt), who graces the screen with his adorable face in about half of the 70 minute feature, playing around in nature, in all four seasons - near lake Geneva I'm assuming, generally having a good time.   Godard's contemplation of war is there, but this time, not as specific or pointy as in his earlier films. Still, playing cinema's enfant terrible, he includes shots of burning bodies, and even graphic sex images. The sporadic, jumbled subtitles and dialog appear and repeat, accompanied by equally disjointed soundtrack - Beethoven and Tchaikovsky. 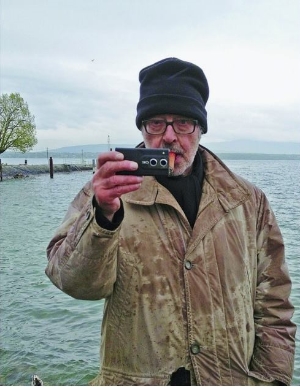 Layering clear HD, pixelated DV, and other grainy archival footage as thick as Dostoevsky novel, Goodbye is denser, more uncompromising, more impenetrable and less coherent than Godard's last outing, Film Socialisme (which I adored). But it's still a marvelous trip. OK. let's talk about the 3D aspect of the film. There is the usual JLG droll word games with his trademark bold titles-- Adieu (in Adieu au Langage) becomes AH, DIEU (Oh, God). Only this time, it's in 3D! People's everyday actions and nature scenes, like drinking from outdoor water faucet or a sunset or sunflower field on a windy day, become cinematic events.

Imagine some of the most visually sumptuous JLG films from his later period. Nouvelle Vague (1990) or Hellas Pour Moi (1993) for example - the ship sailing by in the background, the foggy field, swinging light bulb overhead, a long dolly shot looking through the window. Now picture them in 3D. This is what Goodbye to Langauge is like. It's a thrilling visual experience and I thank god for JLG embracing the gimmicky technology and using it in his tireless exploration of the boundaries of cinema. Ah-Dieu indeed. It's certainly one of the year's best.
Goodbye to Language made its debut at this year's Cannes Film Fest, then screened at the Toronto International Film Festival. It is playing at the New York Film Festival on September 27 and October 1. Please visit FSLC's website for more information.

Do you feel this content is inappropriate or infringes upon your rights? Click here to report it, or see our DMCA policy.
Jean-Luc GodardNew York Film FestivalHéloïse GodetKamel AbdeliRichard ChevallierZoé BruneauDramaFantasy