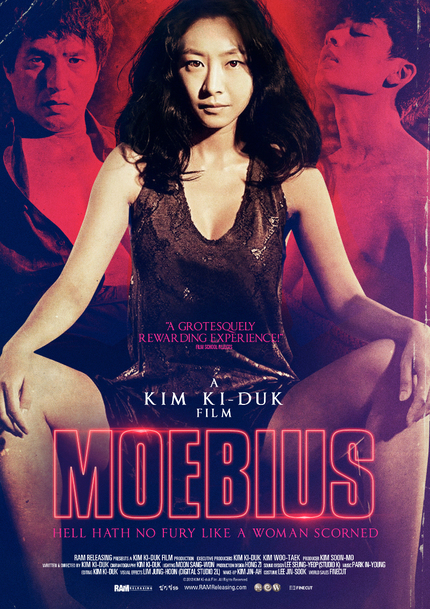 Korean auteur Kim Ki-duk's Moebius hit limited release and VOD platforms across the US on Friday and in connection with the release we had the chance to ask the director a small handful of questions. Curious why there's no dialogue in the film? Or why he has one actor playing multiple parts? So were we! Read on!

You're no stranger to mute characters, but why did you feel the need to use no dialogue in Moebius? Did you feel that the story spoke for itself?

The films I make often have limited dialogue or muted main characters. However, all of the characters are muted in this film. I wanted to give emphasis to each scene through noises in the film such as screaming, crying, laughing and other ambient sounds.

Writing a script that doesn't have dialogue is both a difficult and interesting task to work on since every action in the script has to be written in detail in order to be understandable.

It was comparably easier for me because I am used to writing this kind of script. I think viewers were capable of understanding the story, and were also able to interpret the film using their own imaginations.

Seo Young-ju was still a teenager when you filmed Moebius, which is one of your more extreme films. How did you cast him and how was his experience on set?

I thought Seo Young-ju was a good actor when I first saw him in the film Juvenile Offender, and I cast him as a main character during the script reading session when I found out that he had an exceptional ability to understand the script. I think he did an excellent job in the film.

Why did you cast the same actress as both wife and mistress?

Two actresses were originally cast for the two roles, but one of them left out a day before the shoot. I almost thought about canceling the entire shoot, but I eventually decided to give the mistress double roles after discussing with her and the husband. As a result, the film became more interesting and meaningful. I think it was destined to happen.

You've had difficulty with censorship in Korea in the past. Can you describe your experience with this film? Do you feel it is important to keep pushing those boundaries?

I have to be cautious about making films due to sexual and political issues caused by my previous films. However, it is a more tolerant deliberation compare to that of China. It is okay as long as you control the level of violent, sexual and political expressions. What became an issue in Moebius is the incest scene between the wife and her son. If you look at it closely, this scene is actually a part of son's dream and not something that really happens in the film. However I have to follow what the judges say in order to release my film.

Which film caused you the most difficulty on release?

Moebius was edited three times because of the censorship. There were about two films that were accused of sexuality, but those films passed the censorship after they were edited only once.

You sometimes appear as an actor in your own films, is there a director you would like to act for?

I have never thought of it because I am not a good actor. But I am willing to do it if someone suggests me a good character. I am also thinking about acting in my own film as a main character.