Fear and Loathing at Comic Con 2014, Part IV: The Conclusion 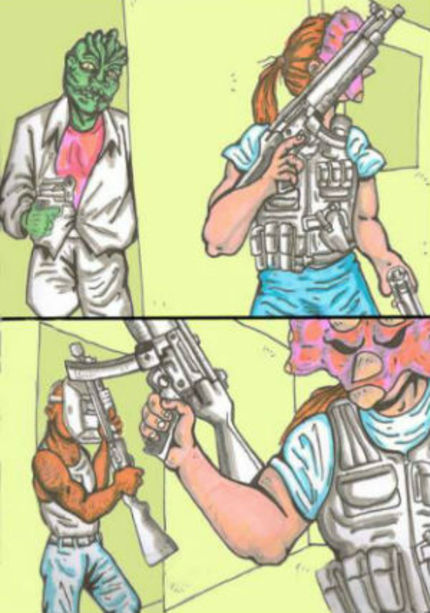 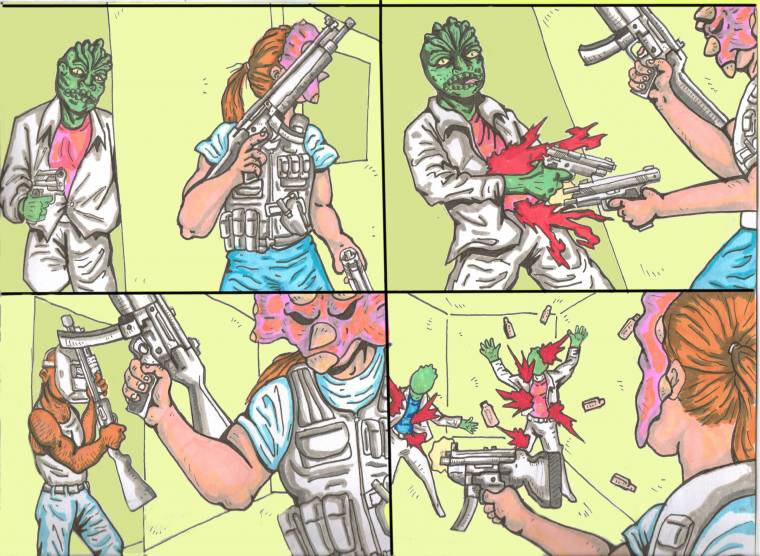 I can't find the piece that completes this puzzle so I might as well throw the whole damn thing out.
Pump, Pump, Boom! 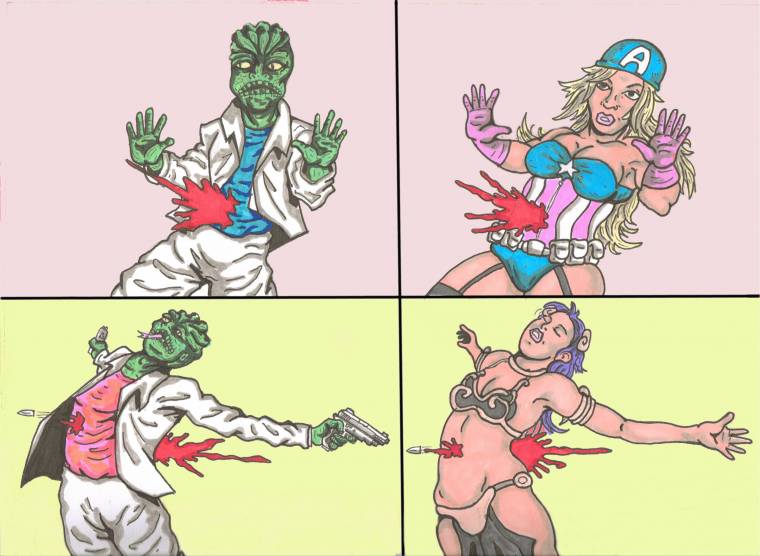 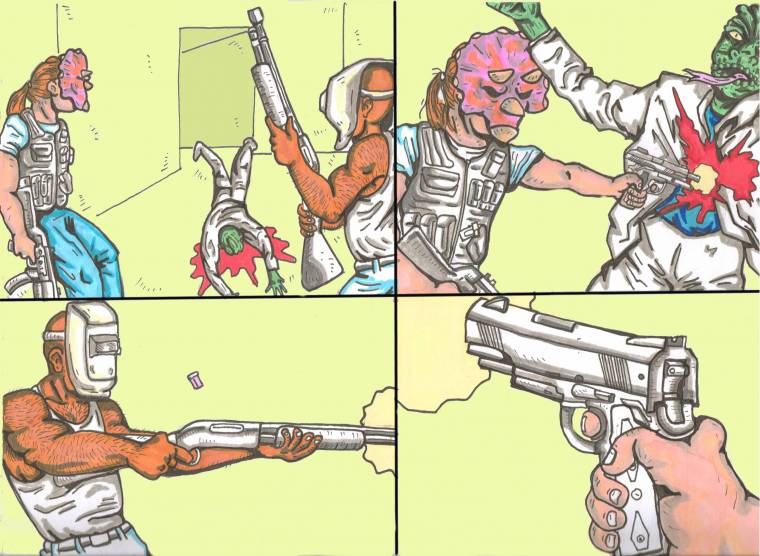 We all get what we deserve in the end.
Pump, Pump, Boom! 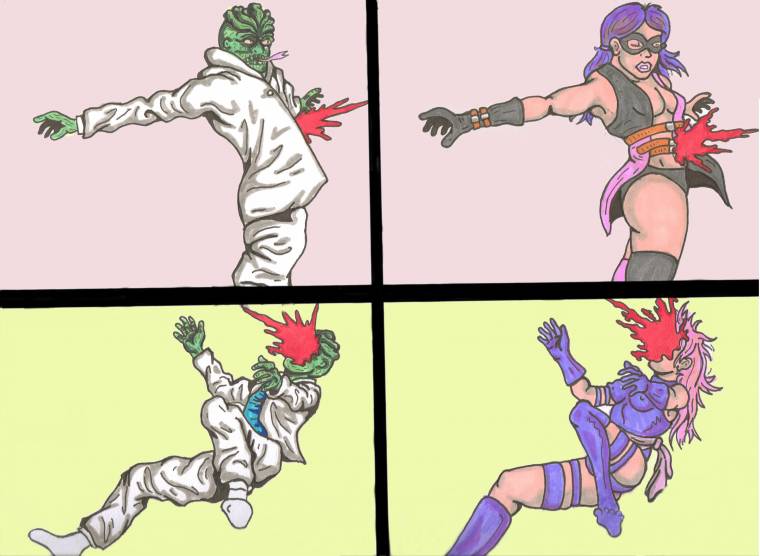 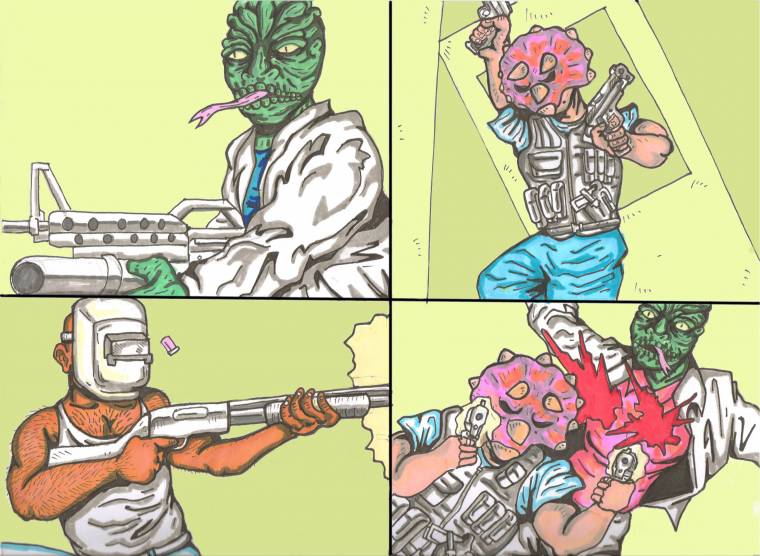 Art shouldn't be safe. Art should be dangerous. It should be alive and unpredictable. It should have its own consequences.
Pump, pump boom!
All of our lives are defined and shaped by the almighty story.
Pump, Pump Boom!
I am changing. I'm transforming. I'm becoming.
Pump, Pump, Boom!
Look at me now! 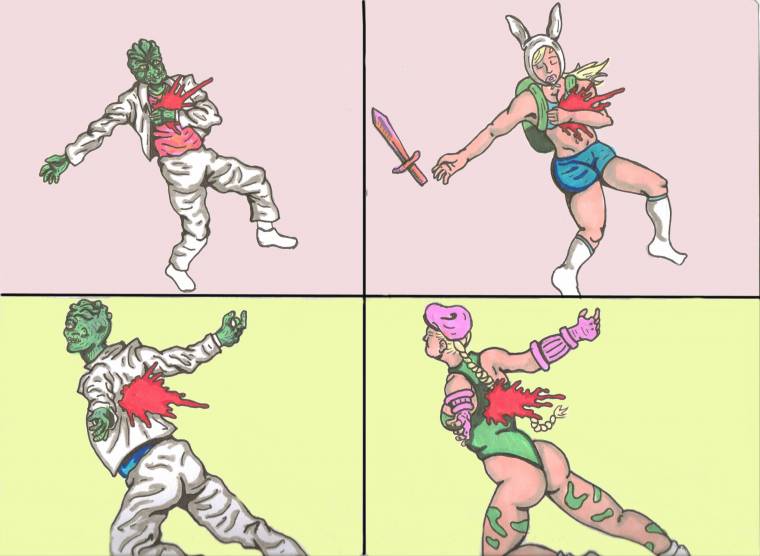 All of the screaming and gurgling death rattles join the chain-link blasts of machine gun fire and the room-shaking stomps of the shotgun, it all swirls together with the blaring shrieks of the fire alarm and the wails of the approaching sirens, it's all building up to a crescendo, reaching an orgasmic peak before settling down into the denouement.
I lose track of time.

Just how long has this been going on?

How many rounds have I fired off?

How many Reptilians have I killed?

It's not until I've gone through my satchel previously filled with hundreds of shotgun rounds and emptied out ten or fifteen magazines of .45 ammo that I realize that there's nothing left to shoot.

The entire Convention Hall floor is littered with bodies.

The air is rife with the stench of cordite.

Although, scratch that statement. I'm wrong. Nearly every modern novelist and screenwriter still gets that wrong, somehow. It sounds true and it sounds cool but munitions manufacturers have stopped using cordite in gun powder mixtures since the end of WW II.

Every time you've seen some generic police investigative procedural show on television and the detective talks about the smell of cordite on a suspect's clothing or hands after a shooting, that television show is embarrassingly wrong.

That is, unless you've been firing off thousands of rounds in a confined space.

What I smell is the acrid combination of carbon, sulfur, and numerous nitrates.

I look over to my right and see Scott. He's just kind of standing there with a stoic pose as if in deep contemplation. He looks like a super hero in one of those character one sheets advertising next summer's new dark and gritty comic book film.

When he finally turns to face me, I can see that he's wearing that big wide smile of his, that same stupid smile he had when I met him at the airport holding room three days ago in Philadelphia.

He drops his MP5 to the ground and upholsters a pistol from his hip. He's still smiling at me as he presses the barrel up against the side of his head. I can't help but think of the dream sequence from Takeshi Kitano's Sonatine.

With unwavering enthusiasm, Scott calls out to me, "Don't worry, Greg! Everything is going to be OK!"

And then Scott pulls the trigger and blows his own brains out. His corpse collapses to the ground with that big stupid smile still plastered to its face.

The sirens are getting closer. The end is nigh; I have nowhere to go.

My trembling hands finally give out and I lose my grip on the shotgun. It seems odd that it doesn't make a sound when it hits the floor.

I wonder if I can finally end this terrible nightmare if I follow Scott's lead. I hope to wake up warm and safe in a bed somewhere if I turn the revolver still resting in my shoulder rig on myself. And just as I get the large hand cannon out of the leather sheath, I'm taken off-guard by one last remaining reptilian.

I don't know where he could've come from and how get got so close to me without making any noise, but I've turned around to find a Smith and Wesson M&P 9mm handgun shoved against my welder's helmet.

I'm shocked at the speed of my own reflexes; it's amazing what the body is capable of doing of its own accord in the name of self-preservation and survival. Without even realizing it, I already have my own Smith and Wesson 29 44 magnum lined square with the center of the Reptilian's temple.

It's just like the big final standoff in some tacky action movie. It's just like a splash page panel in some comic book. This is every silly prepubescent male's fantasy.

I look directly into the Reptilian's eyes. I see past them. I see the future, his future, my future, our future.

There is no future. 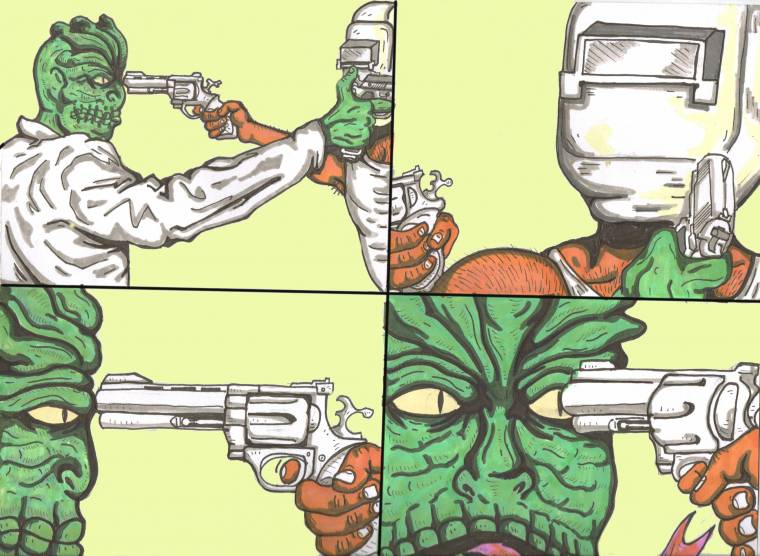 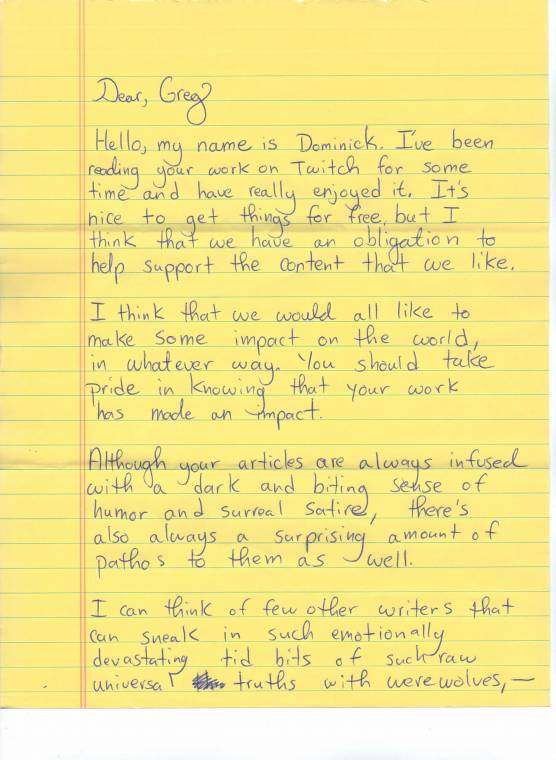 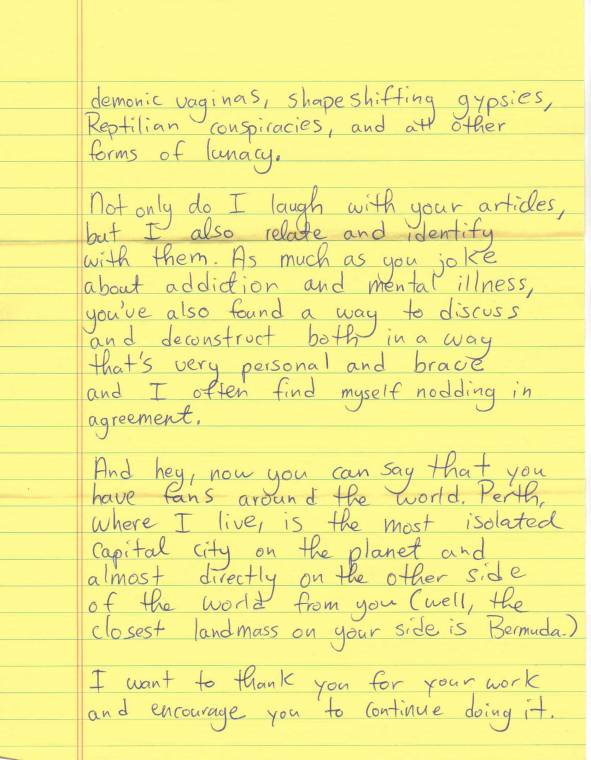 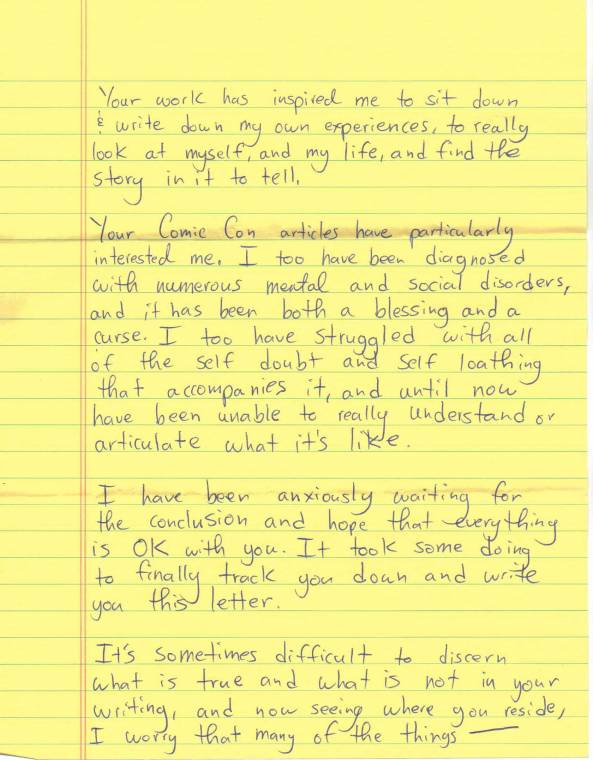 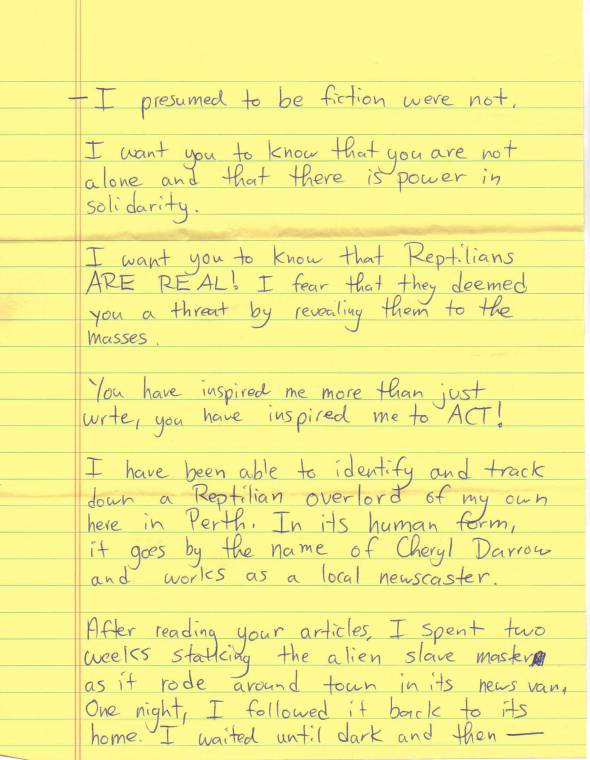 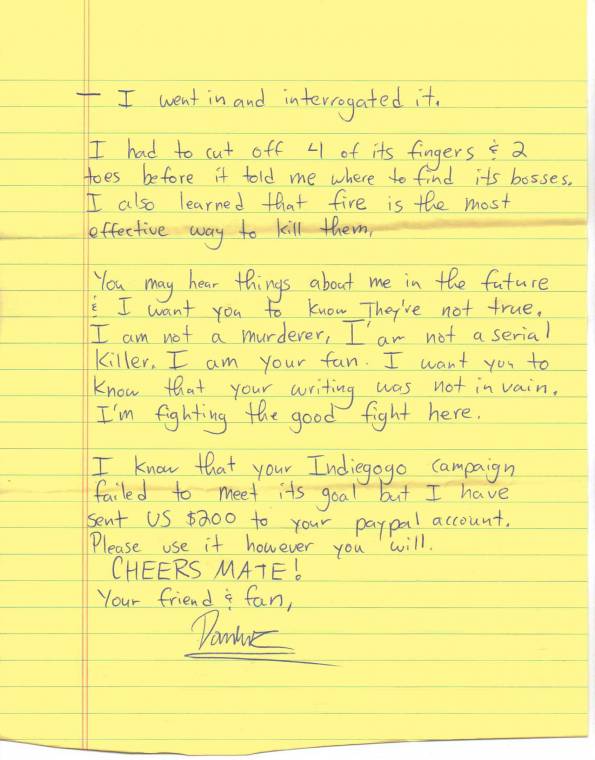 More about Fear and Loathing in Comic-Con