Fantastic Fest 2014 Review: I AM HERE Explores What Happens When A Biological Clock Pops A Spring 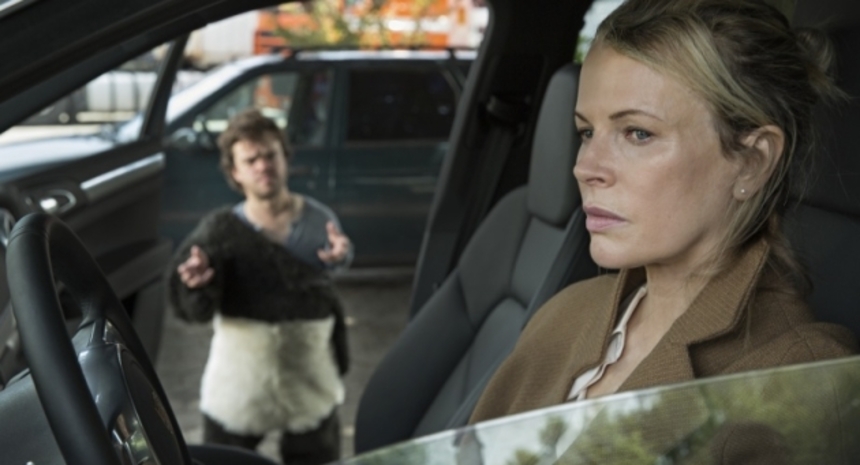 The concept of the early middle aged woman's biological clock is well established. It's expected that as childless women reach a certain age their body will begin to tell them that it is time. Now, obviously this is a gross generality, but in my own personal experience, it's a cliche because there is more than a grain of truth to it. Many men and women my age, that is to say early to mid thirties, begin to notice many of their female peers turning from footloose and fancy-free DINC's (double income no children) or singles, to frothing-at-the-mouth rabid baby-coveters. Director Anders Morgenthaler explores the illogical extreme of this archetype in I Am Here, a sort of biological thriller in which Kim Basinger's Maria takes her fertility into her own hands.

Maria is a powerful woman. While we don't get a clear picture of her position, she's obviously the one calling the shots at some kind of massive import/export company in Denmark. She is obviously very used to getting what she wants, except for one small thing. Maria wants a baby. After ten years of trying with her husband, Peter, her final failure pushes her over the edge into all-encompassing despair. When Peter leaves, unable to cope with his wife's inability to accept her own biological limits, Maria loses her mind and, with only the slightest push from an NGO working to change shipping routes in the name of curtailing sex-trafficking in port cities, she hatches a plan to become a Mommy.

You see, these port cities and their illicit sex trades have spawned a black market for the babies of prostitutes. The working girls can't take care of them, and the pimps and madams have no interest in paying for them, so what better way to alleviate their burdens than to sell them off. Maria, being of fractured mind, decides that the best way to acquire a baby is to purchase one off of the black market. In her own mind she is killing two brids with one stone, she rescues a baby from some unknown, but surely despicable, fate, and of course, she gets her baby. Everybody wins, right?

Along the way Maria picks up a wandering circus dwarf named Christian, or Petit as he is professionally known, and she offers him €10,000 to put her in touch with the black market where she can make her transaction. What could possibly go wrong? Well, since you asked, everything. Despite the protestations of Christian, who ends up becoming the moral center and conscience of the film in spite of his insatiable desire for money, Maria plows through the seediest ports of call in Nothern Europe in search of a child of her own, in spite of teh fact that she is ruining lives along the way, not the least of which is her own.

What makes I Am Here such a perplexing and morally complex film is the degree to which we are able to identify and empathize with Maria's actions. The concept of the barren woman stealing babies is nothing new. Every few months we are subjected to a gruesome story on the news somewhere of a woman driven insane by her own hormonal urges who murders a pregnant women in order to steal her unborn child. One of the greatest horror films of the last decade, Alexandre Bustillo and Julien Mary's Inside, is based on this very concept, and the execution (no pun intended) is one of cinema's most harrowing and visceral experiences. Maria, on the other hand, intends to hurt no one, and therein lays the moral conundrum..

I Am Here could have been a simple story of a woman going crazy when she couldn't have a baby. While that could serve as an accurate byline as well as anything else I can come up with, Morgenthaler's motivations are far less black and white, and his protagonist less of a villain than a victim of her own expectations. A woman for whom failure, particularly failure in the one thing that she believes will make her whole, is unacceptable, and in her mind, fixable. Through all of the insanity, she believes that she is doing the right thing for everyone involved, when in reality, it is only herself that she's concerned with.

Basinger is incredibly adept at portraying this woman who has reached the age at which motherhood stops being risky and becomes impossible. She's clearly aware of her limitations and uses them as fuel for the fire. Her angst is ours, and even though she clearly makes the wrong decisions at every turn, I couldn't help but cheer her on just a little, as long as she doesn't hurt anyone that doesn't deserve it. When she finally does get a child, in a fashion that I'll leave as a mystery, she seems immediately overwhelmed, as every new parent is, and when the situation becomes further complicated, her manufactured instincts begin to fail her. To reveal more would spoil more than a little bit of the adventure, but I Am Here is well worth seeking out.

Morgenthaler does more than simply craft a compelling narrative, he uses his camera and the environment to complement the goings-on in Maria's increasingly unstable world. His use of the natural world to facilitate and/or impede Maria's haywire biology is inspired and she grows a deeper bond with the Earth as the film wears on. This attention to detail and bringing together of disparate elements in what is essentially a biological thriller is confident storytelling at its finest. I Am Here may not be my favorite film of the year, but it's certainly given me more to think about than most, and that's a wonderful thing.

Do you feel this content is inappropriate or infringes upon your rights? Click here to report it, or see our DMCA policy.
Fantastic Fest 2014i am hereKim Basinger