Destroy All Monsters: GOTHAM And The Cult Of "Before" 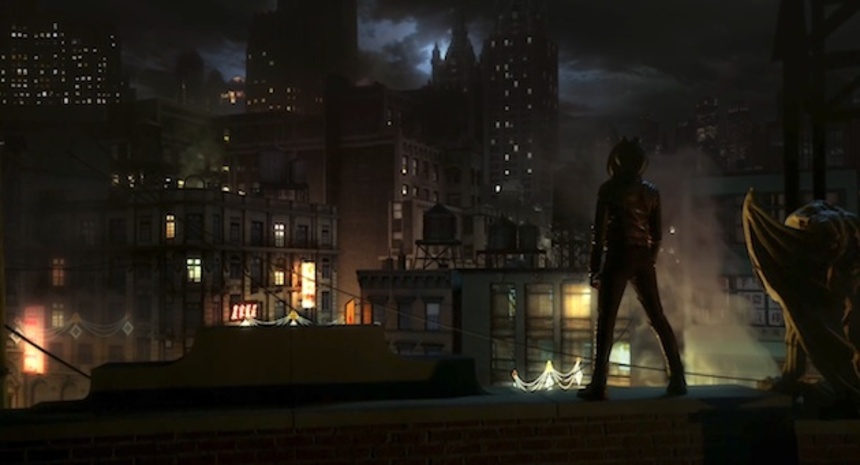 "Before there was Batman, there was Gotham," the posters for Fox's new series bark. This is a molecular deconstruction of the Batman mythos taken at its most mundane. Coming up: an origin story for the Batarang (its horrible secrets laid bare!), followed by Alfred Pennyworth In The Army: The Movie.

The cult of prequelology that has sprung up in the 15 years since The Phantom Menace has somehow failed, in all this time, to locate a single compelling reason why prequels should exist at all, besides the obvious, market-driven ones. Connecting a property to a preexisting property, in whatever chronological direction, makes good money.

But otherwise: what the hell are they there for? I'm fonder of the Star Wars episodes I-III than most, and the Hobbit films besides, but I'd be a fool not to understand why pretty much everyone else hates the bloody things. What prequel, ever, worked? What story was ever enriched by knowing how all the characters you already know about, got to the point where you know about them?

The exception that proves the rule, ironically, is Batman Begins (in movies anyway; yes, Batman: Year One was also very good). Batman Begins used its "prequel" status as a shield against the execrable sense-memory of Batman & Robin and Batman Forever before ATVing off in its own new direction. Nolan's films went on to tell the entire story of Batman, from Beginsing to Risetirement, as though the "original" Batman movies had never happened. Because, of course, they hadn't; and Batman Begins was a prequel to nothing at all, besides its own sequels.

The premiere episode of Gotham, the new crime series set in the eponymous city circa the death of Bruce and Martha Wayne, nicely outlines the core emptiness of the prequel concept, and the Pavlovian audience response that continues to support their creation.

What I presume to be the premise proper for the series - young James Gordon (not yet Commissioner) solving crimes in the increasingly-crime-ridden Gotham City - was about as dramatically involving as a documentary about the colour taupe.

And yet, every "wink" - the audience-baiting candy that prequels are, as far as I can tell, created to supply - perked up my ears like a Doberman's. Holy shit, that tween Catwoman is stealing milk to feed her cats! The criminologist at the Gotham PD delivers his reports in riddles!! Kid Batman is standing on the edge of rooftops to teach himself not to be afraid!!! Squee and epic squee!

"Winks" are the point of prequels. They're why we have Jango Fett standing in for Boba Fett, and why Puffy Legolas is in The Desolation of Smaug, and why a slimy xenomorph pops out of the Engineer at the end of Prometheus. They're the way the filmmakers circle-jerk the existing fanbase within the frame of the "new" content.

More to the point, they're the new content's insurance policy against the fact that their narratives do not, and cannot, work.

Returning to Gotham, the pilot episode candidly demonstrates the degree to which there's no "there" there. In the existing canon of the Batman stories there are a dozen years or more between the death of Bruce's parents and his emergence as a functional vigilante; but the Gotham pilot must immediately move pre-pubescent Bruce at least halfway to his end point because if it doesn't, we're going to spend at least a couple full seasons with a thoroughly traumatized, nearly speechless child.

Consider the structural premise of Gotham City itself. Depending on your stance on Batman lore, Gotham is either at its nadir of criminal dominance when the Waynes get killed (i.e. now), or at the time Batman emerges to fight back. In either scenario, though, the glut of supervillains that would come to challenge Batman - "escalation," as Gordon describes it at the end of Batman Begins - are a response to a systemic void that Batman himself creates, when he smashes the city's organized crime ring.

But again, for the show to work, it must presuppose that Gotham City was full to bursting with a train of amiable losers with severe personality ticks who are one personal disaster (to be named later) from turning into the Penguin, the Riddler, and the Joker.

I'd buy that prequel, ironically. But I may be splitting (cat) hairs. It's been outlined before, yet bears repeating: the problem with any prequel story is that it is, by definition, not the story.

It's the backstory, and when George Lucas developed his Star Wars movies and stuck that ignominious "Episode IV" in front of that equally ignominious "A New Hope" when he re-released Star Wars in 1979, he wasn't just soldering a new step onto his ladder to franchise wealth by which the entire Hollywood enterprise would be defined for the next 30 years; he was, rather gracelessly, implying that backstory had relevance and weight equal to that of story, itself.

But it doesn't, and it can't, because backstory isn't a narrative in and of itself; or at least, it isn't the right narrative. It's the road towards the narrative, towards the crucial moments; no writer ever took the most significant portion of a story's life and tossed it into the preamble for the other story they then went on to tell. Writers, and storytellers generally, have an unerring skill at locating the actual part of the narrative that needs telling, and telling it - because it tends to be the most interesting part, the part you'd be nuts not to tell.

Sure, flash back to it (every episode of LOST), cut to it in parallel (The Godfather, Part II), even land on it at the tail end of your crucial narrative to underline your thematic conclusion (...well, the best example is Godfather II again). But don't ever call the prequel its own story.

As if in admission of its own narrative defeat, the Gotham premiere is laced with candy to distract the audience's eye away from the defects. Would the experience have been branded enough if the series had just been about two male cops - one's a rookie, one's a vet - working a murder case that involved the criminal underworld? Nope, so let's have a little girl dressed in green whose name is Ivy; or an opening preamble where teen Selina prowls around rooftops like the cat woman she will someday blossom into; and one of the most significant Primal Scenes in the history of popular culture reformatted as the inciting incident of a procedural detective series.

The audience claps, and squees, and connects the fragments in front of them to the greater, richer myths to come, and thinks they've seen something, when all they've seen is regurgitated strands that were left out of the original map for a good reason: they weren't the interesting part. They were the stuff that came before.