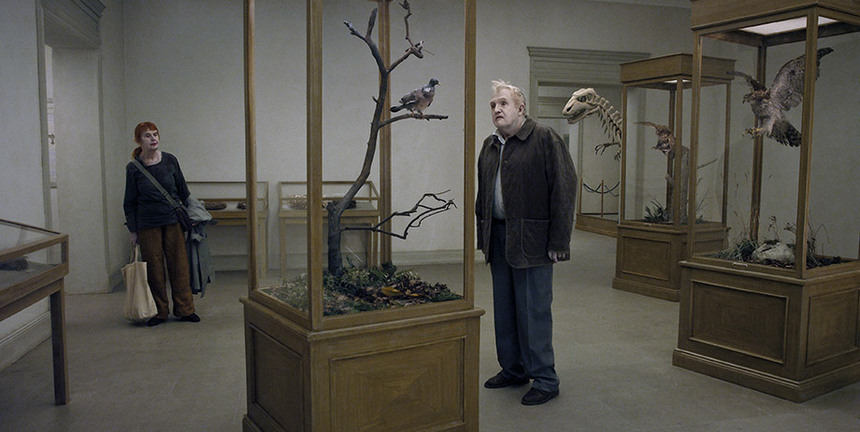 Confession time: I have never seen a film by Roy Andersson. And clearly this needs to change because if his work is anything at all like the drily hysterical trailer for his Venice and Toronto selection A Pigeon Sat On A Branch Reflecting On Existence then they were absolutely made for me. Here's how Toronto describes it:

A mixture of absurdist, hilariously deadpan humour, shock, and utter horror. A Pigeon Sat on a Branch Reflecting on Existence presents a series of darkly comic vignettes organized around two narrative strands. In one, two hapless novelty salesmen wander around town trying to sell their inventory of vampire fangs and rubber masks, all the while bickering like an old married couple; in the other, Charles XII, Sweden's most bellicose king, reappears in modern times to carry on his series of disastrous defeats. Shifting between nightmare, fantasy, reverie, and even an impromptu musical number, the film culminates with a blistering indictment of what Andersson presents as humanity's stunning lack of empathy.

The trailer - English subtitles included - lies below. All I can say is, yes, I'll take the beer, too.

Do you feel this content is inappropriate or infringes upon your rights? Click here to report it, or see our DMCA policy.
a pigeon sat on a branch reflecting on existenceComedyRoy Anderssonswedentoronto film festivaltrailervenice 2014Holger AnderssonNils WestblomCharlotta LarssonViktor GyllenbergDrama

More about A Pigeon Sat On A Branch Reflecting On Existence