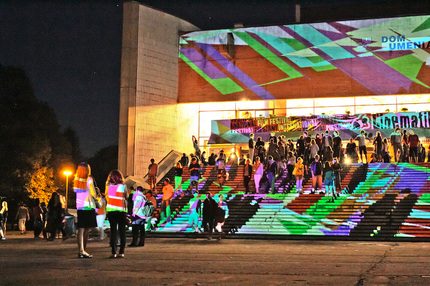 The 9th edition of the Slovak film festival, Cinematik will kick off September 10 in the well-known spa town of Piešťany, with The Giver, the adaption of Louis Lowry´s book, produced by and starring Jeff Bridges in the title role. Despite the festival´s relatively young age, Cinematik has been growing very fast from year to year, while retaining its informal atmosphere. The ever expanding programming focuses primary on European and Slovak cinema, although films from other corners of the world are not being omitted.
The international competition, Meeting Point Europe, boasts European titles picked by film critics from 17 European countries. Among contending films are the critically acclaimed festival hit Stranger by the Lake, the Icelandic Of Horses and Men, an entertaining and subtle debut by Benedikt Erlingsson noted for its immersive cinematography. Then we have the fourth feature by one of the youngest and most prolific directors around, Xavier Dolan's Tom at the Farm, where he also starts in the main role. The 86th Academy winner for best foreign language film, Paolo Sorrentino´s The Great Beauty is also in competition, along with provocative yet comical drama Borgman, John Michael McDonagh's darkly amusing second feature starring Brendan Gleeson, Calvary, the giallo homage The Strange Colour of Your Body´s Tears, Alpine western The Dark Valley, and the freshest film by the director of Kafkaesque mind trip The Temptation of St.Tony, Veiko Ounpuu's Free Range.
The Cinematik documentary competition features Slovak documentary films with The First Slovak Horror, which humorously tracks the pitfalls of making a genre film on home turf as the production of the first Slovak horror crashes down, Miro Remo´s new documentary Comeback following two recidivists into the life outside the bars and their struggle to integrate into society, and All My Children, a portrait of a priest helping ex-convicts, drug addicts and homeless. Besides the Slovak premiere of Comeback, the awaited first fiction feature of Slovak documentarist Jaro Vojtek, Children, will also start its theatrical run at Cinematik. IN Voktek's film the relationship between parents and children is scrutinized through four stories: a father coming to terms with his inaccessible autistic son, a homesick young man, a boy living with insensitive step-father and a woman taking care of her dying father.
The programmers did not omit cult films as one night will be dedicated to the Mad Max trilogy as a part of the cult section's focus on cars in cinema. Besides Gibson wreaking havoc in a dystopian wasteland, we ahve Ron Howard´s Rush (titled here as Rivals), a Lauda and Hunt formula-one racing biopic, and Juraj Herz's blood-fuelled Ferat Vampire. Cinematik is also building its reputation on ever tempting retrospectives. After Leox Carax and Ben Wheatley, the section Respect will be dedicated to the creative duo Benoît Delépine and Gustave Kervern. Their wild and darkly humorous films Aaltra, Avida, Louise-Michel, Mammuth and Le Gran Soir have been chosen to showcase their talent and skills.
Cinematik will also feature widely praised pieces such as Dabid Cronenberg´s tinsel town satire Maps to the Stars, Phillipe Garrel´s latest Cinema Povera endeavour Jealousy, Richard Linklater´s Boyhood, Godard´s cinematic essay Goodbye to Language 3D, plus the pinnacle of Anderson-esque poetics in The Grandhotel Budapest, as well as David Robert Mitchell´s word-of-mouth Cannes smash It Follows.
International Film Festival Cinematik, September 10 til September 15, Piešťany, Slovakia. Click here for more information.
Tweet Post Submit

Do you feel this content is inappropriate or infringes upon your rights? Click here to report it, or see our DMCA policy.
BorgmanCalvaryCinematikFree RangeJealousyMaps to the StarsSlovakia