Review: WHAT IF Pretends To Be A Modern, Hip Romantic Comedy 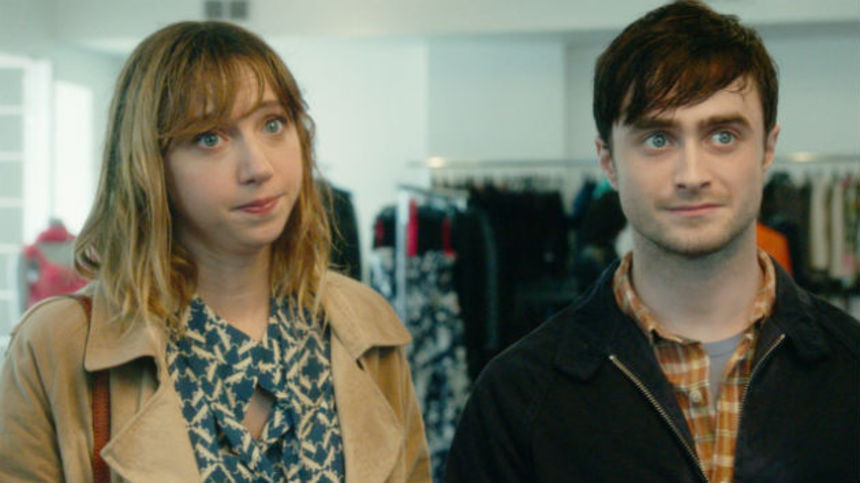 Romantic comedies that discredit the integrity of a main character lose me entirely.

Near the beginning of the new romantic comedy What If (titled The F Word in other territories), directed by Michael Dowse (Goon), the character played by Daniel Radcliffe makes it clear that he hates cheating. His parents set a bad example for him, cheating early and often in their relationship before calling it quits when he was in his early teens. (Then, evidently, they both died, because they're never seen or heard from again.) Therefore, he detests that sort of thing, and it's the reason he broke up with his last girlfriend a year before the movie begins.

But then Wallace (aka Radcliffe) meets the charming Chantry (Zoe Kazan) and instantly sparks with her. When she invites his friendship, he instantly accepts, even though she's been in a committed, loving relationship with her live-in boyfriend Ben (Rafe Spall) for five years, and he has been single for a very long year. Naturally, Wallace is fooling himself. He resists going out with other women, and when another attractive young lady offers herself to him on a platter (actually, the front seat of her automobile), he sputters and resists her kisses.

Yes, Wallace is surprised to find that he has fallen in love with his new friend Chantry. Of course, as noted, he hasn't put himself on the dating market, and he spends an inordinate amount of time with her alone, walking in the rain and accompanying her as she goes shopping, so his attraction to her really shouldn't be a surprise to him, but the movie's definition of "modern" is that young people are in a constant state of self-denial and believe they can be platonic friends with a member of the opposite sex. Ho ho ho, how wrong you are, young people! .

How, after all, could Wallace possibly resist falling for her spunky charm, especially since they have a similar sense of humor and laugh at the same things and joke disdainfully about the same things? Ha ha ha: cynicism is cool, am I right? Jeez, they're even about the same age and height, and Chantry's boyfriend appears to be dull and plodding. It's a perfect set-up! 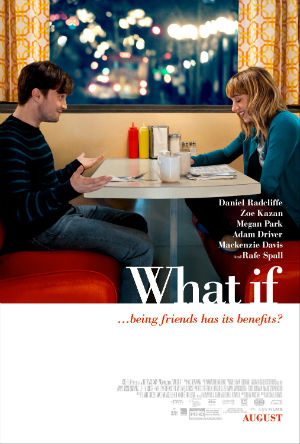 In my rich fantasy life, the characters in modern romantic comedies display a tiny shred of personal integrity, and the creative personalities responsible resist the temptation of following the exhausted pattern of 'joke, joke, joke, oh, gotta be serious now, joke.' What If is based on Toothpaste and Cigars, a stage play by T.J. Dawe and Michael Rinaldi, and written for the screen by Elan Mastai, and evidently everyone involved in this adaptation felt good about the characters and the adaptation, even though it follows age-old patterns of deceit and deception as aphrodisiacs for True Love. .

Radcliffe and Kazan make for an appealing couple, and each contributes a convincing amount of emotional energy to their performances. The one-liners that they exchange are cute and snappy, and they look adorable together on screen. Megan Park (as Chantry's sister), Adam Driver (as Wallace's only friend), Mackenzie Davis (as the girlfriend of Wallace's only friend), and the other cast members are as sassy as needed. Rogier Stoffers' cinematography takes full advantage of many locations in Toronto, which lends the movie a friendly, authentic vibe.

Yet there's the rub: All this talent involved, and everyone was fine (evidently) with sacrificing a character's integrity on the altar of a romantic comedy contrivance. And then laughing about it. Go figure.

Note: Jason Gorber reviewed the film for Twitch under its original title when it played at the Toronto International Film Festival in September 2013. His review is much more positive than mine. To quote one paragraph:

"It's to Michael Dowse's credit that The F Word manages to feel so damn fresh, despite the fact that it's clearly joining a very long line of similar films. A lot of that can be attributed to a highly self-aware, yet never mawkish or overtly ironic script. Toying with the complexities of romantic love, where remaining "just friends" (the "F" word in question) can sometimes be an impossible task, the story feels part documentary, part fable. This balance between what feels real and what feels narratively satisfying is a hard one to make, and the film does an excellent job at threading this needle."

He concluded: "With overt references to the likes of The Princess Bride, whipsnap dialogue and compelling, memorable performances, The F Word transcends its formulaic pretenses, resulting in a charming, quite effective film."

What If opens in limited theatrical release throughout the U.S. on Friday, August 8.

Do you feel this content is inappropriate or infringes upon your rights? Click here to report it, or see our DMCA policy.
Adam DriverDaniel RadcliffeMichael DowseZoe Kazan

More about the f word