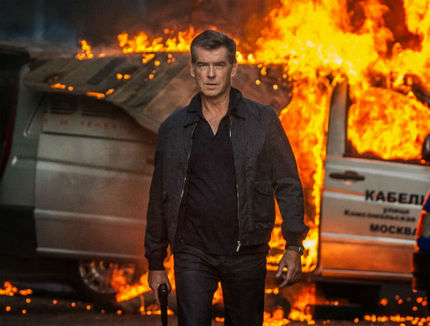 There are only two months separating August and November, yet they couldn't be more different. August is a final bastion of heat, transitional as summer break ends and school begins. November, by contrast, is chilled fall giving way to winter weathers, a month set well in its routines.
For movies, November is also when the annual film awards season ramps up, delivering a glut of prestige films vying for acclaim and golden statues. The November Man, the latest spy adventure to feature four-time 007 Pierce Brosnan as a licensed agent with a cold resolve, is, despite its titular month, no such effort.
In terms of crowd-pleasing aesthetics blending cat-and-mouse internal affairs intrigue, The November Man resides somewhere between the favored Jason Bourne series and the long-in-the-tooth Tom Clancy adaptations. Brosnan stars as former CIA hotshot Peter Devereaux, who finds himself back in the thick of international tensions when things take a turn for the personal. Stakes both global and internal -- something for every nail-biter!
The film is credited as being an adaptation of "There Are No Spies," the seventh novel in a series that began with a different book that bore the title "The November Man." By Hollywood logic, book seven is obviously as good a place to start as any! By the time the character of Devereaux would arrive at the seventh such tale, it's understandable that he'd bear some commonality with the cold, staid, yet not-quite-the-end-the-year month of November. But this being the start of an intended franchise -- a sequel has already been announced -- it plays more like a covert summer distraction. 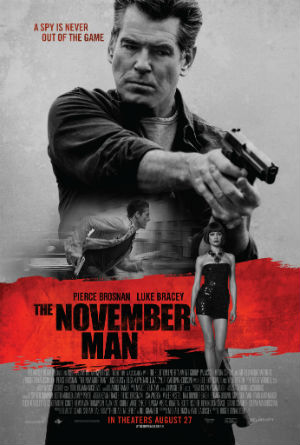 Although the film begins with the death of an innocent 10-year-old bystander, this sobering consequence comes only after the standard action of gun play and tense music. So yes, The November Man, with its audience age-restricting brutality and an edginess that Brosnan's James Bond could never have, clearly wants to be perceived as a "real world" possibility, something that "pulls no punches." Yet, The November Man is still very much a movie-movie, replete with familiar action tropes -- either "time-tested" or "worn out", depending on whom you talk to -- right down to the squealy-tire car chases and characters walking away from huge explosions 12 feet behind them.
And let's not forget director Roger Donaldson's male leer, a hybrid of that of Brian De Palma, without the subtext, and Michael Bay, without the giant robots. Female extras favor short skirts and low cut tops, the camera favoring low rear angles on the former. When it comes time for the film's purse-clutching every-woman, played by Olga Kurylenko, to take the initiative, she does so in the shortest, lowest, leggiest, sequined tube skirt imaginable. And Donaldson, the man responsible for the misogynist Species (1995) and the ridiculously oversexed The Getaway (1994) can imagine a lot. Before that, she's made to visit a strip club twice, because you know, that's where the necessary people gather...!
So, don't be fooled. Despite its November-friendly literary adaptation roots and CIA procedural "authenticity" -- lots of talk of rules, lots of intense scenes in government offices and top secret holding facilities -- this film belongs in August. Late August. It's watchable, while also being completely disposable, the kind of movie that would play half-watched on a hotel room TV while the occupant made love, polished his weapon, or combed the internet. In The November Man, we survey the characters doing all of the above.
If they gave out awards for "Most So-So Hard Edged Late Summer Spy Thriller," this movie would be in the running. But, unfortunately for Donaldson and company, they don't give out awards in August. Awards season starts in November, man.
The film opens in theaters across North America on Wednesday, August 27. Visit the official site for more information.

More about The November Man