Review: KUNDO: AGE OF THE RAMPANT Marches With A Confident Swagger 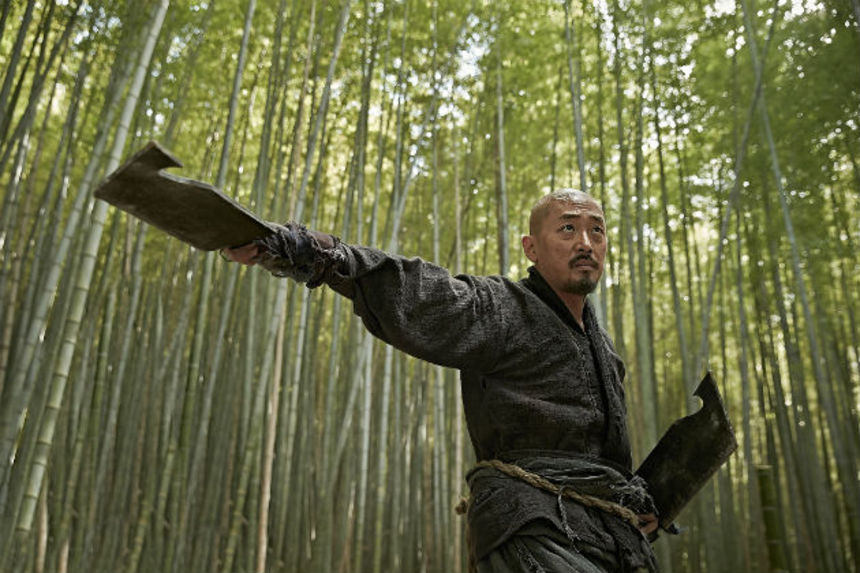 With big stars and a hefty budget, Kundo: Age Of The Rampant marches into theaters with confidence and tongue planted firmly in cheek. This hybrid period film owes more to spaghetti westerns than the history of its Joseon Era setting and some may take umbrage at the film's excessive running time, but with a raucous charm and an array of well-mined genre tropes, it's sure to keep most spectators satisfied.

A group of Robin Hood-like bandits called Kundo roam the land, taking from the corrupt rich and giving back to the embattled poor. Dol Moo-chi, a lowly butcher, finds himself embroiled in an assassination plot hatched by the young prince Jo Yoon, what wants to put himself next in line for the throne. When he backs down from committing the deed he is sentenced to death and in the nick of time, Kundo come to his rescue, subsequently recruiting him within their ranks. Together they try to bring a stop to the cruel Jo Yoon, who also happens to be a formidable swordsman.

Much like some past Korean blockbusters like Haeundae (2009), Kundo concerns itself a great deal with world building. The film looks terrific and allows us plenty of time to get to know its ensemble cast. The consequence of this is that it takes a while for things to really kick off. After almost a full hour of set up the action finally begins to ramp up but the pacing does still suffer from the odd expository flashback.

While most period films in Korea are King's court dramas with limited global appeal, Kundo hopes to cast a wide net by drawing equally from western influences as it does from Korean history. With its galloping band of outlaws and a strong waft of Ennio Morricone emanating from its score, the film makes no attempt to hide its influences. Furthermore, one sequence, featuring an attack on a village, feels more than a little indebted to Seven Samurai (1954). Comparisons with the Kurosawa classic, itself a blueprint for many subsequent westerns, don't stop there as the blunt Dol Moo-chi, with a humorous and brutish physicality, is essentially a reincarnation of Mifune Toshiro's character from that film.

Debuting with the low-key but poignant military service indie drama The Unforgiven (2005), director Yoon Jong-bin has come a long way in the last decade, finding himself holding the reigns of this summer's biggest Korean film. The young director (he's still only 34) has steadily turned himself from an indie auteur into a tentpole director with punchy, well-made films injected with a heady dose of retro cool. Big sunglasses, smoky red lounges and earth-toned suits marked his last film, the wildly successful period gang pic Nameless Gangster (2012). With Kundo he's gone even further, tossing out a contemporaneous feel for anachronistic but infectious western stylings and the type 1960s Japanese pop cool that Suzuki Seijun was known for. Of course, he wouldn't be able to do any of it without his partner in crime, the ever-magnetic Ha Jung-woo, who has been one of the lead actors in all of his films to-date. 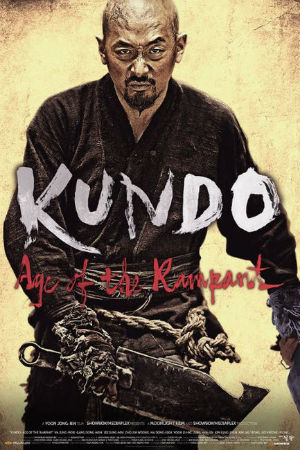 Fresh off a big 2013, with two major hits (The Berlin File, The Terror Live) and his directorial debut (Fasten Your Seatbelt), Ha brings his effortless cool and comic talents to the role of Dol Moo-chi. He has a lot of fun with the character and ably wrings out some big laughs with his coarse manners, but it also feels like he's trying a bit too hard. He hams up his gestures and expressions where he could have let his natural charisma do the work for him.

Returning to the big screen for the first time since Haunters (2010), due to his 21-month obligatory military service, is Gang Dong-won, as the evil, lithe and vaguely effeminate Jo Yoon. It's familiar territory for the star and the film seems to be playing off this fact, echoing the similar longhaired swordsman he played in Duelist (2005). The chief assets to Gang's performance are his deep, mournful eyes which serve two functions: they intensify Jo Yoon's aggression when he commits cruel acts and make him sympathetic in his weaker moments.

Kundo's supporting cast is a veritable who's who of Korean cinema and while all the roles are more or less stock characters, they are effectively brought to life by veterans such as Lee Kyoung-young, Lee Sung-min, Ma Dong-seok and Cho Jin-woong. A handful of women also appear in the film, but, for better or worse, this is definitely a man's playground.

Period blockbusters are all the rage in Korean cinema at the moment and the stakes have been raised this summer as King's court dramas are being replaced by swashbuckling adventures (The Pirates) and historical naval battles (Roaring Currents). However, first up to bat is the comedy-action western Kundo: Age Of The Rampant. With ambitious scale and a variety of styles thrown in to draw the biggest possible crowd, Kundo almost threatens to buckle under its own weight. But with technical zeal and infectious charisma, it just about manages to bind its many elements together

Review originally published during the film's theatrical release in South Korea in July. The film opens in select theaters in the U.S. on Friday, August 29. Visit the official U.S. site for more information.

Kundo: Age of the Rampant