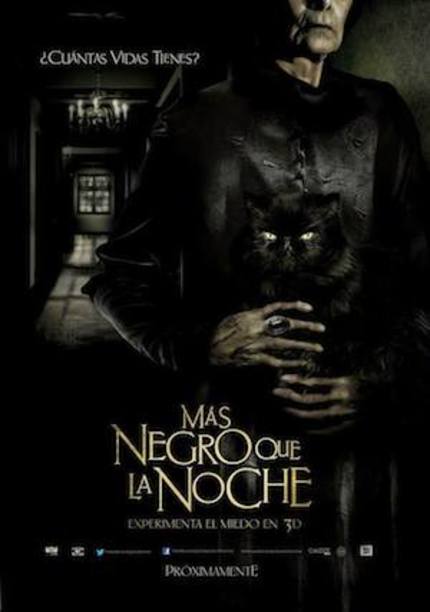 The original Más Negro Que la Noche, or Darker Than Night, was written and directed by the late Carlos Enrique Taboada in 1975.

Widely considered as one of the most important Mexican horror films ever made, it is everything this new 3D remake is not: simple yet effective, atmospheric, coherent, memorable, and serious. Sure, we all can have fun as the characters say the title more than once, but nonetheless, Taboada's film is a solemn take of a classic ghost/haunted house story. Cut to 2014, and we've got not only the characters repeating the title "Más Negro Que la Noche", but also a complete fest of ridiculous material that, needless to say, will piss off those who respect the 1975 version.

Respecting the original premise, Henry Bedwell's Darker Than Night puts a group of four young girlfriends inside the old-fashioned house that one of them just inherited from her deceased aunt Ofelia. The old housekeeper Evangelina (Margarita Sanz) and the aunt's beloved black cat Becker remain in the residence, as the girls move into it. Of course, the place has a sinister atmosphere, and the protagonist Greta (Zuria Vega) soon starts to be tormented by nightmares and just the feel of being there.

The chicks from the original acted in some ways just as the new ensemble. Bedwell maintains the essence of having young, fun and skeptical girls, yet his performers aren't nearly as charismatic as the former cast. Actresses Zuria Vega, Adriana Louvier, Eréndira Ibarra, and Ona Casamiquela lack personality and, plain and simple, skills; in consequence, these characters are basically generic and you just don't care for them.

Sanz - as the housekeeper - offers, by far, the most decent acting in the whole film. This character is closest to Taboada than anything else; she's a constant creepy presence that certainly indicates something else might be going on in the house. However, it feels like she is from a completely different world. In a way, that's the point, as there's a natural age-related contrast between this old character and the group of young gals. There's also, however, a feeling that she comes from a good, atmospheric horror piece, only to be made fun of.

I mean, there are literally jokes on that; for example, we see one of the girls saying things like, "Why are you always trying to scare us, Evengelina?" It sort of plays like a parody of the original and makes for some risible moments. Also, several situations are pure unintentional humor, as well as some of the dialog. Inside the house, there's one sequence of a party, in which Greta's angry boyfriend throws a glass of water at the big, iconic portrait of Aunt Ofelia (an object straight from Taboada's vision). As a whole, the Darker Than Night remake is as if Bedwell was the one throwing - disrespectfully - the glass to a painting of Taboada.

Darker Than Night becomes also a mess as it tries to stick to the key plot moments of the first film, while also adding its own mythology. The "darker than night" black cat Becker is, undoubtedly, the centerpiece of the story, beginning with the aunt's condition that the new house owner (her nephew) must take good care of the animal. That's still the same in this version; however, there's a whole new background story that ultimately makes Becker kind of unimportant. Purists probably won't tolerate this and, on the other hand, any viewer should notice that this is the type of incoherent movie in which something huge happens and there are hardly any consequences. In other words, characters get what they deserve but not really as a straight consequence of their actions.

Ultimately, it becomes an over-the-top show, far away from the somber original.

***Spoilers*** From a moving painting for the cheap thrill; the "joke" of having the characters watching the original film on TV; the monster-like voice of a possessed character; to a, pardon my French, fucking post-credits scene with a killer cat (!); ***End Spoilers***

This might just be the silliest Mexican movie of the year, 3D or not.

Darker Than Night opens in Mexico on Thursday, August 14.

Do you feel this content is inappropriate or infringes upon your rights? Click here to report it, or see our DMCA policy.
3DCarlos Enrique TaboadaDarker Than NightHenry BedwellMas Negro Que La NocheMexican CinemaRemake