Review: AS ABOVE/SO BELOW, Found-Footage Garbage In/Garbage Out 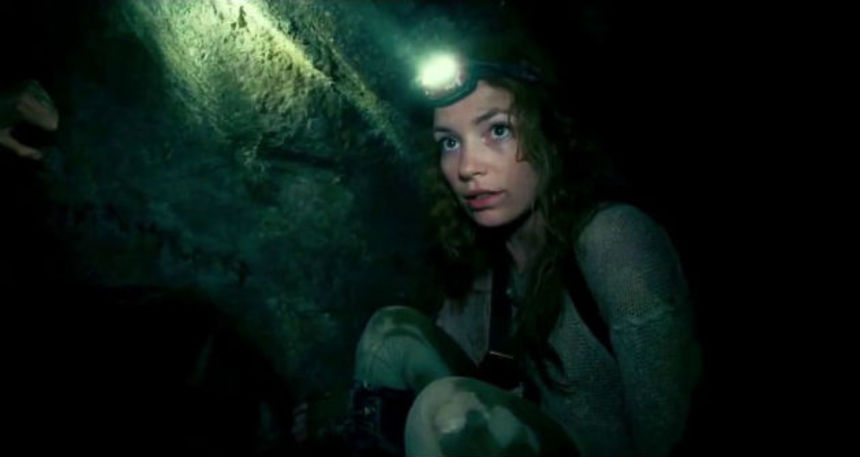 If you gain pleasure from beating yourself up for 90 minutes, have I got a movie for you!

It's been 15 years since The Blair Witch Project, yet filmmakers still insist upon employing found-footage techniques as though they represent an entirely new way of telling a story, as though audiences have not already been pummeled into submission by highly-trained professional filmmakers struggling to pretend they have never made a movie before. For reasons that I cannot fathom, John Erick Dowdle's As Above/So Below represents a bizarre regression in his directing career.

Though I have yet to catch up with Dowdle's debut film, Poughkeepsie Diaries, I felt that his sophomore feature, a remake of the exceptional Spanish thriller [REC] entitled Quarantine (2008), was an above-average horror movie. Yet, re-reading my review tonight, I'm reminded of this point: "The overriding problem with Quarantine is the decision to make the POV that of an amateur videographer. Thus, we're subjected to an entire movie's worth of the dreaded 'shaky cam,' complete with constantly-moving, jittering movements and nauseating whip pans."

Surprise! That same description applies to As Above/So Below. The opening scenes are supposedly photographed by a documentary filmmaker named Benji (Edwin Hodge, the bloody stranger in The Purge), but once the small group heads underground to the Parisian catacombs, the footage is recorded by pin cameras attached to helments worn by various team members. Thus, we're subjected to [most of] of "an entire movie's worth of the dreaded 'shaky cam,' complete with constantly-moving, jittering movements and nauseating whip pans." 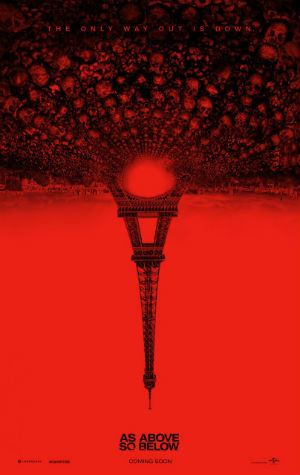 If you're wondering about the plot, I believe it's rendered meaningless by the decision to film the proceedings in the 'shaky-cam' style; it's hard to pay attention when story details are spoken as the camera jitters fruitlessly. For the record, archeologist Scarlett (Perdita Weeks) strong-arms reluctant archeologist George (Ben Feldman) to accompany her on a trip through the Paris catacombs in search of the elusive Philosopher's Stone, which will allow them to meet Harry Potter. (No, that's not it, but, seriously, it's hard to remember such things after your eyes have been bounced around a movie screen for 90 minutes.)

In my mind, the story would have played much better if the filming style weren't so demanding of attention and generally wearisome. Referring back to [REC] for a moment, those filmmakers understood the need for viewers to pause, occasionally, and rest their eyes on stable images for a few minutes, in between the herking and the jerking. Here, there is no rest, only a constant whirling motion as images are flung around restlessly, like watching a popcorn popper for 90 minutes.

Forgive me for mentioning the running time multiple times -- it's actually 93 minutes -- but As Above/So Below seriously tried my patience. Very recently I watched 2010's Devil for the first time, which Dowdle directed but did not write, and I thought it was a good-faith improvement over Quarantine, as far as his directing style was concerned, with greater restraint and improved clarity in the visual storytelling. I'm not sure what happened here.

Dowdle and his brother Drew Dowdle collaborated on the screenplay, as they did on Quarantine, but it complicates the narrative, throwing in additional elements that are intended to frighten the audience, rather than tightening the tension. The key for me: It's impossible to empathize with characters when you feel like you're being jerked around.

Really, I began to feel badly for the actors and the crew, who were doing the best they could, given the circumstances. As Above/So Below feels like the kind of movie that was rushed to theaters without anyone having a chance to say, "Whoa!"

The film opens wide in theaters across the U.S. on Friday, August 29. If you see it, and enjoy it, well, good for you! Feel free to leave a comment to let us know your reactions.

Do you feel this content is inappropriate or infringes upon your rights? Click here to report it, or see our DMCA policy.
Ben FeldmanDrew DowdleEdwin HodgeJohn Erick DowdlePerdita WeeksFrançois CivilHorrorMysteryThriller