Destroy All Monsters: The Human Race Can't Handle Its Imminent Demise, And Other Things I Learned From The Summer of 2014 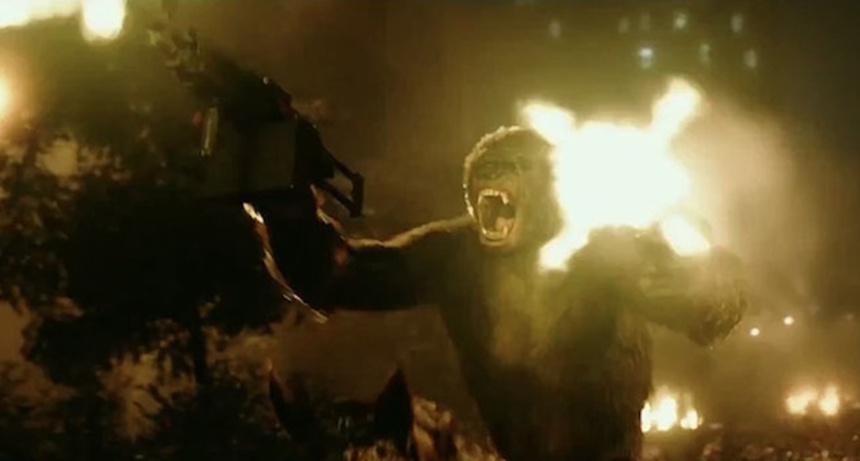 Grosses were down, year-over-year, in the summer of 2014 at the domestic box office. Even the solid hits of the frame -- Maleficent with a sleeper breakaway; Guardians of the Galaxy, at the very tail end of the season, with a bases-clear home run -- weren't the kind of mega-grossers that have ruled the past half-dozen summer seasons at the movies.

There was no Avengers or Dark Knight, which admittedly don't happen very often; nor was there an Iron Man 3 or Despicable Me 2, which is the kind of thing we've been more reasonably able to expect at least once or twice per summer. There wasn't -- and this is astonishing -- a single film that crossed $300M at the domestic box office, and there hasn't been all year. That hasn't happened since 2001.

(Of the films still in competition, Guardians is likeliest to come close, though I expect it will stall out in the $270-$280M range. This will still make it 2014's highest grosser to date.)

The summer of 2014 was all lean middle -- a fair few blockbusters solidly nestled in the low-to-mid $200M category, but nothing beyond that. There was also, it should be noted, nothing from a pop cultural perspective that really reached out and defined the summer, with the possible exception of the Awesome Mix Vol. 1. Whatever the zeitgeist was in the American popular consciousness this year, it's yet to have been grabbed by a movie.

Part of this might simply be the passing of an era. I've been maintaining all year that the majority of the zeitgeist-grabbing has been taking place on television; and, longer than that, I've been saying that movies as we know them now are on their way out.

More pedestrian explanations are also valid: last summer, though profitable, was a pretty piss-poor summer at the movies, in terms of the content living up to the audience's expectations. Perennially a year behind, the audiences might just have said "screw it" this year when faced with another brace of similar, lunk-headed blockbuster-makers.

I think it's even simpler than this: completing an arc into unearned self-importance that The Dark Knight kicked off six years ago, most of the blockbusters at the movies this summer were, to put it kindly, unbelievably depressing.

The major running theme of the year? The earth, and its dominant species (us), is doomed.

This worked just fine for one of last year's sleeper hits, World War Z, because it was, for the most part, the only movie in the season that augured ill for our planetary ability to handle our shit -- and yet still ended, unspectacularly if effectively, on a note of permissible hope.

There was something sickly, though, about the base assumptions of a lot of movies this summer. The assumption was this: civilization's downfall is not merely likely, but inevitable. It has happened or it will happen, because we are simply past the point of being able to do anything to stop it.

(This, the most recent data suggests, is scarcely a child's lifetime away from being true, at least on an ecological level. So, kudos to the movies for bullying up to the pulpit and dealing with the attendant realities, I guess?)

Godzilla was a masterpiece of quietly, almost subliminally, demonstrating human-scale unimportance in the face of god-scale planetary catastrophes. Dawn of the Planet of the Apes suggested that with the ability to form an ideology comes, inevitably, a fall into chaos and war. Snowpiercer laid out the entirety of the human race on a very fast train, and showed, car by car, how the ecosystem of our society is permanently dependent on a weighted balance between the oppressors and the oppressed.

These were the "fun" movies of our summer??

Even the films with substantially less on their minds were glum to the point of funereal. The Amazing Spider-Man 2 broke Gwen Stacy's neck (and Peter Parker's heart), and How To Train Your Dragon 2 turned cuddly dragon Toothless into a hypnotized killer at the expense of the hero's father's life. Maleficent dramatized, absurdly effectively for a Disney film, a fairy-tale date rape -- and made a fortune for it.

(That, I'd argue, also makes Maleficent one of the season's few aesthetic successes as well as being a financial one. There were only a handful of vivid, unforgettable images in cinema this summer. Ellar Coltrane aging in fast-forward in Boyhood was one. Angelina Jolie, crying over her stolen wings and everything they meant, was certainly another.)

Even a couple of blockbusters with unarguably happy endings -- Edge of Tomorrow and X-Men: Days of Future Past- - laid those endings on... what? A complete temporal rewrite of how things have gone 'til now, as though it were inconceivable to move forward and rebuild from this point, because the raw materials are simply too flawed. The only solution, in both cases, was a do-over.

It isn't movies grappling with weighty(er) themes that concerns me; I don't mind a little meat on my blockbuster. But there's a tone of futility in many of these examples that seems out of step with another one of cinema's most basic values: the escape.

Escapism for escapism's sake isn't everyone's cup of tea, but I'd argue it's still a valid and important part of a healthy annual relationship with films. In simpler terms, once in a while, in order to really love going to the movies, we need a movie to make us feel in no uncertain terms that shit is awesome and getting awesomer.

This, of course, is why Guardians of the Galaxy sailed clear away at the very end of the summer; it wasn't just a terrific movie in its own right, but it returned to baser, and more humble, blockbuster aspirations. It made its audience feel fucking great, and did so without sacrificing its own internal logic or sense of self.

Perhaps truly escapist movies like this are irresponsible in a world where shit is largely not awesome, and definitely not getting awesomer. The last few weeks certainly have me thinking about that. But the inability to even conceive of something better has its own problematic outcomes. As the nearest depressed person will affirm for you, an overwhelming sense of futility has never inspired anyone to do anything; or at least, nothing good.

Do you feel this content is inappropriate or infringes upon your rights? Click here to report it, or see our DMCA policy.
box officeDawn of the Planet of the ApesGuardians of the GalaxyMaleficent