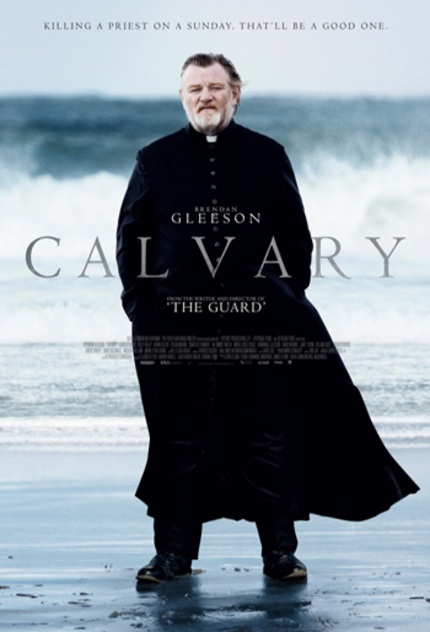 It was back in January that I had the chance to attend the world premiere of John Michael McDonagh's thoroughly remarkable Calvary at the Sundance Film Festival and came away feeling that I had just shared in something special, a film that is not just one of the best of the year but stands a very legitimate chance of becoming a lasting touchpoint years down the road. Seven months on from the premiere that feeling holds just as strong as it did then.

And with Calvary now hitting US screens I am able to revisit the conversation I had with McDonagh the next day, one which touches on the actual film, of course, while also roaming into his thoughts on the creative process in general and the current state of Irish film. Read on.

TB: Let's start with the origins of the story. Obviously Ireland is a very Catholic country but this character seems so specific and so suited to Brendan. Is this something that came out of The Guard? Was this tailored to him?

JMM: Yeah, it started while we were shooting The Guard. I think we were about two thirds of the way through the shoot, we'd become friends by that point anyway. We had a lock in at the pub and got drunk. I was expecting there to be more films about bad priests and the scandal in the church and here haven't been many that have come out for whatever reason, but I said to him that to be original you should do the exact opposite of what people are expecting you to do you should do a film about a good priest. And he said, "Oh, there was a priest who was a mentor to me when I was young, I'd love to play a good priest." So that's the initial idea.

The narrative hook about being threatened with death and you've only got six days to live I thought was a good one, obviously I'd been influenced by Hitchcock's I Confess. There's a film I love called True Confessions with Robert Duvall and Robert DeNiro where DeNiro gives one of his most underrated performances, I think, as a priest who is essentially a good priest who loses his way and then finds it again. I always had those sorts of ideas and I wanted to make a film in County Sligo, where my mother is from and I'd spent some holidays there, so I thought, "I've got a good character, I've got the essence of a story and I've got the location." So that was the starting point.

TB: One of the things I found really remarkable about it - not just with Brendan's character but with all the characters - is that it's lining up all the criticisms of the church and the things that get thrown at it all the time, but it never gets ... you mentioned not wanting to be didactic in the Q&A, and it's always about the emotion in the character rather than becoming any sort of screed. It's very, very balanced ... you can understand the people that are angry but you also understand it's not Brendan's fault, that all he's trying to do is be a good person and help people.

JMM: Exactly. You're trying to deal with those issues but you're trying not to be overbearing about it and you're trying to bring those issues out through each separate character that brings them up. Yeah, he's not responsible for it but, as various characters say, "You're a representative of the church that IS responsible for it." And then we deal with other characters who are dealing with the consequences of the financial collapse in Ireland - and the rest of the world as well - it's kind of an anti-authoritarian film in a way. People have been misled by politicians and financiers and the church all down these years, you know, and what are they going to do about it? They're part and parcel of it. They gave these people this power and then they try to turn around and say, "It's not my fault, it's yours." Again, that's making it sound really heavy handed when you're trying to deal with it in a kind of smoother, more entertaining manner ... although it's kind of a dark film.

TB: It's dark but it's still quite funny.

JMM: Right, right. I'm trying to have that humor all the way through. I mean, we were talking just now about Dylan Moran's character and I find that one  the most affecting because you're presenting a character who appears on the surface to be quite cliché, a blasé financier who's spendthrift with his money and is a prick. But then he turns out in his emotional arc to be someone who is quite suffering and in as much need of spiritual help as anybody else. I'm quite proud of the conception of that character.

TB: I think what's interesting about him is his defense of himself, that sequence when they're standing at the case and Dylan saying, "Nothing's going to happen to me because nothing ever happens to people like me." He's right! He's completely correct and in a weird way that's what's left him adrift.

JMM: Nobody's going to jail. Nobody's going to jail in either the financial scandals or the church scandals, there appears to be no comeuppance any more for these people. And Brendan's character knows that. In a way his suffering, his Calvary, is that he's taken on that responsibility that he shouldn't really have to take on but, as a representative of the church, he does. But that whole line about, "Nobody's coming to arrest me," that's sort of killing Dylan because he's not paying for what he's done and he wants to pay, I guess. There's a lot of self-destructiveness in the movie.

TB: So, you would have been working with this when the previous pope was in ...

TB: The pope who actually seems to agree with you.

JMM: Exactly, yeah. I've been following him, that's been a good story. But the church had to change, obviously he was appointed for that reason. They have to regroup and there has to be a new foundation. They're trying to do it that way, I suppose. That's a positive thing, I guess you could say.

TB: In the introduction the programmer who introduced you made a couple of comments about how many Irish films there were in the program and how there seems to be something going on there right now. If you look in England it seems like the talent base has stagnated and there haven't been a lot of new voices and then you look at Ireland and it's different ... you and your brother obviously occupy a certain tier, but there's something happening that's hard to put your finger on ...

JMM: Yeah, there's Lenny Abrahamson's Frank here. I think, in particular, there's a robustness to Irish actors. They seem to do films in America and the rest of the world while there's kind of a fey aspect to actors from England ...

TB: As a storyteller that gives you a broader palette to work with?

I wouldn't agree, really, that there's a new wave in Ireland or anything, though. The Irish films that I see I find very poor, both in their literacy - in the quality of their scripts - and in their visual competence, honestly. There seems to be this whole, "Let's just shoot the movie!" idea which leads to some of the worst movies I've ever seen.

I think you need to be prepared. You need to have written a good script. You need to have read some bloody books before you write the script. I find there's a lack of intelligence and a lack of intellectual bravery with scripts with movies. I don't ... you know ... obviously Lenny has made some good movies but I don't find there are a lot of other people coming through that I can see. There are a few films I haven't seen recently, in the last year. It remains to be seen.

With The Guard, you know, I thought there were going to be a lot more. With the popularity of that film both in Ireland and internationally I thought it would inspire people but I haven't seen evidence of it, to be honest.

TB: The Gleeson clan in general. There's three of them working as actors now?

JMM: Yeah, and people like Aiden Gillen and Liam Cunningham, they're doing Game Of Thrones now ... they have to leave to find good, challenging work. Chris [O'Dowd], obviously is becoming an American star as well. It's a bit disappointing.

TB: In the Q&A you commented about how Brendan was able to be a better priest because he'd lived a little before becoming a priest.

TB: I worked five years in homeless shelters in Toronto and in one of them we had a group of Franciscan friars who volunteered every week, almost all of whom had lived full lives and careers and then taken vows in their fifties.

TB: Even for you as a creative person, doing what you're doing, it seems a lot of what you were saying applies to you personally. In terms of filmography you're a young filmmaker but you've had a life.

JMM: Yeah, yeah! I've struggled to get films made, I was in my forties when I got my first film made as a director, so yeah, you're right. I've had good experiences. I read voraciously. I see lots of movies. I take in life. I've traveled a fair bit.

I can see it in the scripts I get sent. You start reading them and you're like, "This is written by a twenty two year old guy who just got out of USC." You can tell from the first page that's what it is because it doesn't reference life, it references other movies. I think that's quite common. I feel now that I'm in quite a rich vein of form, I feel quite confident when I sit down to write. And when I look back at the scripts I wrote in my late twenties or early thirties, I think some of them are pretty good but I don't think they have the richness or the depth that I'm trying to do now. They're more flippant or ironic, which people are in their twenties.

Do you feel this content is inappropriate or infringes upon your rights? Click here to report it, or see our DMCA policy.
brendan gleesoncalvarychris o'dowdinterviewjohn michael montgomery