Review: DELIVER US FROM EVIL Delivers The Horror Goods 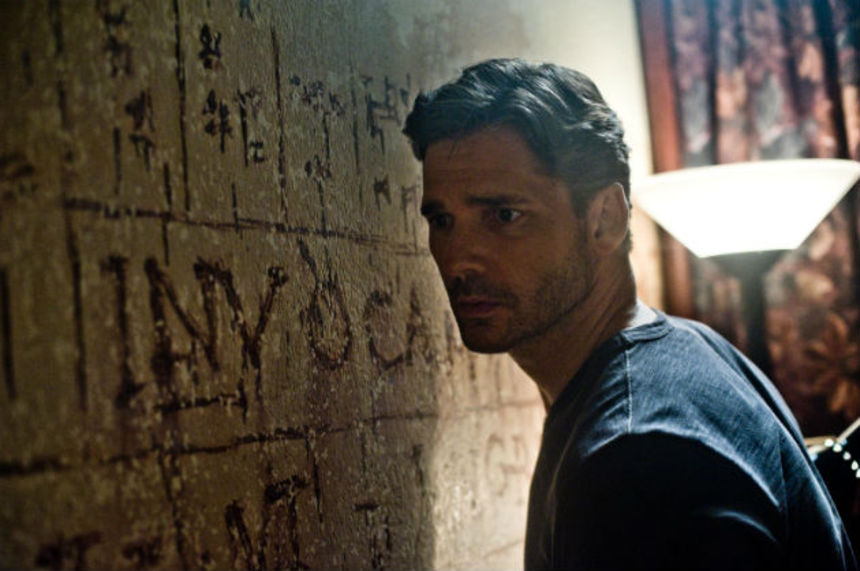 A totally engrossing freak-out, Deliver Us From Evil may not make you believe in demons, but it will convince you that talented filmmakers can create a world in which such spirit creatures exist and exert a powerful influence upon unfortunate souls.

Grounded in hard-bitten reality, which makes it all the more unsettling, the film is inspired by the true-life experiences of Sergeant Ralph Sarchie (Eric Bana), a wary veteran in the New York Police Department who has a nose for trouble. His partner Butler (Joel McHale), a self-admitted "adrenaline junkie," calls it "radar." Sarchie's "radar" leads them to a troubling domestic disturbance call and then to the aftermath of a horrifying incident at the bedarkened Bronx Zoo, where they must locate a woman who attemped to kill her infant son.

The woman is clearly disturbed, making only gutteral noises and absolutely no sense, but she proves to be an integral part of a very puzzling case that Sarchie is compelled to investigate, working the night shift and consistently leaving his wife Jen (Olivia Munn) and six-year-old daughter Christina (Lulu Wilson) home alone, missing him. For his part, Sarchie has begun hearing strange voices and seeing disturbing imagery that no one else can hear or see, which perhaps makes him more open to the idea of a Jesuit priest named Father Mendoza (Edgar Ramirez) helping out on the case. A reasoned and reasonable man, Father Mendoza suggests that the disturbed woman is displaying signs of demonic possession, something that Sarchie dismisses out of hand, at least initially.

Scott Derrickson has delved into demonic territory as far back as his directorial debut, Hellraiser: Inferno (2000), which followed a corrupt police detective who is faced with diabolical, supernatural evil. He co-wrote that film with Paul Harris Boardman, who was also his collaborator on 2005's The Exorcism of Emily Rose, in which a teenage girl is possessed by a demon. 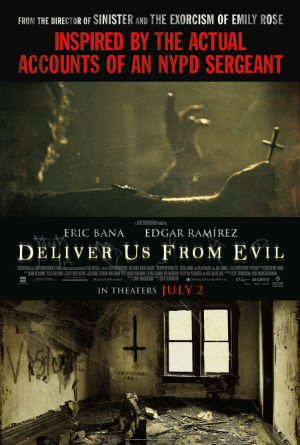 While their latest collaboration in horror may sound superficially similar, Deliver Us From Evil quickly establishes its own identity, revolving around Sergeant Sarchie. Paired with Butler on the job, the two banter easily, and back each other up without question, the younger man respectfully deferring to his Sergeant's judgment. Paired with Jen, Sarchie is an old-school husband, kind and loving yet distant, which is proving increasingly frustrating to his stay-at-home wife. Paired with Father Mendoza, Sarchie is, by turns, polite, intrigued, and then completely cooperative.

As a director, Derrickson's increasing mastery of pace, tone, and atmosphere bolsters the material and the performances. Working for the first time with cinematographer Scott Kevan, whose burnished photography on 2005's Rx sticks in my memory, and editor Jason Hellman (Joe Carnahan's The Grey), Derrickson constructs a story that is constantly being propelled along as through by a strong river current in the middle of the night, the moon peeking through trees only occasionally.

The visual scheme keeps things deliberately in the shadows, allowing for 'gotcha' moments that emerge from the cluttered landscape of a desolate South Bronx, which makes more sense when remembering that much of the action takes place in the post-midnight hours. As the tale reaches the rapids, as it were, it becomes stronger, more intense, and more frenzied, always in danger of spiraling out of control but not quite flipping the film out of the realm of credulity.

Ramirez, in particular, uncorks all the stoppers in a mesmerizing finale that is dependent entirely on whether the participants believe. And there is no question that they do, and so, because they believe, we must respect that, and decide for ourselves the source of that scratching sound that's coming from under the floorboards.

The film opens wide in theaters across North America on Wednesday, July 2.

Do you feel this content is inappropriate or infringes upon your rights? Click here to report it, or see our DMCA policy.
Edgar RamirezEric BanaJoel McHaleOlivia MunnScott Derrickson

More about Deliver Us From Evil