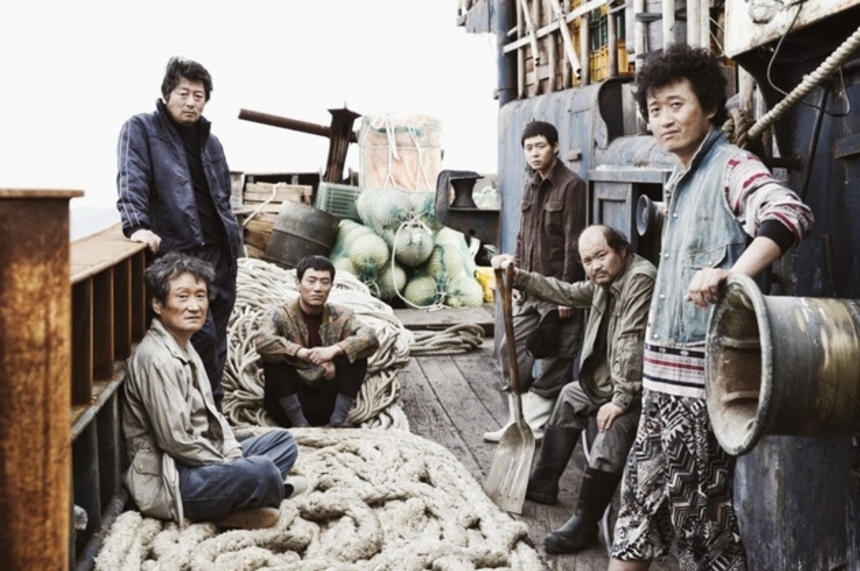 At the request of Finecut, the film's international distributor, the title of the film has been changed to Haemoo. Sea Fog was a working title used up until this point.

To date, the summer of 2014 has seen the majority of mainstream Korean films fall into either of two categories: the noir thriller or the period blockbuster. While a handful of terrific genre pieces, namely A Hard Day and Confession, have succeeded in spite of this inertia, it's been high time for something a little different. Along comes Haemoo, a character-driven blockbuster set on a boat that is based on a play which is itself drawn from a real life incident.

A fishing trawler returns to port with a meager catch and when its captain is offered a pile of money to help some Chinese-Korean illegal immigrants sneak onto the peninsula he is quick to pocket the cash. He heads back out to sea along with his five-man crew and in the dead of night they make contact with another vessel carrying their payday. Soon the youngest crewmember forms an attachment with one of the smuggled girls, but as tensions between the crew and their passengers mount and when the Korean maritime police suddenly appear, things quickly spin out of control.

You can often count on Korean cinema to take a familiar setting and turn it on its head. Sea Fog brings other open sea blockbusters such as Jaws (1975) and The Perfect Storm (2000) to mind, but it is a great deal darker than what you would expect from commercial cinema, particularly a blockbuster of this size (at least by Korean standards). First time director Shim Sung-bo and his co-writer and executive producer Bong Joon Ho deliver a film that is as somber as the latter's recent Snowpiercer. But with a far more realistic setting and less of Bong's trademark wry humor, Haemoo packs a thunderous emotional whallop.

Much like Bong was confronted with when shooting an ambitious film within the limitations of a train, Shim and cinematographer Hong Kyung-pyo (also the DP on Snowpiercer) are tasked with running the audience through a gauntlet of thrills and emotions within the confines of a small fishing boat. The brooding weather, which veers from stark daylight and ominous night to thick batches of creeping fog, ably amplifies the foreboding tone of the film. Equally impressive is the claustrophobic interior lensing. Every shot is permeated with a dank warmth that acts as a refuge from the literal and figurative tempests that take place on deck before turning the space into an oppressive tangle of burning pipes offering no exit from the encroaching terror. Throughout, the fluidity between shots, which evolve as actors move within or in and out of frame with clear precision, makes the film's visual tone rich and expressive.

Haemoo, which secured a choice mid-August release date, is presented as a summer blockbuster, but it is far more concerned with characters than visual spectacle. While the film is expertly made, all its visual thrills are present to serve the characters and their complexly interwoven moral trajectories. But a sagacious mise-en-scene can only get you so far. Thankfully, the film's greatest strength lies in its cast.

Most familiar to viewers will be Kim Yun-seok, whose droopy, yet keen eyes have brought some of the most fearsome characters in modern Korean cinema to life. His turn here recalls his roles in The Yellow Sea (2011) and Hwayi: A Monster Boy, both for its commanding presence and ruthless practicality. In a position of authority and placed in a horrifying situation, Kim's Captain is a man who makes quick decisions and follows through at all costs.

Park Yoochun, a member of the Kpop group JYJ, convinces in his first major film outing as the youngest crewmember. He and Han Ye-ri, a rising star who does her best work to date, serve as the emotional core of the film. Theirs is an unlikely romance, but the young thespians sell it by avoiding histrionics in favor of soft palpitations and pellucid expressions. As the remaining members of the crew, veterans Moon Sung-geun, Kim Sang-ho, Lee Hee-joon and Yoo Seung-mok each manage to turn their gruff fisherman into unique and complex individuals.

Haemoo explores some bleak territory and considering its setting and plot, unfortunate but inevitable similarities with the recent Sewol Ferry Sinking do arise. Given how fresh a memory that is and how powerful a film this is, it may act as a painful reminder to some. It remains to be seen whether this affects the film's eventual returns, but it doesn't make the film any less compelling.

The only place where Haemoo stumbles is in its final reel. By rehashing a few well-worn genre tropes and temporarily abandoning its engaging character arcs, it feels as though the production is ticking a few boxes that its big budget requires it to. However, the film does still end on a strong note. As dark and daring a blockbuster as they come, Haemoo is a terrific summer tentpole, and one like no other.

Do you feel this content is inappropriate or infringes upon your rights? Click here to report it, or see our DMCA policy.
bong joon-hohaemookim yun-seokkoreakorean filmsae fogsewolthriller봉준호해무