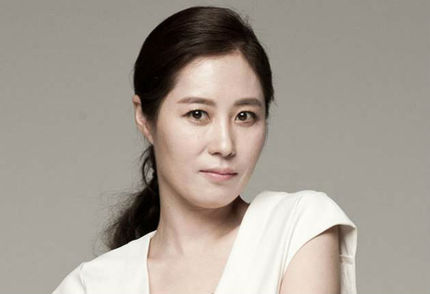 Moon-So-ri won acclaim for her fearless roles in films like Oasis and A Good Lawyer's Wife. She comes to the New York Asian Film Festival with Manshin: Ten Thousand Spirits, a surreal docu-narrative about the life of a shaman.  We talked about the advantages of not fitting into Korean beauty standards and being an actress of a certain age.


The Lady Miz Diva:  Please tell us what brought you to MANSHIN?

Moon So-ri:  This might be a behind-the-scenes story about the casting, but the director, Park Chan-kyong, had a short film called Night Fishing, and I was actually supposed to be in that film.  I was getting ready for the film for about a month, learning all the things that Manshins do.  I found out on the day of shooting that I was pregnant. {Laughs} For the film, I would've had to go into cold water in the winter and it was just too much with the baby.  The doctor recommended that I not participate in the film, so I felt really bad about it because it was actually the day of the shooting.

So, I had the baby and then a little while later, Director Park gave me a call and said, "I'm starting a film called Manshin and I would love your help."  So I couldn't say no. {Laughs}  So because of the film before that, I was learning all of the Manshin's performance anyway, so I thought I can actually help you out.  So the director gave me the book by Manshin Kim and when I read it I was very inspired and it gave me more inspiration to participate in this film.

LMD:  Did you meet Manshin Kim beforehand or did you prefer to derive your performance entirely from the script?

MS-r:  I actually watched a lot of video clips of Manshin Kim's performances from the past.  Actually, Manshin Kim is very old now, and she's not in the best of health, so I couldn't actually meet her as much as I wanted to and get her perspective.

For me, to do the performance is more technical, but I thought it was more important to understand the Manshin's mind and her perspective.  I believe understanding that brought me closer to actually becoming Manshin Kim and acting as her.  Since the movie is part documentary and part reenacting drama, the audience is going to know for sure that there is Moon So-ri, who is playing Manshin Kim, and there is the actual Manshin Kim, who comes out in the film.  So I think the most important part is for my acting to be exciting for the audience more so than trying to be Manshin Kim and act as though I am her.  So I just wanted as an actress and as the actual Manshin Kim coming out, for those two to combine together naturally.

MS-r:  I don't think that it's essential to have a relation between the actor Moon So-ri and the character I'm playing.  As a human being, we're all going to have some sort of relatable situations and we're also going to be very different.  I thought the life of a Manshin was actually very similar to the life of an actor.  So a Manshin and also an actor, they sort of take in the character's pain and - to fix it is not the right word, because that's what a doctor would do - but as an actor, as a Manshin, what they do is sort of emotionally caress the pain: Not make it go away. but make it able to be endured.  So the pain and the hardship that Manshin Kim went through as a Manshin, I thought was similar to the pain and the hardships that actors have to go through in their lives, and so I was able to empathise, sympathise and relate to that.

LMD:  MANSHIN is a very experimental and unique film.  You are known for your work with some of Korea's most innovative directors, like Lee Chang-dong, Im Sang-soo and Hong Sang-soo. What do you receive as an actor working with these directors who have such wildly creative points of view?

MS-r:  Finally, I'm very lucky.  When I was younger actress, I didn't think that it was very lucky for me to partake in these experimental movies; but now with age and experience, I feel that I was very lucky to be part of all these films.  I think it's most essential and important as an actress to communicate well with the director.  So through the communication with these experimental and creative directors, I've learned so much more than I learned at schools and other academies; not just about acting, but about life, about humans, about the world.  I feel very thankful to be part of their films.

When I first debuted in Korea, everyone was saying that I had a very plain, ordinary face.  Hearing those sort of remarks, I think it actually might've help me partake in these experimental films.

LMD:  When I spoke with your co-star, Mr. Sol Kyung-gu {PEPPERMINT CANDY, OASIS} he mentioned that the set of Director Lee Chang-dong's films is very intense.

LMD:  Are you an actor who prefers to have a feeling of intensity on the set as you play your roles, or are you happiest in a more comfortable, looser atmosphere?

MS-r:  Director Lee Chang-dong and Director Hong Sang-soo, those two are very different, and the atmosphere of their productions is very different.  To say it metaphorically, these two different atmospheres are like a mountain; one may be very hard to hike and very high, while the other mountain may have a very easy trail and may be a low mountain, but I don't really think that one is more meaningful than the other.  As long as these mountains exist for me to hike and climb, that makes me happy.

LMD:  Yourself, Uhm Jung-hwa, Jo Min-soo, Jeon Do-yeon are actresses of a certain age who are still very popular in South Korea.  Here in the West, we always hear about how actresses over 40 have such a hard time finding good roles, or no one takes them seriously as romantic leads.  Is it the same in Korea?

MS-r:  That is what I actually thought when I was younger; that as I age, then there will actually be no more roles left - or not as many.  But I absolutely had no idea that the Korean film industry was going to go into a road where there were so many movies with just male actors.  So I do think that there are going to be different periods; in the 1980s, the Korean film industry was mostly women actors in all the films, and now it's a period where it's movies with mostly male actors.  Truthfully, it makes me very sad.

I think that if that era is a very healthy era for films and for filmmakers, there should be many roles for both men and women.  I think when the industry is dominated by one particular role, it shows that the industry is not very healthy.  For us to say that it's healthy is when there are many different roles for many different characters, so everyone can participate in film.

LMD:  You began in theater and you occasionally go back to theater.  What does being on stage give you creatively?

MS-r:  I think that any foundation for acting comes from stage acting.  So when I go back into theater, it's like a recovery for me.

LMD:  You are a professor of film studies in South Korea.  Can you please give me your opinion as to whether it is important for young or beginning actors to know film history or study some of the great cinematic roles?

MS-r:  I actually always tell my students that media is not so important.  Also, I know that I should teach film; I don't. {Laughs}

So, what I focus on in my classroom is, I don't necessarily think that my job as a professor is to teach the students how to become a good actor; but I want the students to be able to find their identity as an actor.  I know that it's very hard.  What I do mostly with my students is communicating about the hardship to obtain that actor identity.

LMD:  What would you like audiences to take away from MANSHIN?

MS-r:  For my Korean audiences, I want the time to be looking back on how if we, as Korean people, looked down on the culture of Manshin.  If that happened, I want the audience to look back and repent.  A culture is not something that should be looked down upon.

For foreign audiences, this particular performance, or this culture may be very weird or very exotic, but I don't want that to be the reaction of the audience: I want the foreign audiences to look at it as a part of our culture - just part of Korean culture, nothing special or nothing exotic, just our culture.

LMD:  What is next for Moon So-ri?

MS-r:  Hong Sang-soo's new film, Hill of Freedom, with the Japanese actor, Kase Ryo, is opening in September and I'm appearing in the movie. I haven't decided upon any other films now, I'm just working in the Korean broadcasting media.


This interview is cross-posted on my own site, The Diva Review. Please enjoy additional
content, including exclusive photos from the festival there.