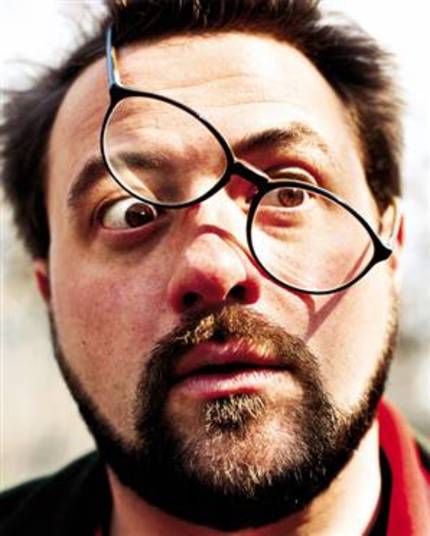 It would appear that Kevin Smith and Steven Soderbergh are locked into a duel to the death to see which of them can direct the most stuff after announcing a retirement from directing. Not, of course, that we're complaining about this.

With Smith's horror film Tusk awaiting release from A24 and his holiday horror anthology Anti-Clause already announced and pre-sold for distribution in major territories around the globe Smith has spilled word to Screen International that he'll also be shooting a spin off to Tusk titled Yoga Hosers before the end of the year. Says the writer-director: "There are two characters in a convenience store in Tusk that you see for five minutes, very much Ronsencrantz and Guildenstern. I've built a whole movie around them and I have brought one of the other characters from Tusk back."

Yoga Hosers is fully financed so, yes, this is for real. And, yes, given that XYZ Films [where I'm a partner] is handling global sales for both Tusk and Anti-Clause it's safe to assume that we know a thing or two about this one as well and, yes, it's absolutely gonzo. Smith's take on Canadiana - the title is a deliberate Bob and Doug reference - is very amusing to this particular Canadian.

Do you feel this content is inappropriate or infringes upon your rights? Click here to report it, or see our DMCA policy.
ComedyHorrorKevin Smithtuskyoga hosersLily-Rose DeppHarley Quinn SmithAdam BrodyHarley MorensteinFantasy