ALLELUIA, COLD IN JULY, GOODBYE TO LANGUAGE at Sitges 2014 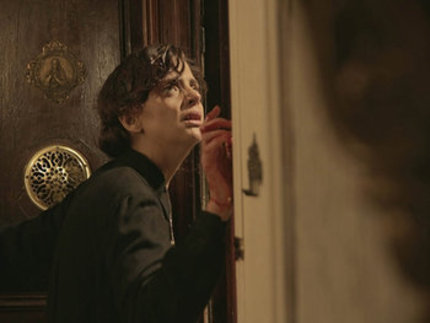 The countdown is on to my favourite festival! Sitges 2014 is on this October 3 - 12 on the sunny shores of the Mediterranean, and the first wave of amazing programing was announced this morning. Among a plethora of titles, is was announced that the festival's Grand Honourary Award will be given to Roland Emmerich (The Day After Tomorrow, Universal Soldier, Stargate).

As previously announced, the festival will open with [REC]4, the final installment of the amazing pseudo-zombie saga, directed by Jaume Balagueró. Among other great titles to be seen are Cold in July, Under the Skin, What We Do in the Shadows, Map to the Stars, Alleluia, Goodbye to Language (is this the first Godard to be at Sitges, I wonder?), and the latest from Marjane Satrape, The Voices. I'm pretty excited about the first film from Alex de la Iglesia and Carolina Bang's production company Pokeepsie films, Shrew's Nest.

Sitges has always had a strong crop of Asian cinema, and this year is no exception. With R100, Dante Lam's The Demon Within, Kim Ki-duk's One on One, and the latest from Takashi Miike, The Mole Song. There's also a couple of interesting documentaries, one on famous Spanish director Vicente Aranda, and another on French production company Eurocine.

The festival is continuing with their new Phonetastic film festival (get your androids out!), and also introducing a new award for short filmmakers. All in all, you have very few excuses not to make your way there this October. Full details in the press release below.

German director, producer and screenwriter Roland Emmerich, an important figurehead in action and disaster movies and creator of popular films like Independence Day, Godzilla, 2012, Stargate, Anonymous, The Day After Tomorrow, White House Down or Universal Soldier, will receive the Festival's Grand Honorary Award at this year's edition, which will take place from 3 to 12 October. Sitges 2014 will be featuring renowned directors like Jean-Luc Godard and David Cronenberg with their latest films, as well as the anxiously awaited presentation of Musarañas, the psychological horror movie produced by Álex de la Iglesia.

Sitges 2014 will be offering Adieu au langage, the latest sophisticated and intriguing work by Jean-Luc Godard, the genius of nouvelle vague, who's back to show us that he's still in tiptop shape, now experimenting with 3D in a story full of metaphors and barking. David Cronenberg arrives at Sitges 2014 with his decadent portrayal of the film industry, Maps to the Stars, an unmerciful satire with an all-star cast including Julianne Moore, Mia Wasikowska, Robert Pattinson and John Cusack. Belgian filmmaker Fabrice Du Welz, a familiar face at the Festival, where he picked up the Méliès d'Argent in 2003 for his first feature length film, Calvaire, is back to present Alleluia, his particular outlook on the notorious "honeymoon killers" from back in the 1940s in the USA. Like Du Welz, another excellent representative of the Sitges Generation is Jim Mickle (We Are What We Are, Stake Land), who will be visiting Sitges this year with Cold in July, a bloody vengeance movie, and an example of the very best in American independent film.

Jonathan Glazer will be landing at Sitges 2014 with his eagerly awaited Under The Skin, a sci-fi drama starring Scarlett Johansson as an alien. On this occasion, the director of Birth (Sitges 2004) presents a visually powerful film with a very particular view of the human species. Equally stimulating is the Dostoyevski adaptation that Richard Ayoade proposes with The Double, a black comedy starring Jesse Eisenberg and Mia Wasikowska. The famous graphic novelist Marjane Satrapi will be premiering The Voices, another black comedy where Ryan Reynolds tries to hide a dead body, which the Iranian director presents in Sitges after its fantastic reception at Sundance. Arriving from the same American festival is The Guest, the latest from Adam Wingard, that delves into the story of a former soldier who unleashes violence when he returns home from the war, and that has been compared to Drive. Alexandre Bustillo and Julien Maury, directors of Livid, will be bringing their Aux yeux des vivants, another disquieting example of French horror.

Sitges presents itself as a festival where the classic monsters all coexist, even though they are sometimes filtered through a more iconoclastic sieve. Fantastic tradition and a more transgressive modernity join hands to reinvent immortal subgenres like vampire cinema. This 2014 offers us two clear examples. On the one hand, A Girl Walks Home Alone At Night, a marvelous reinterpretation of the vampire myth embodied in an adolescent American girl of Iranian descent, which was a huge hit at Cannes. Shot in the Farsi language, it's a work from young filmmaker Ana Lily Amirpour and Elijah Wood is one of its producers. The other example of these non-dead regenerative proposals is the black comedy and faux documentary from New Zealand What We Do In The Shadows, directed by Taika Waititi and Jemaine Clement.

Catalan and Spanish cinema will be especially featured at Sitges 2014. In addition to having [REC]4: Apocalipsis, by Jaume Balagueró, as its inaugural film, and La Distancia, by Sergi Caballero, the Festival will be premiering Musarañas, a psychological horror movie set in the post-war era that recaptures Iberian classic gothic and fantastic. This is the first film financed by Álex de la Iglesia and Carolina Bang's new production company, Pokeepsie Films, and is directed by Juanfer Andrés and Esteban Roel. It stars a good number of famous faces: Macarena Gómez, Carolina Bang, Luis Tosar or Hugo Silva.

As usual, the Festival will be showing some of the very best in Asian cinema, with a bunch of the titles most eagerly awaited by faithful genre followers. From Hong-Kong (with the inestimable collaboration of The Hong Kong Economic and Trade Affairs Office) arrive That Demon Within, by Dante Lam; The Midnight After, by Fruit Chan, and Aberdeen, by Pang Ho-Cheung. South Korea will be contributing the films A Hard Day, by Kim Seong-hun; Mad, Sad & Bad, by Avie Luthra, and the latest film from Kim Ki-duk, One on One, that tells the story of the persecution of a young girl's killer. Arriving from Japan is the latest film from Takashi Miike (Grand Honorary Prize winner at a Sitges 2013): The Mole Song: Undercover Agent Reiji, the story of a police officer who has infiltrated a mafia gang. Also with a Japanese accent are R100, by Hitoshi Matsumoto, the real life adaptation of the famous manga Lupin the 3rd, directed by Ryuhei Kitamura and distributed in Spain by Mediatres Estudio, and the extremely controversial The Torture Club, by Kota Yoshida.

The new Blood Window category, geared towards Latin American fantastic cinema, will include the latest work by Adrián García Bogliano, Late Phases, where a war veteran, during his final battle, will have to fight a werewolf. Argentinean Martín Desalvo will present El día trajo la oscuridad, about the terror caused by an outbreak of rabies in a small town, and Uruguayan Gustavo Hernández arrives with Un dios local, a daring experimental film.

On the other hand, this year the Brigadoon category will be presenting a lineup including the outstanding Bombshell Bloodbath, a film directed by Brett Mullen and influenced by Italian zombie movies like Zombi 2 or Nightmare City. In addition, the executive producers of The Ring present Dark Awakening, a supernatural thriller directed by makeup specialist Dean Jones.

Documentaries will also have a notable presence this year: Vicente Aranda. 50 años de cine, by brothers Francisco and Javier Prada, reviews the movie career of the Catalan filmmaker. On the other hand, Eurocine 33 Champs Elysées, by Christophe Bier, is a work focusing on the legendary French production company Eurocine, a factory that closely linked to works by filmmakers Jesús Franco and Jean Rollin. Brigadoon will also offer a film series in homage to actor Craig Hill, who passed away last April. This year, the Nosferatu Award will go to actress María Kosty, dedicated to this profession since the late sixties and with a strong presence in seventies Spanish horror and fantastic films.

This year the Phonetastic Sitges Mobile Film Festival is celebrating its second edition as a showcase for audiovisual productions shot with tablets and smartphones. Its website (www.phonetasticfestival.com) is the reception channel for pieces from all over the world. And genre TV series will once again have a featured presence at the Festival, with its very own space, lineup and section: Serial Sitges.

Cine365Film Award
This year the Festival is adding a new award: Cine365Film, that will distinguish filmmakers with a short film selected for the Festival with financing of resources for shooting a fantastic genre film. The award is born from an agreement between the Sitges - International Fantastic Film Festival of Catalonia, the Apaches Entertainment Production Company and Cine365.

The new Cine365Film award is cross-sectional and all Spanish directors participating with a short in the Official, Brigadoon, Phonetastic and SGAE Nova Autoria categories at Sitges 2014 are eligible. The winner will receive 10,000 Euros and will be able to shoot a film that will be included in the lineup at the Festival's 48th edition in 2015. The winner will be chosen during the 47th edition.