Exclusive Interview: ScreenAnarchy Talks To Michael Pitt and Mike Cahill about I ORIGINS

I Origins is a big little film, tackling issues of identity and ethics under the rubric of a sci-fi film. Taking the notion of eyes being the windows to the soul to a heightened level, the film blends science and metaphysics to create an interesting hybrid of a thriller and a romance.

ScreenAnarchyhad an exclusive conversation in Toronto with the film's director Mike Cahill, along with the lead actor Michael Pitt. The two were energetic and enthusiastic about the project, an enthusiasm that proved infectious.

Michael, what brought you to the story?

Michael Pitt: I had a general meeting with Mike in Brooklyn, just a meeting of artists. I wanted to meet everyone who was living where I lived who was making things. What was amazing is that we really hit it off.

[Cahill] had about 5 or 6 ideas going through his head. He explained this one to me, and out of all of them I remember saying very casually that it was really interesting, and that I thought that he should really put some time into it.

The next day I got an e-mail with the treatment, maybe 2-3 weeks after that he turned around the first draft.

The best experiences working with a director are seemingly organic and casual, but no time is wasted and people are very ambitious. That has been the experience from beginning to end. He's got a great sense of humour, but doesn't waste time, is very serious about what he wants to do and what he wants to accomplish as a filmmaker.

Mike, what was your connection to Mr. Pitt?

Mike Cahill: My agent basically said would you like to meet Michael and I lept at the opportunity. I had admired him from afar for a long time because he has the highest level of integrity of any actor, whose choices are so bold. If you look at the history of the films he has done, nobody can hold a candle to that bold strength. Ballsiness! His micro choices are always surprising within scenes.

When he was engaged by this idea for I Origins, it really set ablaze this excitement that I may have this opportunity to work with this person whom I admire, [that] I've got to get serious.


After he read the script we basically started workshopping right after that, going to the lab and spending time with scientists. 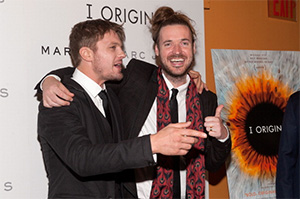 Was the connection initially one of story or of a connection between the two of you, between performer and director?

MC: We just got along.

MP: We got along, which was a great thing.

Is that always important?

MP: To be honest, when it's about talent and creativity, if the person's really good and you're really good, you usually get along. I do think it's important. It doesn't mean that something good can't be made with someone that maybe you wouldn't go have a beer with, but it's certainly such a better experience.

There are some who would argue that art needs friction, needs to be struggle, that the director needs to be yelling at the actor in order to elicit a performance.

MP: Yeah, if you both understand that sort of challenging. It's like scientists -Two good scientists will sit down and debate very strongly their beliefs. If there's a mutual respect, then maybe even more strongly. If you understand that and understand that if you're both on the same page about that, maybe to someone watching they'd be like well, it doesn't seem like they get along.

Science is predicated on this very strict method. As long as you follow this specific method, everything works out. As long as you can agree upon the foundation by which the creativity can be expressed, everything on top of that can work out, if there's conflict, it's ideally going to be agreeable, because it's based on these methodologies.

MP: It's like having confidence in your talent and your mind and lack of ego. You need a strong ego to do what we do. I think scientists need a very strong ego. But you have to be very confident in your ability. Someone who is truly confident in their ability welcomes the challenge.

That's something that Mike has as a director. He's very confident about his vision, and questions or debates are part of it. There's a type of director that would take a question or a debate as problematic. Then there's a whole other type of director that takes a question or a debate as an opportunity one to explain his vision and also says tell me the holes you see because it makes my vision stronger. If you overcome that, it will make my vision stronger.

I think it's fair to say that this is one of the most cerebral characters you've played. I know Cahill loves this stuff, but do you share his passion for scientific enquiry?

MP: I do share a passion. I left school at a very young age. I went to a very bad school, the bad schools in America [that] you hear about that. I removed myself from that situation because it was bad, so much of my education came from me educating myself.

There were things that I was very interested in that were not practical for me to learn about. [As for] formal education, if you don't really get that, from whatever hand that you're dealt, it doesn't mean that you don't strive for that, or that you're not interested.

Working with the directors I've worked with, they asked a lot of me and it's understood that you've researched; you need to know your shit.

One of the things that I do love is researching. I love developing characters and I love doing that. There's no better way of doing that than when you can do that with a director and he's encouraging that. And with Mike, it was like that all the way.

The hardest thing I think from the story perspective is bridging that gap between the scientistic and metaphysical perspectives and the notion of pure scientific understanding and the slightly more spiritual thing that we develop when we see the connection, the inexplicable connection, the statistically impossible connection. I'm just wondering, was that a core idea, of the split between the scientific and the spiritual when you were developing it?

MC: I think key to that question is in the scene where Sophie comes to the lab and she sees that Ian is modifying worms that have two senses and he's giving them a third sense which is vision, and that's real, true science. Scientists can do that in a laboratory, take a worm and give it another sense.

I think it's this really beautiful moment in the film because we know he's been attracted to her, she's very different from his character, but he's enthralled by her and in this moment, her intuitive intelligence. She takes what he's doing to offer up an argument for her way of being.

Science uses the natural word and the scientific method, experiments based in the natural world that we can perceive with our 5 senses, or not even, gamma rays and stuff, but we can utilize things that are real and practical and tangible to come up with, [that are]  demonstrable and repeatable.

Here is a perfect example of a species that is limited and another species that can see above that there's way more to life than just what that limited species perceives. Who's to say that we're at the top of the totem pole? Who's to say that five senses is the limit? Obviously it's not. Scientists are arguing that cows have a sense that we don't have that is a magnetic sense, almost like a hammerhead [shark]-type sense that is not in humans at all. They're compasses; they know where north is naturally just because their brains are being pulled in that direction. That's exciting because that's beyond our sensorial, experiential, demonstrable, repeatable experience of life.

Within a love tragedy you are exploring these issues of not only our own modes of perception, but our own abilities to communicate. If we can't perceive this other element, we can't communicate.

MC: That's wonderful how you said it. It's articulating it. And that's what art does, we try and articulate the fucking inarticulable. The movies that I love the most are the ones that take those things that are rare, strange feelings that grab us, that are visceral and use the art form to convey it, to give it to somebody else.

Do you think your fans will be surprised by this character? It does seem quite different than others you have played

I look at cinema as an art form. I navigate myself through it as an art form, but there's a huge business attached to it. Mostly within the business, which is a huge entity that you can't pretend is not there, mostly people want to see what you've done before. They want you to do it again. Anything outside of that, they can't perceive or imagine.

A trigger did go off in my head when Mike asked me to play this character because it made me think that I knew I was capable of it and it also made me push people in the direction that I couldn't because then you could surprise them more, but the fact that he saw that I could do it, and right off the bat, didn't question it, it made me think that this guy is seeing things that most people aren't.

Which of course, is the central metaphor of the film...

Do you feel this content is inappropriate or infringes upon your rights? Click here to report it, or see our DMCA policy.
Mike CahillMichael PittSteven YeunAstrid Bergès-FrisbeyBrit MarlingDramaRomanceSci-Fi

More about I Origins