Durban 2014 Review: HARD TO GET Is Easy To Love 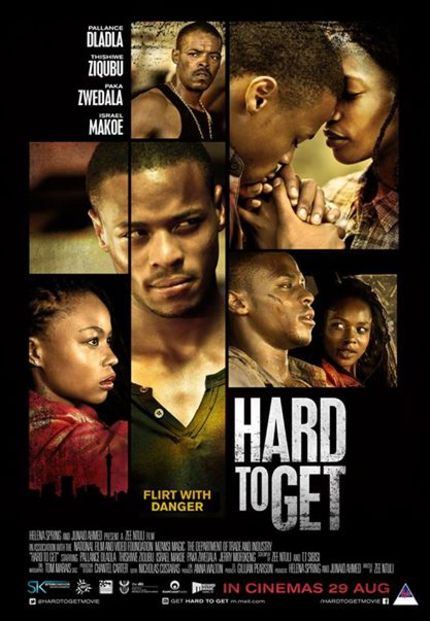 Over the past few years there has been an unmistakable sense that South Africa is a film nation on the rise and if that is, indeed, the case then its continued ascent will rest on the shoulders of bright young talents such as writer-director Zee Ntuli. At the tender of age of just 25 Ntuli's debut feature - the action-drama Hard To Get - got the nod as the opening night selection at the Durban International Film Festival and while it certainly shows some room for future growth it also shows a potent talent with an obvious gift for drawing performances from his actors and an uncommon ability to shift tones on a dime. In a post screening Q&A session Ntuli stated that a guiding principal for himself, his co-writer and his editor was to deliver Hard To Get as a non-stop roller coaster ride and full marks to them all for doing exactly that.

Young TK (Pallance Dladla in his first lead role) is a dangerous sort of charmer, a big fish in a small pond gifted with the sort of natural good looks and confidence that women fall all over themselves for and, oh yes, he knows it very well. Knows it so well that the time it will take to bed a new arrival at the township restaurant where he works has become a sporting proposition amongst the regular clientele.

But TK has no idea what he's walking into when he sets his sights on Skiets (the equally fresh faced Thishiwe Ziqubu), a beautiful young women who stumbles through the door one day while on the run from small level thugs. Skiets is the sort of challenge TK can't resist but to have a prayer he'll have to prove himself her equal in all ways, and that includes her disregard for the law, a scenario that quickly results in the pair fleeing town to escape the wrath of a charismatic local gangster (iNumber Number baddie Israel Makoe, gleefully chewing the scenery here) and putting themselves in the line of fire of a much bigger fish in the big city while their sexual power game develops into something more significant.

Ntuli and his young cast prove remarkably adept at shifting gears from moment to moment and scene to scene, deftly moving from high octane action to steamy romance to shocking violence and sly comedy in the blink of an eye and while there are certainly some of the growing pains that come with a debut feature from a young talent it's equally clear that Ntuli has a fabulous eye and rock solid instincts in all those desperately important intangible areas that simply can't be taught. Do I wish more was made of the inverted sexual politics at play here? Absolutely, there's a wealth of opportunity there untapped. Likewise the confidence to step back and give the characters a quiet moment or two to simply breath, to scatter the odd grace note here or there, would have added a great deal. But these are the sorts of things that come with time and experience and having had the opportunity to watch the film with a local audience and hear them react to the dialogue in their native language it is also very clear that there are additional layers to the film that simply don't come across in subtitles meaning that as much as outside eyes such as mine found to enjoy in the film - which was quite a lot - there's even more there for locals.

A hugely entertaining ride crafted with skill and gifted with a cadre of hugely charismatic performers put to great use, Hard To Get is an auspicious debut from a significant talent. Keep an eye on Ntuli. He's only going to get better and he's already pretty damn good.

Do you feel this content is inappropriate or infringes upon your rights? Click here to report it, or see our DMCA policy.
actiondurbanhard to getisrael makoepallance dladlareviewromancethishiwe ziqubuzee ntuli

More about Hard To Get