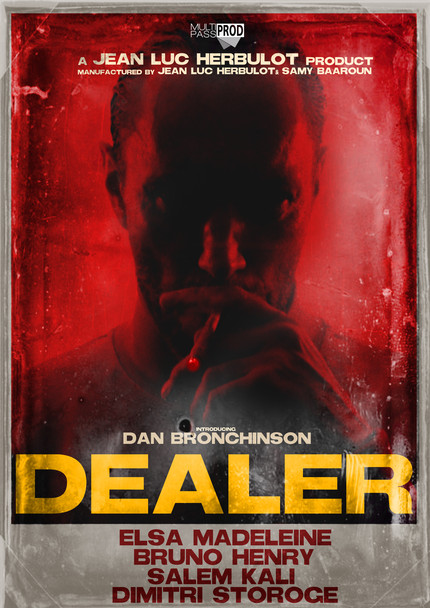 It was back in April that we first introduced readers to Jean Luc Herbulot and his stylish, low budget, French crime thriller Dealer and with the film set to have its world premiere today at the Fantasia Festival in Montreal international sales company WTFilms have announced that they are taking on the film to sell distribution rights around the world while also passing an exclusive clip our way. Read the full announcement below and find the clip below that!

Paris, France - Multipass Prod is proud to announce the world premiere at Fantasia of DEALER, a crime thriller directed by Jean Luc Herbulot. The screening of this first feature film starring a new generation of French talent will take place in Montreal on July 29th, 2014 at the DB Clarke Theatre.

DEALER tells the story of Dan (Dan Bronchinson) who, after giving up a life of cocaine trafficking, vows to stay on the straight and narrow. But he's offered one last deal to achieve his life dream, moving to Australia with his daughter. He accepts it and starts a downward spiral sucking him back into 24 hours of hell where he has to save his daughter and survive by any means.

Fantasia and Simon Laperrière, Programmer of the Camera Lucida section, describe DEALER as "a sturdy thriller directed with volcanic energy that drags its audience full-steam ahead through a Parisian underbelly filled with hoods and thugs, marking the powerful arrival of one of the most promising new voices in French genre cinema (...) a feature-film baptism filled with noise and fury."

"I wanted to explore the energy of despair. When the odds are against you and there is no way out but you still have to fight", explains director/writer/editor Jean Luc Herbulot, who is represented by William Morris Entertainment (WME). "I also wanted to show how one life can change in a day with one action. The dreams you thought were accessible become inaccessible and your allies become your worst enemies".

Due to the unusual subject matter, DEALER was completed outside of the French production system for a very low budget. "I knew we had to do the film that way. It was the language of the film. Dan's life was like that. A sequence of shit hitting the fan," says Jean Luc Herbulot. "Each film has its own configuration, and it was the right one for the film. We would have had 300,000€ more, it may have ruined the spirit of the film."

A film loosely inspired by the life of the lead actor/producer Dan Bronchinson, DEALER is already a landmark in France as it's the first local film depicting the life of a drug dealer. Co-written by Jean Luc Herbulot and Samy Baroon, the film features a new generation of actors: Dan Bronchinson (Dan), Elsa Madeleine (Chris), Salem Kali (Salem), Bruno Henry (Delo) and Dimitri Storoge (Soupape).

Fueled by a fast-paced style of editing and directing, DEALER is a gritty depiction of the drug-trafficking lifestyle without unnecessary glamorization. "We wanted to show that drugs are far from the best path to a dream journey - and Dan's character is there to show it to the audience," explains Dan Bronchinson. "There are no praises, no bling bling. It's really a descent into hell, and the dark truth of a life in drugs."

DEALER is produced by Dan Bronchinson of Multipass Prod in co-production with Jean Mach of Mad Films- Mi. Paris-based and genre specialist WTFilms has joined the project to handle foreign sales. "It's been a while we have been looking for a gritty crime film. We're big fans of British and Scandi gangster movies and Dealer really represents this new wave of filmmakers and this new school of criminals", says Dimitri Stephanides, Managing Director of WTFilms. Partner Gregory Chambet adds: "French cinema has a strong history of great crime movies, but recently those have been very scarce except the movies of Olivier Marchal or Sleepless Night. Jean-Luc Herbulot and Dan Bronchinson have created a kinetic and realistic tale that doesn't forget to be entertaining. It is highly believable and gripping".

Dimitri Stephanides and Gregory Chambet have a long history of selling comparable gangster films from their previous experiences in companies such as TF1 International where they worked on Crime Insiders, Inside Ring, Paris By Night, In the Electric Mist, and Romanzo Criminale.