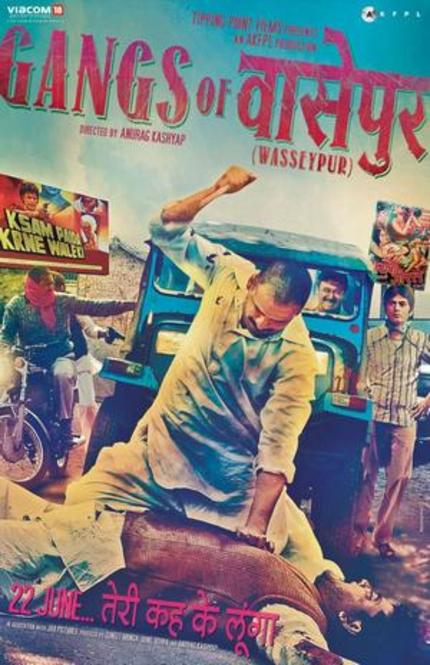 Hell has apparently frozen over because Anurag Kashyap's epic crime story, Gangs of Wasseypur, finally has North American distribution.
Gangs of Wasseypur, a five and a half hour cinematic experience that is gripping like few films I've ever seen, debuted in the Director's Fortnight section of the Cannes Film Festival back in May of 2012, where it received rave reviews. The film was immediately split in half and released in two parts in India and parts of the Middle East in June and August of that same year, while concurrently enjoying a successful festival run around the world.

Wasseypur has had a rocky path to distribution in the US. While the film played, both in its long and split forms at TIFF 2012, as well as appearances of Part 1 at the New York Indian Film Festival and Los Angeles Indian Film Festival shortly thereafter, it didn't seem to make an impression on acquisitions execs in the US. The film subsequently went on to limited theatrical release in France and the UK. I had lost all hope of the film making it to the US in any form, and even the first quarter 2013 release in the UK didn't provide any kind of home video release that I could cling to as consolation.

Variety reports that upstart distributor Cinelicious has picked up the North American theatrical rights to Gangs of Wasseypur with The Grey and Lone Survivor producer Adi Shankar presenting. I've heard from my seat near the curtains for this film that it's been a difficult get, reports of ambitious pricing seem to have scared away many of the usual suspects for NA genre films, and have even kept them film out of several major Stateside film festivals. Which leads me to believe that either Cinelicious is betting big on this one, their most visible acquisition to date, or that the sales agents have finally realized that their time to make a buck is quickly slipping away. In either case, Americans will finally get to see what all the fuss is about, and I'm excited!

No solid plans have been announced, but we expect that Cinelicious will hit theaters with the film before too long. Check out the trailer and mountains of coverage below;
Tweet Post Submit