The sun strikes the great green Carpathian mountains, if only in a teasing way, as clouds and rain showers begin to roll in. However, this weather does not stop the city of Cluj-Napoca from transforming itself into a hub for a diverse variety of films from all over the world, as well as the crossroad for the domestic film industry. The city is pulsating with cinema. The Transylvania International Film Festival has started.

The giant inflatable screen is pitched right in the middle of the main square to bring the films closer to the general public during evening screenings where they can enjoy them after the workday is over. That´s a nice gesture to locals. The organizers of the festival have gone a little farther too, showing the initiative to save and reconstitute small town cinemas in the campaign Save the Big Screen. The multiplexes are not a part of the festival. Films are being screened in small cinemas or alternative spaces such as the university or military center. The festival has even started a campaign to turn the derelict film warehouses, buried under the avalanche of old film stock, into a cultural center, which may become the first Romanian film museum.

The domestic production keeps up the rhythm on the other end by spitting out new features. The new teen comedy #Selfie, the debut of Cristina Iacob, reached the threshold of 50 000 admissions in the two weeks even before the festival started. That´s good buzz for a first feature and a teen comedy. Though the synopsis sounds a tad familiar:

Instead of staying home and learning for their finals, three soon-to-be college graduates decide to go to the seaside and end their teenage years with a BANG! Yasmine, Roxi and Ana are determined to have fun and forget about all responsibilities just two days before the final exam and that means breaking every rule and doing everything they want without thinking about the consequences. They're looking for freedom, adrenaline, summer love and the three young men with whom they hook up seem to be willing to provide all the girls need.

Nae Caranfil, a figure often referred to as a filmmaker of the real Romania, allegedly unlike the New Wave, screens his long awaited English-language return behind camera, Closer to Moon. With Vera Farmiga, Mark Strong and Harry Lloyd the film tells the story of Four men and a woman, all high ranking members of the Communist Party, who are arrested, tried and convicted for an attempted heist. While waiting execution, they are forced to star in a propaganda film about the heist. Surely an ambitious stab at the heist genre.

In addition,the Romanina Section sidebar is set to open today. The Crypt promises an interesting story:

Leduc, a French real estate developer, prepares an old Romanian thermal resort for renovation. A Roman fresco in a crypt delays the project, so he tries to burn it down. But he locks himself in a courtyard by mistake. He stays trapped for days, the neighbourhood being deserted. He tries communicating with the few remaining residents and changes from a civilized being to a beast. Will he ever leave the courtyard?

I'm an Old Communist Hag promises laughs in what seems to be a bit more mainstream fare led by the dame of Romanian New Wave, Luminiţa Gheorghiu:

The story of Emilia, a 60-year old woman who lives peacefully with her husband Ţucu in a small Romanian town. The couple is overwhelmed with joy when they receive a phone call from Canada: their daughter Alice will visit them together with her American fiancé Alan. Things could not be better for Emilia, who looks forward to basking in the young couple's happiness. Moreover, Emilia, who is famous in the neighbourhood for her communist nostalgia, is asked to be part of a documentary about the extensive festivities organized on August 23.

So today I'd like to look at a few of the fest's other offerings. Click to the right of the beautiful main square to check out the full gallery of mini-reviews, featuring the Turkish-Japanese co-production The Human, dark Serbian comedy The Priest's Children, and a ScreenAnarchy favorite, the Irish comedy The Stag (aka The Bachelor Weekend) 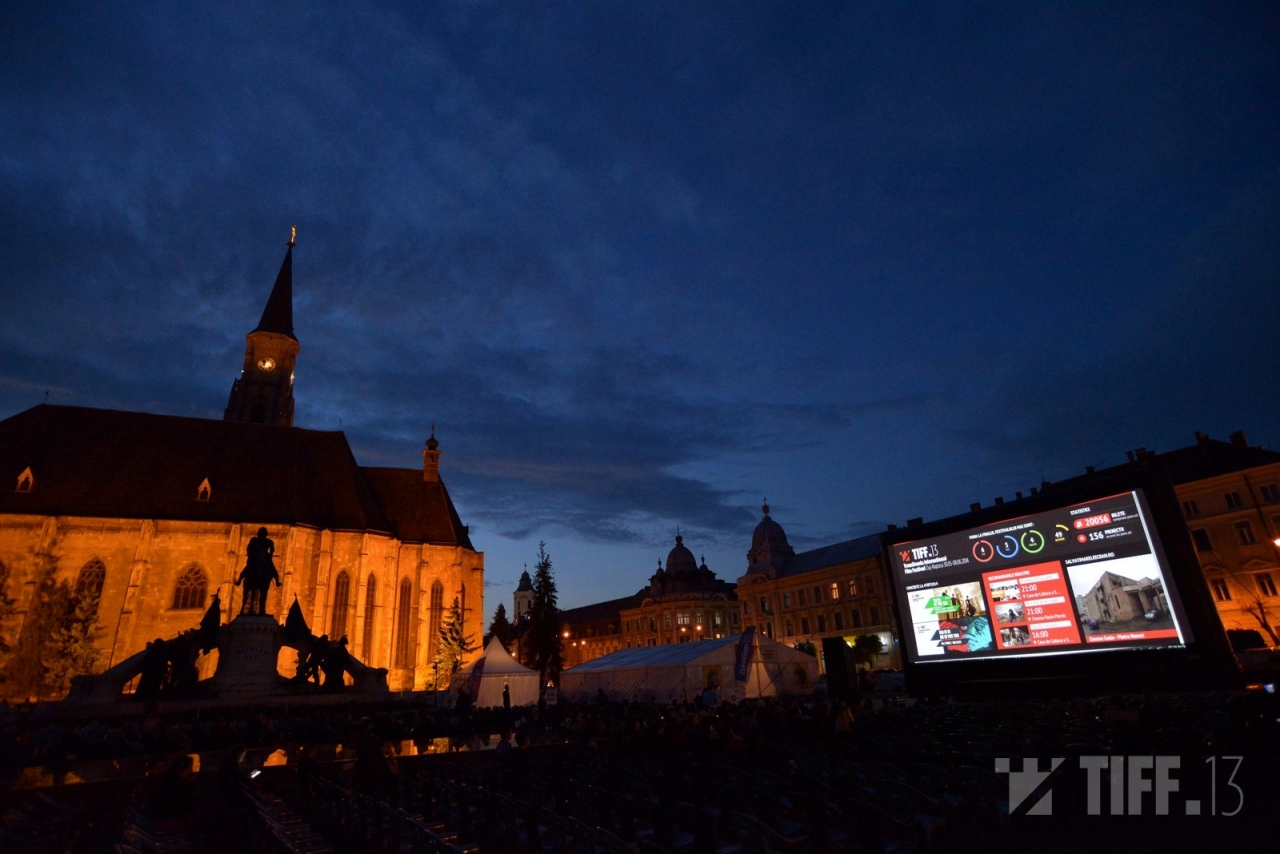 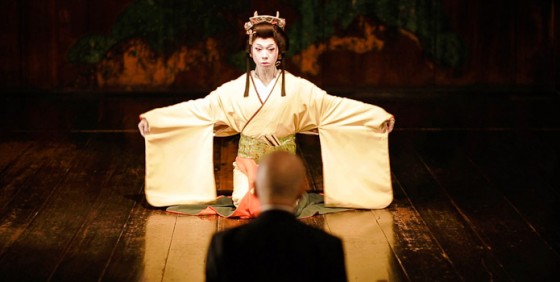 The Human is an unlikely Turkish-Japanese co-production, directed by Guillaume Giovanetti and Cagla Zencirci.

It begins with a myth about a fox and a racoon seeing a Human burying a bag of gold. Both of them bet who can get the human´s wealth. They both transform into humans and begin the race. Despite the competitive premise, The Human is a slow burning contemplation on the ages old theme of wealth vs relationship. The opening scene invites us into the life of an elderly CEO bathing in incandescent neon lights in a strip bar where an anonymous stripper takes bank notes from his fly. With her mouth, naturally. Meanwhile his company is sinking and he can´t stand the pressure of leaving 300 people he employs without a livelihood.

The script is wisely divided in three parts : The Human, The Fox and The Racoon. The filmmakers designed the main story line as a conundrum to decipher which one of the protagonists is what figure. While it undoubtedly adds certain suspense to the viewing experience, the film develops into a morality tale on real values in a wealth driven society. Furthermore, the Greek myth of Orpheus and Eurydice are replaced by animals from Japanese folktale but the concept remains the same: to the Underworld and back again through wisdom acquired in an imminent financial and mental bankrupt.

The Human plays out as defense of femininity by painting out males as the corruptible and weaker sex. It prompts (male) viewers to appreciate what women are capable doing for them, though it sometimes skids into more of a feminist cry for appreciation of the commonality. While the film tries to bring universal (current) themes and to deliver a revelation, the story loses its breath after the promising opening. The filmmakers have talent and potential, so it´s a bit disappointing that the film winds up as an instruction video for elderly couples in a crisis. 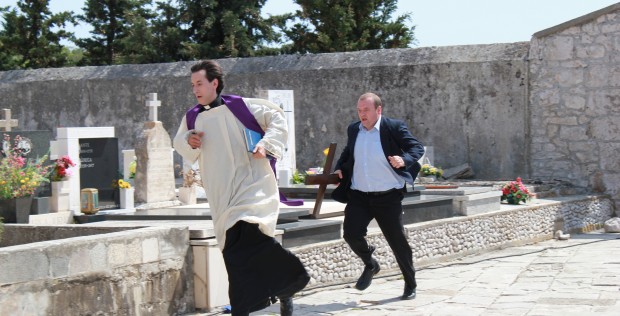 The hilarious "single shot" dark comedy from Serbia, The Death of a Man in the Balkans, was enough to tempt me into viewing the Croatian-Serbian co-production with an equally provocative title, The Priest´s Children.

While the Christian church is regularly on the whipping post and with Riad Sattouf´s Jacky in the Kingdom of Women setting the bar of religious satire unexpectedly high, there was a shadow of doubt how on well this supposedly light-hearted folk comedy would turn out.

The story: A young priest has problems of getting the local parishioners of a picturesque Dalmatian island to confide in him as he does not stand up against their elderly and overly popular priest he is helping. As the mortality on the island exceeds the birth rate, the young priest comes up with a scheme where everybody should be a winner. The scenario of condoms and needles bears its fruits soon enough while it also launches a carrousel of unlikely and peculiar events.

The theatrical aspects of the film grow more and more visible as it clucks along, mostly through the dialogue and character dynamics. The characters are obviously based on various archetypes mostly based on their social and professional roles. The initial comic take slowly transforms into farce, only to break the cocoon, and piles up gags on the verge of third act, finally embrace tragedy.

Despite several parts where it seems that the director and screenwriter did not take the film seriously, and wallowed in mediocrity, the inundating somber note drowns the harsh finale. The scenario of gently inverting the obvious sex comedy and crowd pleaser into a shocker pays off. Nevertheless, the story is more suited for the stage where subtlety would make it a more intensive and thrilling experience. 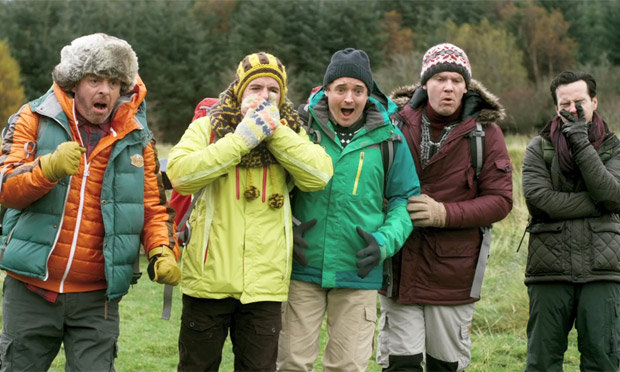 An Irish stab on the bromance genre, The Stag, revolves around closeted metrosexual Fionnan who is about to get married to his longtime girlfriend Ruth. When even the wedding organizer is surprised by Fionnan´s full-on involvement in the wedding preparations, Ruth decides to brace up his masculine side. She thinks the best man ought to organize a stag. Ruth insists on inviting her brother, known only as The Machine (played by the screenwriter Peter McDonald). And The Machine is not the usual ingredient an uptight gang of friends would need.

The Machine is the driving force of the comedy, as his carelessness and social incompatibility with the others prompst many unusual situations, so unusual the gang ends up butt-naked while lost in the dark and chilly forest. The bonding with soon to be brother-in-law unfolds as a sort of psychotherapy session where the oddball´s reckless behaviour confronts the group's neurosis.

Notwithstanding that The Stag delivers funny punchlines (mostly by The Machine), the film borrows a lot from homosocial themed comedies and several sitcoms creating a patchwork of known figures and situations. The prototypes include the incessant seducer, unable to start a relationship because the one girl he loved broke his heart, the xanax-doped businessman drowned in materialism, the oversensitive groom to be... These stereotypes of modern men are used as opposition to the masculine archetype of the hunter aiming to idolize the savageness of the careless The Machine.

Due to this formulaic nature and heavy use of know sitcom tropes, the feature film format feels a bit unsuited for this story overall. Otherwise, The Stag is a decent comedy, which we are so lacking these days.