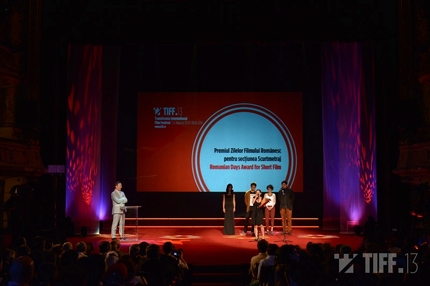 Though the Transylvania region is mostly known for a certain pop culture figure, who was one of the two PR faces for this year´s edition -- the other being the world´s most known savior -- the film festival itself in Cluj is putting the region back on the culture map. Many guests complimented the warm, informal and hospitable atmosphere the festival is rapidly becoming  known for. Still Life director Uberto Pasolini even decreed that he would like to find a wife here, whereas Hungarian director Janos Szasz even confessed during the closing ceremony that he called his wife, telling her that he doesn´t want to come home. Despite such a rush and buzz from industry events and screenings, an amicable atmosphere prevailed.
The 13th edition boasted a strong competition of first and second features feeding to an aura of prestige from being selected from such a huge amount of submissions. The variety of emerging filmmakers was an all around showcase of talent, personal voice, and most of all the will to make films despite the fact it´s not as simple as it might look. Maximon Monihan's  ambitious debut, the modern silent film The Voice of the Voiceless is just one of the many examples.
The closing gala ceremony was hosted by Tudor Giurgiu, director of the fest, with several lovely faces handing out the awards. Debra Winger was endowed with The Lifetime Achievement Award that night by Cristina Flutur, a member of the main competition jury whose striking performance in Mungiu´s film Beyond the Hills brought her the Best Actress award in Cannes in 2012.

The audience's award went to Pasolini's slightly darkly ode on humanity, Still Life, emphasized by the performance of Eddie Marsdan who was a hot candidate for The Best Performance Award. However, that went to Spanish duo Javier Pereira and Aura Garrido for their acting in an unconventional contemplation about love, Stockholm.

The jury of international critics FIPRESCI award went to the dark Irish comedy Calvary, featuring burning churches and drinking priests.  It is not entirely a return to good ol´ Craggy Island, but star Brendan Gleason and director John Michael McDonagh know their trade as they already proved in The Guard.
The special mention of the main competition jury, complimenting the arduous nature of filmmaking performed under not exactly easy conditions, to Iranian Paat and albino-hunting themed White Shadow. Viktoria, the story of unwanted motherhood under the Communist regime in Bulgaria, and the subsequent child of the decade attended with the highest care not by parent but the leader of the red party, snatched the Special Jury Award.
The main award went to Rodrigo Sorogoyen, the Spanish director of Stockholm. Sorogoyen wasn´t not the only one surprised in the hall as the rumors from previous days had not ever mentioned Stockholm as a possible contender. Tomasz Wasilewski, the young Polish director of Floating Skyscrapers received The Directing Award. Quite a few original, bold and daring films were not appraised on the stage in Cluj, namely The Voice of the Voiceless, Iranian Fish & Cat and the Norwegian Blind. Fortunately, a healthy festival life is still before them so they might as well be able to scoop up some prizes in other corners of the world.
My reviews of The Voice of the Voiceless, Fish & Cat, Viktoria, The Floating Skyscrapers, The White Shadow and Still Life can be found here. Stay tuned in the coming days for my look at the selection of Romanian films that were featured during the fest.
Tweet Post Submit

Do you feel this content is inappropriate or infringes upon your rights? Click here to report it, or see our DMCA policy.
calvaryfilm festivalfish & catfloating skyscraperspaatstockholmthe voice of the voicelesstransylvania international film festival