A dreamy atmosphere is established early in William Eubank's sophomore feature The Signal, holding the promise that the story could go, literally, anywhere.

It's a haunting, lonely, moody, deliberately-paced atmosphere that's reminiscent of Eubank's debut, Love, which was set aboard the International Space Station. Initially, The Signal follows three young friends traveling across the U.S.; the open landscapes remind that the countryside between cities is often as empty of people as outer space itself.

Nic (Brenton Thwaites), his girlfriend Haley (Olvia Cooke), and his best friend Jonah (Beau Knapp) enjoy an easy comfort on the long trip, yet there's a sense of disquiet between Nic and Haley. She's moving away for a year, and her decision has edged her relationship with Nic to the breaking point. Another friction point is revealed when Nic receives a text message from a hacker known as Nomad; it seems that Nomad broke into computer servers at MIT, and his actions created issues for Nic and Jonah.

Motivated by a desire to confront Nomad, Nic and Jonah take a detour in Nevada and end up at an apparently abandoned house in the middle of the desert in the dead of night. Naturally, that does not deter them. Leaving Haley in the car, they head inside to investigate further. 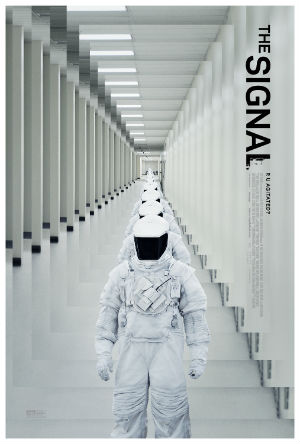 From that point on, their lives are never the same. For one thing, Nic is separated from his friends. For another, haz-mat suited Damon (Laurence Fishburne) enters the picture, deepening the mystery. Beyond that, however, the mystery deserves to be considered on its own merits within the context of the film as a whole, not broken down, piece by piece, in writing.

Without spoiling any further plot points, however, what should emerge after the hazy, pleasantly vague opening sequences is something that will propel the movie forward. As examples: in a conventional murder mystery, the detective needs to find clues; in a character study, layers of personality should be unpeeled; in an adventure, new locations or cultures are explored.

Much like Eubank's Love, what emerges instead are quiet, carefully-crafted, extravagant set-pieces that are visually attractive but narratively unsatisfying, especially in the moment of their occurence. As the pace flags, no other element steps up as compensation. Nic's character, who dominates the screentime, is as thin as a baking sheet, so it doesn't take long to grasp his essence, and no one else merits more than an occasional glimpse in the background. It doesn't take much to satisfy Nic about his circumstances; all he wants to do is see Haley and get "out," which for him means absolutely anywhere else.

More than anything else, The Signal is a mystery, and perhaps if I was more of a mystery buff I'd be more satisfied with how the film plays out. As it is, I was left impressed by the effort but frustrated by the flaccid execution and eyebrow-raising resolution.

The film opens in New York, Los Angeles, Chicago, Dallas, Philadelphia, San Francisco, and 22 other cities across the U.S. on Friday, June 13, before expanding nationwide in the following weeks via Focus Features. Visit the official site for more information.

Do you feel this content is inappropriate or infringes upon your rights? Click here to report it, or see our DMCA policy.
Brenton ThwaiteLaurence FishburneOlivia CookeWilliam Eubanks

More about The Signal