Now On Blu-ray: BLACK OUT Continues To Sparkle Like A Dirty Diamond 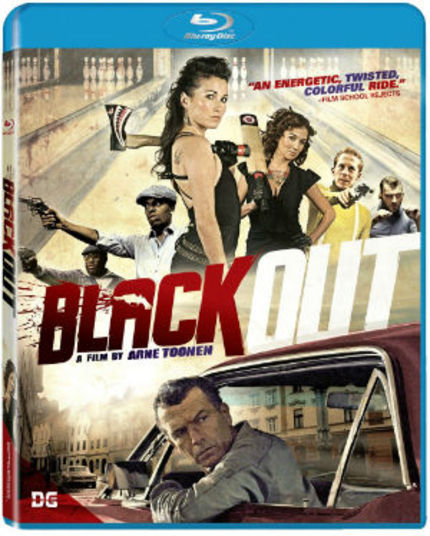 Arne Toonen's Black Out holds up as a darkly comic crime movie. And I'm not saying that just because I'm quoted on the back cover of the new Region A Blu-ray from Doppelganger Releasing.

In the blitzkrieg of films I saw at Fantastic Fest in September 2012, Black Out was not the only one that lodged in my memory, but its rambunctious, irreverent spirit helped distinguish it. A recent viewing on Blu-ray confirmed my initial impression:

It's very tempting to describe Arne Toonen's Black Out as The Hangover with bullets and blood, but that would be inaccurate, because the Dutch film adds a layer of self-aware mockery and introduces a roster of aggressively colorful characters to an age-old plot. ...

While none of the narrative beats are strikingly original, the screenplay by Melle Runderkamp and Toonen takes care to shine them up and rearrange them, one note at a time, until they resemble a new composition. It's as though they cooked the same old meatloaf with sparkling new ingredients. ...

Circling back around to the opening scenes, it's a particular moment in Jos' disposal of the body that 'clicks' and locks the movie into a distinctive mode, one with a pungent sense of humor that winks and says, 'Let's go!,' making Black Out a convivial pleasure to watch.

Raymond Thierry stars as Joe, a reformed bad boy who wakes up on his wedding day to discover a bloody corpse in his bed. The film zooms off from there in a very entertaining fashion.

The Blu-ray features an audio commentary by Toonen, who exudes a similar breezy confidence and refreshing candor as his characters. With delightfully little dead air, he has something to say about every scene, not only the real-life location of settings and the identification and background of the actors -- very helpful to those of us not familiar with the Dutch cultural scene -- but also a quick explanation of his approach.

As he (constantly) reminds the listener, he and his team were working with a very small budget, and, while he acknowledges the limitations that imposed, and laments the scenes they were not able to shoot, he also shares the creative thinking involved in overcoming those limitations so as to make the film as visually interesting and emotionally impactful as possible. It also serves as a "how to" for those who want to add comic touches to an otherwise straight-ahead genre exercise.

Many audio commentaries have put me to sleep, but not this one. The Blu-ray also includes Oh Deer, a short film by Toonen, a blooper reel, a gallery of photos ("Unusual Suspects"), and a selection of trailers for Doppelganger Releasing titles. On my admittedly less than top of the line home video equipment, the picture and sound are very good, and the English subtitles are well-timed and easy to read.

The film is also now available on DVD.

More about Black Out