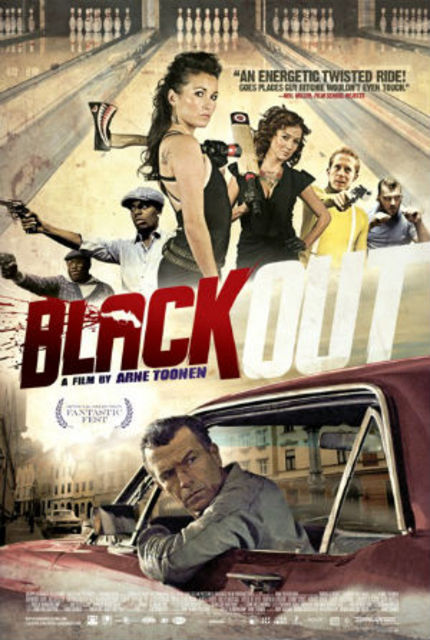 The U.S. will soon experience a black out, and that's a very good thing. Arne Toonen's Black Out is a darkly comic Dutch film that quickly asserts its own personality in a smart and jolting manner.


On the morning before his wedding, retired criminal Jos (Raymond Thiry) wakes up next to a murdered man with no memory of the previous night or how he and the body got there. Jos soon discovers that a group of gangsters have pinned him as the lone suspect in the theft of 20 kilos of cocaine...and he's got 24 hours to get it back, or the life of his bride will be in serious danger. Now Jos has no choice but to creep back into his dangerous former world of nasty thieves and violent drug dealers--all before his wedding the next day!

Raymond Thirry gives an excellent performance as Jos, the groom-to-be, who, as it turns out, is only slightly fazed by the situation. The film screened at Fantastic Fest in September 2012; in my review, I wrote in part:


It's very tempting to describe Arne Toonen's Black Out as The Hangover with bullets and blood, but that would be inaccurate, because the Dutch film adds a layer of self-aware mockery and introduces a roster of aggressively colorful characters to an age-old plot. ...

While none of the narrative beats are strikingly original, the screenplay by Melle Runderkamp and Toonen takes care to shine them up and rearrange them, one note at a time, until they resemble a new composition. It's as though they cooked the same old meatloaf with sparkling new ingredients. ...

Circling back around to the opening scenes, it's a particular moment in Jos' disposal of the body that 'clicks' and locks the movie into a distinctive mode, one with a pungent sense of humor that winks and says, 'Let's go!,' making Black Out a convivial pleasure to watch.

Courtesy of Doppelgänger Releasing, Black Out will open in select theaters in the U.S. on February 21, which is the same day it will be available to watch via various Video On Demand platforms. We are pleased to present a new poster and a revised trailer. Recommended!

More about Black Out