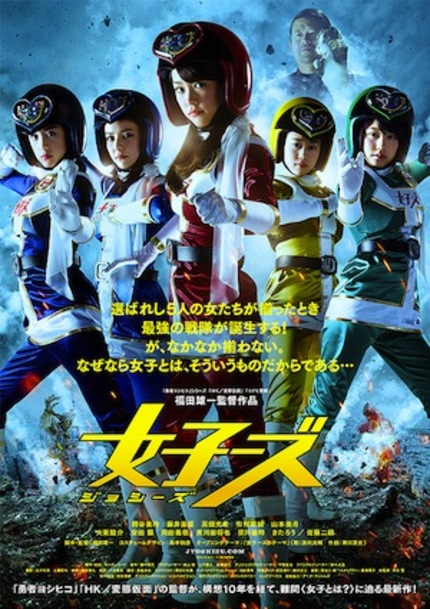 Fukuda's family (and arguably feminist) friendly send-up of Super Sentai TV Shows (for us Westerners that'd be the dozen or so versions of Power Rangers), Jossy's (aka Joshi Zu), seemingly follows the same one-joke formula as his last two films. Here we have five young women from vastly different backgrounds who come together to fight the marauding phantom monsters who threaten the planet with absolute destruction. Or so Charles, their stuttering boss who only appears as a hologram projection, says. The lack of back story plays right into the genre Fukuda is taking such delight in plundering from. Each "Angel Of Justice" was picked because they have a color in their surname: Red, Yellow, Green, Navy and Blue.

Fukuda hits every possible trope imaginable in the genre, with the film's comically low budget  a major benefit towards its goodwill. Fights always happen in the same abandoned quarry. The Phantoms are humanoid rubber monsters with names like Stink Bug or Metal Gordon; their leotard wearing henchmen in tow. The members of Jossy's do their flashy intro, announcing their colors with Karate-esque posing. The group has their secret, and most powerful weapon, the Jossy's Tornado, which can only be executed when all five of them are together.

Some of the film's best moments come when characters argue with the logic of the universe they exist in. They think that using Febreze's "downy freshness" will defeat a foul smelling foe. Navy says it's lame that there is both a Navy and Blue on the team, so she'd rather be beige. They all chastise Charles for not paying them at least an hourly wage, then ask if they can change the name to something less cute.

The main conflict of the piece comes with Red, the overly serious leader of the group and a rising star in the sales department at a construction firm. When she abandons her teammates for an important presentation, Red must atone for her mistake, and gather the team for their greatest battle yet. On this end, the film begins to unravel something of a social commentary about Japanese women in the work force. Most of the men in the film are either incoherent slobs, sleazy creeps or inept bosses who get others to do the work. The women, though they squabble with each other and talk about which actors are cute, come off as the stronger sex. In this way there are traces of a feminist message present in the film, albeit in a sort-of archaic working girl fashion.

The big question of course is, "is the film sustainably funny?" And my answer is: Not really. This is my first feature experience by Fukuda, and while his previous one-joke flicks seemed to work wonders with my colleagues, Jossy's more often than not just stalls thanks to its repetitious gags. While the film certainly finds pleasure in sending up the eye-rolling monotony of the genre, it well... becomes quite monotonous itself in doing so. Fukuda, more often than not, takes the most glee in jokes that involve a lot of standing around and waiting. Whether that's Jossy's taking an escalator, catching the subway (where a gawky guy rudely teases them about where the pink member of the team is), or the film's main running gag when the team have to politely ask the phantoms they are fighting to wait a moment, as a member is running late to battle. These gags are indeed funny at first, but get very old, very fast. If I were to take out the ol' laugh-o-meter I'd say the film gets consistent chuckles, and many titters and snickers. There's most certainly a level of nuance lost on non-Japanese speakers, but the material is also broad enough to where that really shouldn't play too much of a factor in the goodwill one does or doesn't have for the film.

If your expectations for Jossy's are to have a good and playful time, then you won't be disappointed... at least for some of its 97 minute running time. The more you're into the Super Sentai genre will certainly help gauge that enjoyment too, and Fukuda is a bizarre enough duck that fans of irreverent humor should also take a liking (especially to Charles and his cat/ferret puppet). But as it is, we get everything that is clever about the film right there in the trailer.

Do you feel this content is inappropriate or infringes upon your rights? Click here to report it, or see our DMCA policy.
fukuda yuichijoshi zujossy'sLA Film FestivalLAFFpower rangerssuper sentai