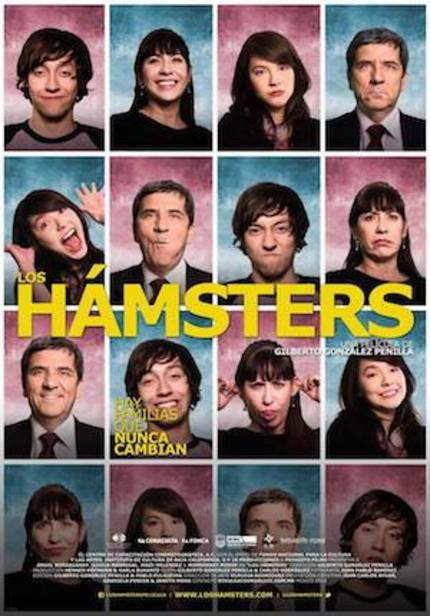 The Hamsters (Los Hámsters) is the thesis film of CCC student Gilberto González Penilla. Right from the beginning, you understand what the director is trying to achieve with it, as he makes you look at an average Mexican family during the first moments of a normal weekday. The father goes to work, the teenage son gets into a harmless morning fight with his sister, and the mother prepares the breakfast.

Everything seems to be normal but we (the audience) get to see certain details that clearly indicate the contrary (i.e. the son steals some money from his mom). For the next 70 minutes, the movie will expose the reality of each member of the family, by following them for a complete day.

Therefore, it lacks a major plot, rather focusing on everyday kind of moments. Still, the central themes are easy to identify. On one hand, there's the crisis of the married couple; the dad is actually unemployed and money problems are now quite real, while the mother is dissatisfied as the physical beauty of her youth is fading away. And on the other, we have the teenagers facing troubles that are typical of, well, teenagers! It wouldn't be a surprise if you connect in one way or another with these characters. Personally, I did, with some scenes reminding me of my own teenage days.

Set in the Tijuana, the movie is more a reflection of our time than of the city itself, even with a hint of how reclusive we are right now thanks to technology (social networking and cell phones, in particular). The Hamsters is both real and funny, staying on the bright side of things but nevertheless pointing out serious issues. Is it amusing to watch the 50-year-old father next to two modern tablet users, while the three wait for a job interview? Sure, quite amusing frankly, and that's the way the movie is meant to work. However, the hard situation of the middle-aged man not finding work opportunities (entirely because of the age) is also there.

The interaction between the actors gives the film a very natural tone; Hoze Meléndez, for example, offers an effortlessly fun performance as the son. Being a movie based on little moments, the actors seems to be more free to bring in some improvisation, but at the same time, The Hamsters is wisely structured. While certain bits might be a little cartoonish, for the extra laugh, the smart writing makes for a greatly effective conclusion.

We get to know every member of this Mexican family quite well, yet by the end of the film, they don't really know each other. "You're so immature", says the girl to her brother, but the audience know everyone here is like that, no matter if they are teenagers or adults. After all, The Hamsters defines a dysfunctional family, and it does it in a very accessible way.

The Hamsters will screen again at Distrital on Sunday, June 8.

Do you feel this content is inappropriate or infringes upon your rights? Click here to report it, or see our DMCA policy.
DistritalDistrital 2014Giberto Gonzalez PenillaLos HamstersMexican CinemaThe Hamsters

Fantastic Fest 2021 Review: LET THE WRONG ONE IN Let's Audience in On Joke

New York 2021 Review: THE SOUVENIR PART II, Portrait of the Artist as a Young Woman