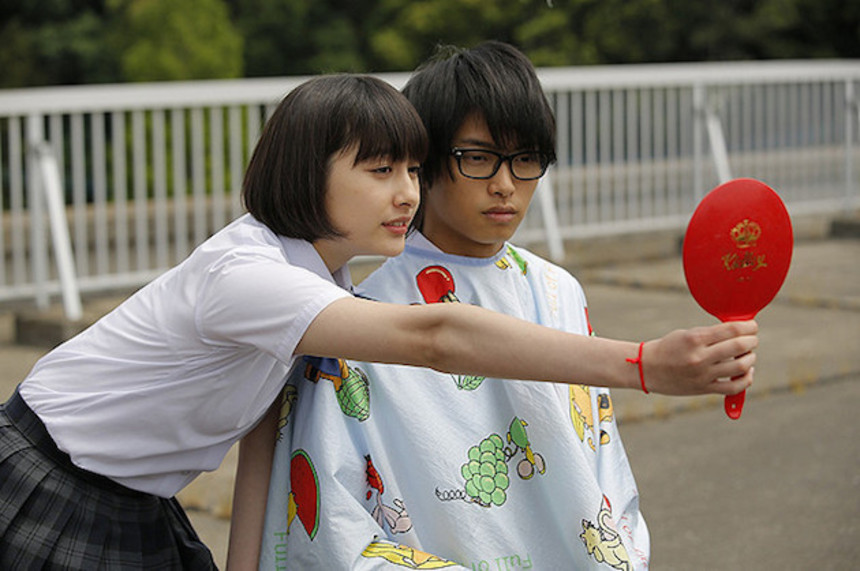 Known for his great contributions to the world of Japanese commercials, Yakumo Saiji has finally decided to venture into feature-length filmmaking, and for the world premiere of his debut, he chose the Udine Far East Film Festival. Seeing that the huge cinema was nearly jam-packed with anxious audience members, his decision couldn't have been more perfect.
Based on Nakata Eicihi's 2003 popular teen novel, My Pretend Girlfriend (Momose, Kocchi wo Muite) unfurls a relatively simple yet incredibly moving tale of first love, first heartbreaks, and all the raw feelings that inevitably come with such life changing experiences. Beloved by various audiences, high school-set stories obviously hold a special place in Japanese pop culture, but they often tend to be either too lovey-dovey for some tastes, or just plain whimsical when dealing with significant heart-related topics. As a result, a lighthearted approach might eventually overshadow the important themes pondered in a romantic storyline.
A visible standout in its genre, My Pretend Girlfriend offers a highly lyrical and poignant depiction of love and its many variations as experienced from a few contrasting angles. Trapped in a destructively emotional vortex, two boys and two girls gradually come to terms with their own feelings, but the lies and hypocrisy that surrounds all their expectations and decisions reveal a sort of vicious circle of love and destruction.
And yet, Yakumo approaches the seemingly weighty material with enough warmth, dedication and tranquility to weave a meaningful story that will definitely resonate with young people who have not yet actually experienced similar sensations.
Fifteen years after graduating high school, Noboru (Takeuchi Taro) returns to his hometown, a place that inevitably brings back memories of a tumultuous yet unquestionably influential period of his teenage life. A chance encounter with an old friend allows for subsequent flashbacks, revealing a story that had a huge impact, not only on his personality, but also on his career as a novelist.
A typical nerd both when it came to looks and behavior, Noboru accidentally became the talk of the school because of a relationship that was never meant to be. In order to hide an illicit affair that could destroy his reputation, teen heartthrob Miyazaki (Kudo Asuka) openly asks Noboru to pretend that he's dating Momose (Hayami Akari), his secret girlfriend, before the rumors of him being a worthless two-timer start spreading around school.
Addressing Miyazaki as the "savior of his life," Noboru gladly complies, but an initially harmless agreement soon takes its toll on the two fake lovers, whereas Miyazaki goes back to dating Tetsuko (Ishibashi Anna) without a care in the world.
Though unconditionally in love with Miyazaki, Momose is forced to suppress all her emotions and wait for that day when the dream boy will finally break up with his "other" girl. She tries to cheer herself up with ridiculous logic, like when she refers to a cheesy study, which apparently shows that 45% of couples separate after two years. In one of the few straightforwardly comical scenes, Noboru offers a biting reply: "But it means that 55% don't, right?"
Initially a tough and critical girl who doesn't beat around the bush, Momose eventually opens up and shares even her most personal feelings with Noboru. It's quite predictable that the geeky and inexperienced boy starts falling for Momose, even if her attitude towards the whole exhausting farce might be a bit of a turn off.
Strange though it may seem, for Noboru that fake relationship serves as an enormously valuable lesson in love and life. Momose, on the other hand, realizes that desperate attempts at becoming close with the absentee boyfriend are generally worthless. And even if the perky Miyazaki seems to be in control of the situation, moral dilemmas hide behind his overly cheerful smile. Nevertheless, he's still only a second-grade victim of his own silly game.
My Pretend Girlfriend finds an unlikely star in Hayami, who left a successful career as an idol in the popular J-pop group Momoiro Clover to try her luck in the film world. Possibly in her breakthrough performance, Hayami passionately contradicts the negative perception of pop-singers-cum-actresses, putting some of her less talented colleagues to shame. Although the film outlines some of Momose's shortcomings, it still clearly sympathizes with her. Hayami recognizes the advantage and entrusts her character with an impressive palette of emotions.
Cinematography is beautiful and mostly sunny, but some classical compositions heard during the few revealing night scenes enhance the film's gently somber ambiance. What's fascinating is that every flashback brings another significant storm of differing emotional potency, sequentially exposing the vulnerability of all the characters. The climax comes with the day of a bizarrely awkward double date, and its most evocative sequence sees Momose practically giving up hope. Crucial to understanding her character is the expression on her face, a forceful but warm gesture towards Noboru, and the fact that she calmly allows for Miyazaki and Tetsuo to enter a cinema auditorium on their own.
Her staying behind illustrates a transition and, although she's still suspended somewhere between love and hate for her "senpai," this event forces her to wake up from a long and unfulfilled dream. First love, as Momose's example perfectly shows, can be either beautiful or tragic. To look for something in between might be an impossibly tough task.
Sign-In to Vote
Tweet 0 Submit

I really don't understand the ending :'( hate it.

No matter how the analyst(am talking about the writer of the review) sugar coats the heartbreak of Noboru, it still didn't explain what happened to Momose. He didn't expound on what Tetsuko said to be a secret during their conversation/reunion. That is key to the whole story, I think so all of us will have closure including Noboru...

The ending lacks closure but I think it was really meant to be enacted that way. Despite the lack of closure, I still think that the film was good. The ending was kind of realistic because not everyone will be able to meet their first love again. Overall, I think the movie still deserves a 4 out of 5 rating. There are only a few movies who prefer to have realistic endings.