Review: WORDS AND PICTURES, A Rivalry In Search Of A Romance 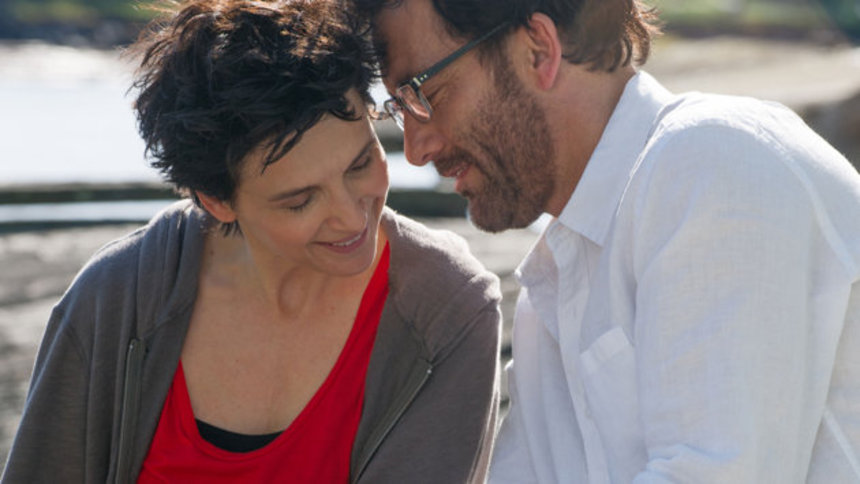 In my youth, a cigarette company advertised their product with the tagline, "What do you want, good grammar or good taste?"

It was a false analogy, of course -- the correct answer is, "Why can't I have both?" -- yet those long-ago words kept echoing through my head while I was watching Fred Schepisi's Words and Pictures, which features excellent, affecting performances by Clive Owen and Juliette Binoche in service of a premise that is as contrived and phony as that decades-old advertisement. Gerald Di Pego's original screenplay sets up the two actors as opposing forces of nature, teachers at a private high school who become rivals mainly because the story demands it.

Jack Marcus (Owen), an alcoholic teacher of an English honors class, earned acclaim with his early published work, but has faded into middle-aged obscurity. He lives off his tarnished reputation, and clings to the annual publication of the school's literary magazine as his potential salvation when the principal (Navid Negahban) and a board member / former lover (Amy Brenneman) darkly hint that his job is in jeopardy.

Dina Delsanto (Binoche), a newly-arrived teacher of an art honors class, earned acclaim with her early artwork, but suffers from a debilitating physical ailment that makes it difficult for her to express herself on a canvas. She lives off her barely-suppressed anger and bitterness, pushing hard on Emily (Valerie Tian), her only promising student, rather than acknowledge her own inadequacies and frustrations. 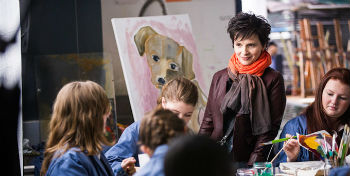 Desperate to keep his job, and amused by the friction he causes by flirting badly with Delsanto, Jack pits himself and his class against the art teacher and her students, arguing for the superiority of words over pictures. For her part, Delsanto has already raged against words, and so quickly engages in the battle, arguing for the superiority of pictures over words. This leads to a supposedly spirited contest that will culminate at a year-end competition, decided upon by the students.

The rivalry is besides the point, of course, yet it actively annoyed me like that ancient ad for cigarettes. The story is set at a privileged school with a small enrollment of students who all appear to be bound for good universities. Has the state of education in this country fallen so low that students -- the best and the brightest, I assume -- need this type of competition to rouse them from their mental slumber? It's a depressing and/or condescending thought that is never touched upon in a meaningful manner; it's simply assumed that these kids require this sort of stimulation.

Alright, so the main point of Words and Pictures is not the rivalry itself, but those who are leading it, Jack and Delsanto (as Jack refers to her). The push and pull of their relationship is the heart of the movie, but it's one that is fed by precious little blood. It remains an entirely schematic romance -- that's not a spoiler, unless you've never seen a movie before -- following entrenched patterns of behavior that have little to do with real life and everything to do with "opposites attract" tropes. 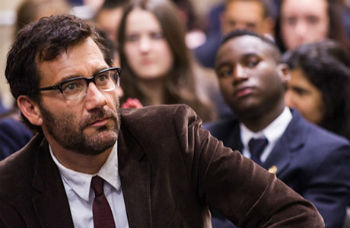 The killer here is that, individually, Owen and Binoche are exquisitely good as broken-down heaps of humanity. Neither, particularly, wants to get better; if only other people would leave them alone, they could completely self-destruct in peace and then wallow in the misery they crave (and probably feel they deserve). But the script demands that they eventually fall into some kind of greater intimacy, which then serves as the linchpin for the resolution of said story, and it never rings true.

For his part, veteran director Fred Schepisi is unable to wrestle the material out of its belabored torpor. He finds fresh ways to frame entirely ordinary moments, and assembles the sequences in the least predictable visual manner possible, but the self-imposed gravity of the piece keeps weighing things down. Individual scenes with Owen and Binoche often come alive in ways that other portions of the picture do not, but the airy scenes are drowned out by too many banal sequences.

Earnest to a fault, Words and Pictures wants to have a trumped-up rivalry as well as effect deep change in its characters, but instead is the kind of movie that gives private school teachers a bad name.

Review originally published during the Dallas International Film Festival in April 2014. The film opens in select U.S. theaters on Friday, May 23. Visit the official site for more information.

Do you feel this content is inappropriate or infringes upon your rights? Click here to report it, or see our DMCA policy.
Clive OwenFred SchepisiJuliette BinocheGerald Di PegoBruce DavisonNavid NegahbanComedyDramaRomance

More about Words and Pictures