Review: The Beauty Of THE FATAL ENCOUNTER Is Only Skin Deep 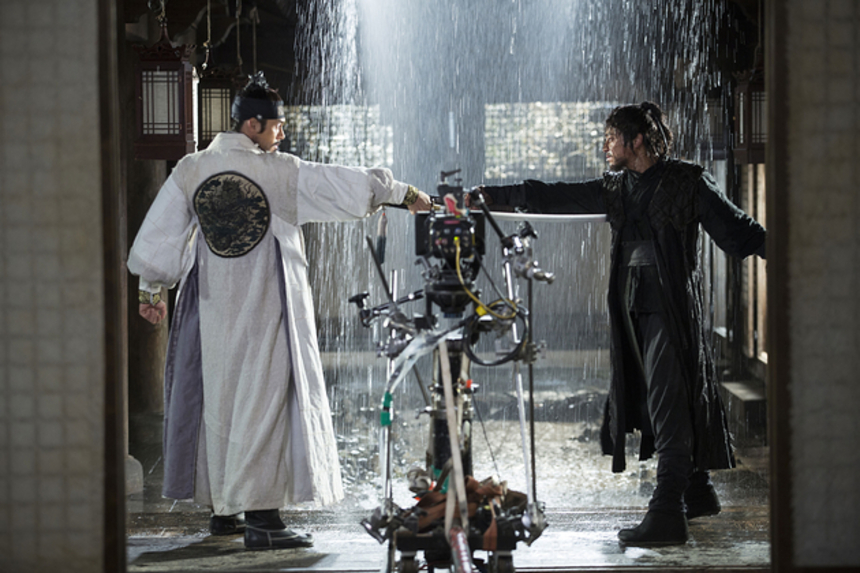 Following a slow few months, commercial Korean cinema returns to the spotlight with The Fatal Encounter, the first of the many period blockbusters that will inundate local theaters through to the end of summer. Following in the footsteps of the 2012 period blockbuster Masquerade (2012), The Fatal Encounter casts a major heartthrob (Hyun Bin) as a king in a tale of royal palace intrigue.

In some ways, this latest commercial offering seems like the ideal film for a modern, consumer-centric Korea. The film was aggressively branded as the return of Hyun Bin (following his obligatory 21-month military service), offers a variety of features designed to entice the majority of the public, and dresses itself up with stunning production values. Yet, like many products available in today's marketplace, The Fatal Encounter's innovation largely ends with its impressive packaging. That's not to say that it isn't a strong package, but as the film lacks depth and eschews cohesion in favor of inclusion, it cannot hope to fully satisfy anyone.

In 1777, a year after ascending the throne, King Jeongjo must be vigilant at all times, aware of the many factions out for his head, without or within his court. He relies on his loyal servant Gap-soo, but when Gap-soo's past with a band of assassins is revealed the King's paranoia escalates. Though banished, Gap-soo's life is spared but when he discovers a plot to murder the King, he returns to the palace to try and save the monarch's life before it's too late.

Period films in Korean cinema used to be dry and stuffy affairs that fit the historical costume drama label to a tee. Following a lull in popularity in the 1970s, the genre was reinvigorated in the 80s and then again in the early 2000s, evolving to suit the increasingly variegated tastes of local viewers. The Fatal Encounter, like many commerce-driven Korean films that have populated multiplexes of late, strives to sate the thirst of all-comers. Whether it be mystery, drama, action, thriller, comedy or romance, there are few genre boxes that it doesn't tick. At times, the film almost dabbles in fantasy, dangerously stretching its already strained narrative balance.

The Fatal Encounter opens with a tense and gorgeously filmed nighttime scene in the King's court. Before all hell breaks loose, the plot drags us back approximately 24 hours and proceeds to recount the incidents that led up to this final confrontation. With stunning camerawork, strong costume and set design and some very fluid editing, it's clear that this period drama is no slouch in the technical department. The same could be said of other recent period fare, such as Masquerade and The Face Reader, but director Lee Jae-kyoo's offering manages to kick things up a notch, demonstrating how sophisticated Korean film crews continue to be. Misty scenes of boats on moonlit lakes, night duels doused in glistening rain and a plethora of complicated dolly and crane shots make Lee's film a fest for the senses, especially when combined with the crisp sound design. However, the potent tones crafted for individual scenes fail to coalesce into an engrossing whole.

Period films often give performers the opportunity to branch out of their normal on-screen personas and such is the case with The Fatal Encounter - though the results vary. In the primary role, though with so many other characters and narrative tangents his is only just a leading one, Hyun Bin shows that he's not just a pretty face but his regal part pales in comparison to Lee Byung-hun's surprising turn in Masquerade. More impressive is the supporting cast, particularly Cho Jae-hyun's grimy villain and the dependable Jung Jae-young as the eunuch Gap-soo. Least convincing is Han Ji-min's overblown and misguided performance as the icy queen.

Director Lee, primarily a TV director whose credits include the 2010 online film The Influence (featuring Lee Byung-hun), demonstrates his technical adeptness with his full-fledged feature debut. However, it feels as though he as brought a well-honed TV drama balancing style with him, which doesn't work as well on the big screen. As such, The Fatal Encounter boasts its fair share of memorable moments and it never looks less than spectacular but, save for Hyun Bin's anachronistic six-pack, there isn't much to find under these flowery king's robes.

Do you feel this content is inappropriate or infringes upon your rights? Click here to report it, or see our DMCA policy.
blockbusterhyun binkoreakorean cinemalee jae-kyooperiod dramathe fatal encounter역린현빈

More about The Fatal Encounter